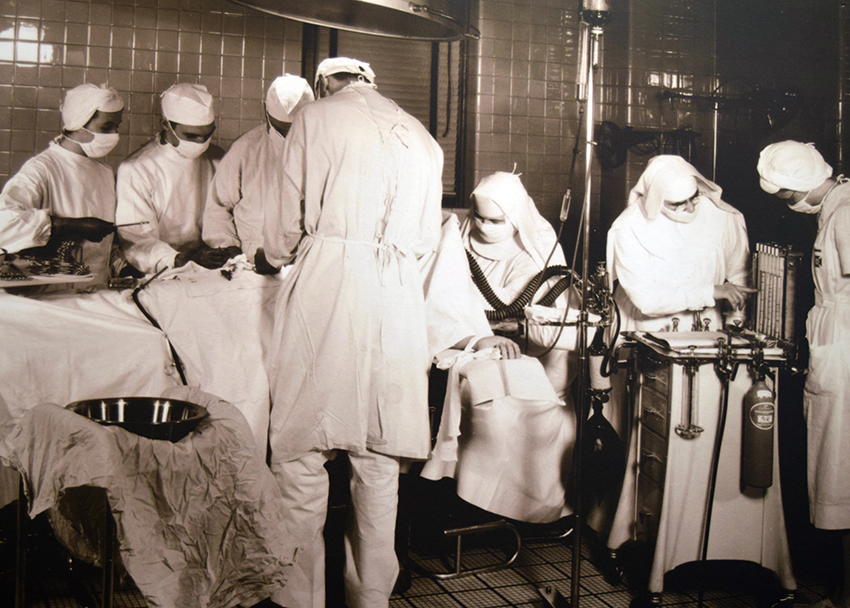 A photograph from the OSF HealthCare archives shows members of The Sisters of the Third Order of St. Francis assisting in surgery. The photo, believed to be from the 1940s, is part of a new exhibit "A Look into the Catohlic Health Care in the Diocese of Peoria" now on display at the Diocesan Museum at the Spalding Pastoral Center in Peoria.

In a year when matters of health are in the daily news, a museum exhibit on Catholic health care in the Diocese of Peoria is both timely and itself impacted by the pandemic.

A timeline chronicles the establishment of many of the Catholic health care facilities around the Diocese of Peoria. (The Catholic Post/Tom Dermody)

“This historic exhibit was planned before the COVID outbreak,” said Sister Lea Stefancova, FSJB, archivist and caretaker of the diocesan museums located at the Spalding Pastoral Center in Peoria. “If there is any connection it is that COVID delayed it. Instead of opening in March, we opened mid-July.”

Pandemic precautions at the pastoral center also mean that the museums — which include the permanent Archbishop Fulton J. Sheen Museum and the Diocesan Museum with rotating exhibits — are open by appointment only.

“I really think this is worth seeing,” Sister Lea told The Catholic Post. The Catholic health care exhibit not only profiles doctors, nurses and religious figures and features a variety of historic photographs and artifacts — the display of past surgical instruments, including a skull drill, will have you counting blessings for technology — it also delves into its faith-based mission and inspiration.

“The exhibit is not comprehensive — there is only so much space,” said Sister Lea. “But I think it’s a glimpse into the ideas that Catholic health care carry.”

Contributors include the archives of OSF HealthCare, owned and operated by The Sisters of the Third Order of St. Francis with health facilities throughout the diocese; the Saint Francis Medical Center College of Nursing; the Peoria Historical Society; and the former St. Francis Hospital in Macomb. 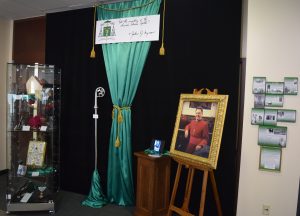 In addition to the Catholic health care exhibit, a memorial display to Archbishop John J. Myers was created following his death on Sept. 24 and will remain at the museum through the end of 2020. (The Catholic Post/Tom Dermody)

The exhibit features six panels devoted to subjects delving into specific areas such as early history, tributes to nurses, motherhood, and the spiritual underpinnings of Catholic health care.

On the wall near the start is a timeline of Catholic health care institutions in the diocese, ranging from the establishment of St. Francis Hospital in Peoria in 1878 to the proposed $237 million OSF Cancer Care Center. In between are photos of hospitals, senior centers, and children’s care facilities from Rock Island to Danville, founded by religious communities including the Sisters of Mary of the Presentation, the Hospital Sisters of St. Francis, the Franciscan Sisters of the Sacred Heart, and others.

The museum has also established a temporary tribute to the late Archbishop John J. Myers, the seventh Bishop of Peoria who died Sept. 24. Like the health care exhibit, it will be available for viewing through the end of the year.