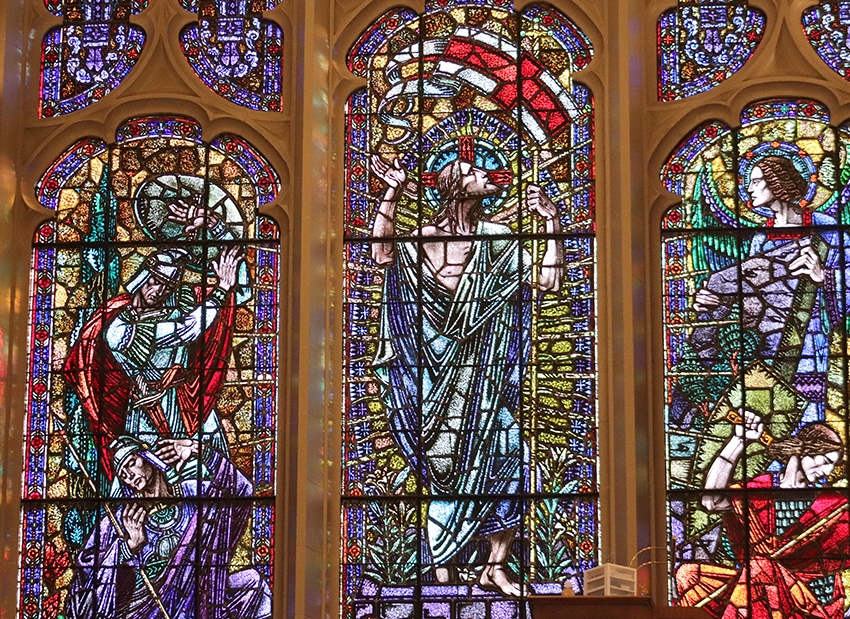 The Resurrection window, which was sponsored by the people of Sacred Heart Church in Moline, can be seen by standing in front of the altar and looking toward the choir loft. It is Father Mark DeSutter's favorite stained glass window in the church and he said it is really striking when the sun is in the south during the winter. (The Catholic Post/Jennifer Willems)

MOLINE — It was hard not to look up at the newly restored windows at Sacred Heart Church here during Mass on Oct. 10. The liturgy that afternoon and those that followed the next morning celebrated the completion of the yearlong project, which involved 34 of the church’s 52 windows.

Father Mark DeSutter, pastor, blessed the windows, as well as plaques that were given to the donors for each one. On Sunday afternoon, people were invited to walk through the church for self-guided tours.

While they hoped to continue the festivities by having a reception, Father DeSutter said pandemic restrictions didn’t allow for that at this time. Rather than delay the celebration, they went ahead without the reception.

“They’ve been out of church so long,” he said of his parishioners. “There’s a sense of continuity that is needed — that church will still be here, that it is going to last through all of the travail we’ve been through.”

The community is still together, he emphasized.

A window depicting the Last Supper and the Crucifixion of Jesus can be seen above the reredos behind the altar at Sacred Heart Church in Moline. This window and the window depicting the Resurrection in the choir loft were among the first restored and reinstalled last October. (The Catholic Post/Jennifer Willems)

“We’re still accomplishing good things together. So we’re not shut down waiting for this all to pass, but we’re still alive and moving forward,” Father DeSutter told The Catholic Post.

The windows are a prime example of what they’ve accomplished together as part of their $3 million “Today Tomorrow Together” capital campaign. Tuck pointing the church and restoring the “irreplaceable” stained glass windows were the goals for Tier I.

The work on the windows was necessary because weather and the Plexiglas covers on the windows caused heat and moisture to build up and compromise the lead. He said some of them were starting to bag and separate.

The estimate for the windows was $800,000 and the project was completed on time and within budget by Bovard Studio of Fairfield, Iowa, according to Father DeSutter.

That was a bargain considering that the craftsmen at Bovard told him it would cost $6 million to $8 million to replace the windows.

“They said the quality of the glass we have here cannot be reproduced today,” Father DeSutter said.

During his homily on Oct. 10, Father DeSutter paid tribute to the Belgian immigrants who wanted to build a church of their own. Despite being poor, they were determined to give God the best of what they had, he said.

When Father John Baptist Culemans, founding pastor, and the parish leaders started looking at what kind of church was needed, they decided to build a Gothic church, like the ones in which they worshipped at home. It would be a statement of faith to the Moline community, Father DeSutter said.

“A Gothic church has soaring ceilings that raise our hearts and minds to God,” he explained. They’re usually built of stone and have great windows of stained glass “because the primary symbol of Christianity is light and darkness.”

Designed by Zachary Taylor Davis of Chicago, Sacred Heart Church is made of Bedford limestone from Indiana. The parish celebrated the centennial of the cornerstone laying last October.

The windows were put in over a 15-year period, so several different studios were used. Parishioners started working with a company in Germany and then moved to companies in Wisconsin, Father DeSutter told The Post.

“If you look at the windows closely you can tell that there’s different artists that have put these together and the subtle differences between the different sets of windows,” he said. “The ones that came from Europe are more vibrant in color and those are the ones that are really striking.”

“The glass was made not only to let in light, but to be a catechetical tool,” Father DeSutter said. “Each window depicts a biblical scene. In fact, there is a biblical citation under each window — at least under most of the windows. If the believer wants to do a prayerful meditation of Christ’s life and Christ’s teachings they could walk from window to window with their Bible in hand.”

The restoration of the windows took more than a year and was done in phases as pledge money became available. The goal was to have people out of the church for short periods of time while the windows were being removed and reinstalled. 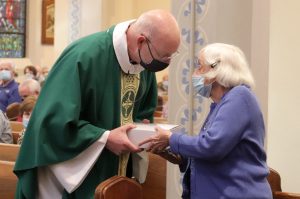 Father Mark DeSutter, pastor of Sacred Heart Church in Moline, presents a commemorative plaque of the Presentation window to Leona Marie. The Marie and Maynard families sponsored the window as a way of preserving their Belgian heritage and “keep the church going for everybody else.” (The Catholic Post/Jennifer Willems)

When the pandemic closed the church for three months, Bovard Studio was encouraged to do as much work as possible.

The only “hiccup” in an otherwise smooth process was when a 75 pound chunk of the limestone frame supporting “The Sacrifice of Melchizedek” window gave way and fell to the sanctuary floor. That resulted in a delay while a replacement was being fabricated in Canada, Father DeSutter said.

Before the pandemic hit, parishioners were able to travel by bus to Bovard Studio to watch craftsmen working on their windows, including the painstaking task of cleaning the tens of thousands of pieces of stained glass.

It was worth it, according to the people who attended Sacred Heart for Mass on Oct. 10.

“It is one of the first things you notice when you walk into this church and they are so bright now,” said Marcia Templeman, who sponsored the window of “The Healing of the Man Possessed” with her husband Bill Peiffer. “They were beautiful before, but they’re amazing now.”

Leona Marie, who is Belgian, said preserving her heritage is one reason she helped to sponsor the window depicting “The Presentation.” She added, “I want to keep the church going for everybody else, too.”

“We might not be able as a community to build a great new Gothic church, but we do have a responsibility to maintain the church that we have,” Father DeSutter said in his homily. “Let’s pray tonight that our church will continue to be a physical statement of faith in the Moline community for many years to come.”