Catholic schools adapt, students happy to be “in person” at end of first quarter 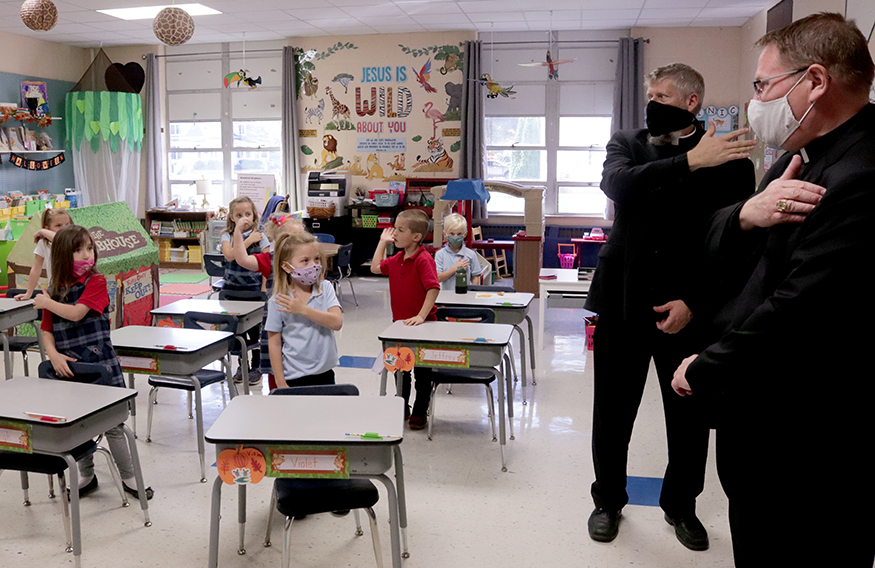 Led by Father Matthew Deptula, pastor, the children in Katie Grivetti's kindergarten class at St. Edward School in Chillicothe show Coadjutor Bishop Louis Tylka how they can make the sign of the cross. Bishop Tylka visited each classroom during his vist on Oct. 13, the feast of St. Edward. (The Catholic Post/Jennifer Willems)

Administrators at Catholic schools in the Diocese of Peoria admitted to having some concerns about the pandemic as they welcomed students back for in-person instruction in August, but as the first quarter ended last week they said the students are happy and doing well — masks included.

“We couldn’t be happier,” said Mike Domico, principal at St. Edward School in Chillicothe. “The fact that we are in every day, affecting these kids every day, face to face, doing what schools are supposed to be doing, full time.”

“We couldn’t be happier. The fact that we are in every day, affecting these kids every day, face to face, doing what schools are supposed to be doing, full time.” — Mike Domico, principal, St. Edward School in Chillicothe

On Oct. 13, he had a chance to share that good news with Coadjutor Bishop Louis Tylka, who celebrated Mass and toured the school on the feast of their patron, St. Edward. Domico said the bishop stayed for more than an hour, answering questions about everything from how he got his episcopal ring to his vocation story.

“The kids were really impressed. He visited every room,” Domico said. “And he was fun. He had a lot of great conversations with the kids and that leaves a mark on these kids.”

As the school year began there was some concern as people worked to follow all the rules to make certain students and staff would be safe, but he said it seems to be second nature now.

“It’s part of our day. And the kids have done wonderfully well,” Domico said. “There’s been no glitches. It’s really ending up being a very, very exciting time.”

Adding to that joy is the fact that enrollment is up and there’s a waiting list at St. Edward these days.

“We’re seeing that the students are adapting very, very well. They seem to be happy to be back,” said Dr. Sharon Weiss, superintendent of Catholic schools for the Diocese of Peoria, who joins the principals for regional meetings via Zoom each month.

She added that things seem to be going well for students who are doing remote learning for a variety of reasons, too. 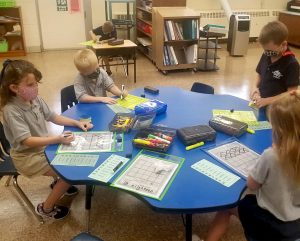 Students at Sts. Peter and Paul School in Nauvoo show how they’re maintaining safe social distancing and wearing masks while they do their work. Principal Lisa Gray said that although there are things they can’t do, such as have reading buddies, they’re willing to make sacrifices to be attending class in person. (Provided photo)

“I think the teachers are doing an excellent job staying in touch with the remote learners. It’s extra work — there’s no doubt,” she said, noting that the staff of the Office of Catholic Schools continues to monitor things to make certain the principals, teachers and staff are staying healthy physically and mentally.

There have been cases where principals, teachers and students have tested positive for COVID-19, but Weiss said the exposures took place outside the schools.

Due to privacy guidelines it is not possible to release names unless those affected choose to do so, according to Weiss. The protocols continue to call for the person to contact the local health department and provide the names of anyone with whom they’ve been in direct contact for 15 minutes or more, within six feet, mask or no mask. They must also quarantine for 14 days.

“We also urge them to call their primary care physician and be tested,” Weiss told The Catholic Post. “Then they notify me.”

Deb Myers, principal at Trinity Catholic Academy in LaSalle, credited their successful first quarter to the cooperation and patience of students, staff and parents.

“Our common goal is to keep the kids in school and keep them in a safe, healthy learning environment. Without a whole team it would not happen,” she said.

“The kids are so resilient and they want to be in school with their friends,” she said. “They have a very clear understanding that in order to do that these are the things we have to do.”

Trinity Catholic is fortunate to have St. Patrick Church and Queen of the Holy Rosary Shrine one block away in either direction, so school Masses continue. Students are divided into two groups — kindergarten through grade four in one and grades five through eight in the other — and they go to alternate churches each week.

The Masses are also livestreamed so parents and grandparents can join their students for Mass that way, since current guidelines restrict them from coming to school Masses for the time being.

One of the major concerns going into the school year was readiness on the part of students who hadn’t been in the classroom since March. Was remote learning enough?

“Our common goal is to keep the kids in school and keep them in a safe, healthy learning environment. Without a whole team it would not happen.” — Deb Myers, principal, Principal, Trinity Catholic Academy in LaSalle

Lisa Gray, principal at Sts. Peter and Paul School in Nauvoo, said the students are doing pretty well. While there was some loss, “it wasn’t astronomical because we were able to monitor that.”

“What we’re looking for is growth, so we take them from where they are, no matter where they are, and we’re going to look for growth,” she said. “That’s how we’re approaching it.”

Not only did she credit the teachers for their hard work last spring, but Gray gave a “shout out” to the parents for doing as much as they did.

Domico said the teachers at St. Edward also “stepped up” quickly in the spring to communicate with their students any way they could.

“They actually delivered 80 to 90 percent of the material they normally would have delivered had the kids been there,” he told The Post. “I’m telling you, it was wonderful.”

“We have teachers who will go above and beyond no matter what,” Weiss said, noting that the diocese’s 42 Catholic schools are “remote ready” should it become necessary again.

“They’ll do the research and make remote learning the best possible,” she said.