The family of Archbishop Myers remembers the generosity, laughter of “Parent No. 3” 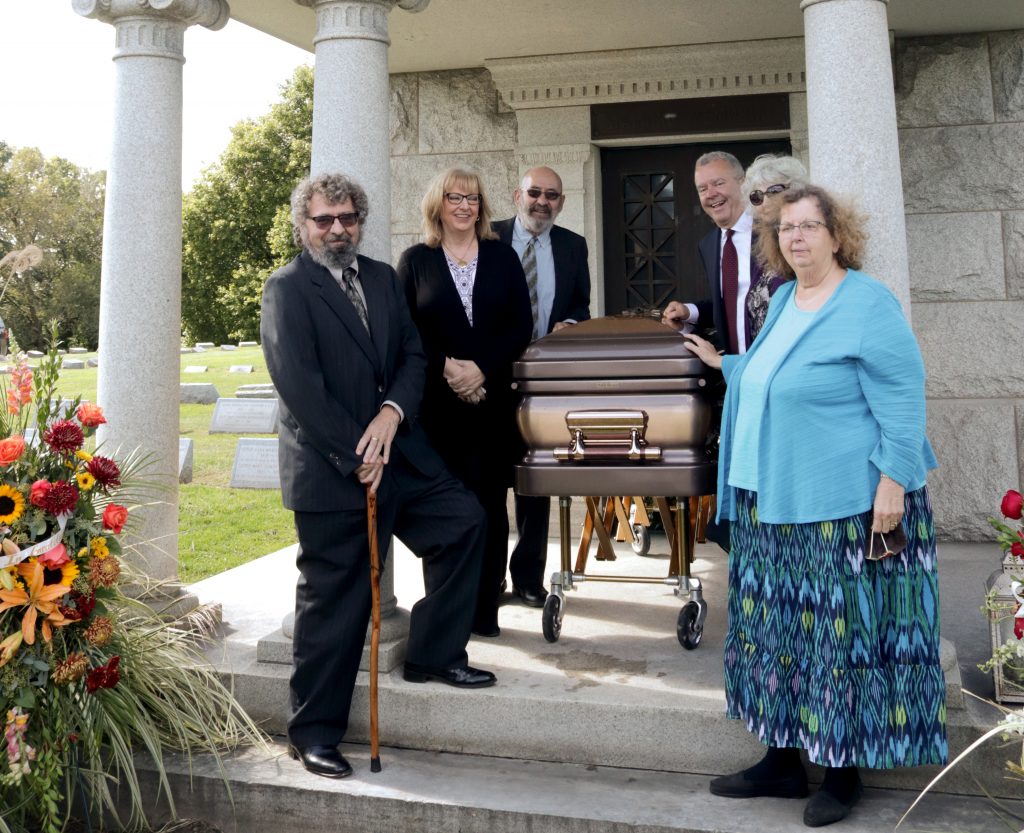 The siblings of Archbishop John J. Myers gathered for one last family photo at the entrance to the Bishops' Mausoleum at St. Mary's Cemetery in West Peoria on Oct. Sept. 30. They are (clockwise from left) Bill Myers, Loretta Malley, Larry Myers, Don Myers, Mary Didier and Elizabeth Myers. (The Catholic Post/Jennifer Willems)

There are a few other names for the late archbishop that are reserved to brothers and sisters only and won’t be shared here, although they are used lovingly and with great joy.

“Somehow — I think it was because of our mom and dad — we’ve always been tight as a family, all seven of us,” said Bill Myers of Earlville, the third of those seven siblings. “We’re not only brothers and sisters, but we’re good friends and that’s such a gift.” 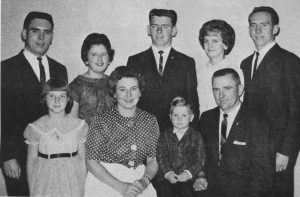 The Myers family of Earlville posed for a family portrait in the summer of 1963. In the front row are Loretta, Margaret Donahue Myers, Donald, and M.W. “Jack Myers. Behind them are (Archbishop) John, Elizabeth, William, Mary, and Lawrence.

Bill said he always called his brother “Parent Number Three” since he was the oldest. Noting that their parents, M.W. “Jack” and Margaret (Donohue) Myers, were hard-working people, Bill remembered that Archbishop Myers would often look after his younger siblings.

“He was always so close to our mother, helping around the house,” said Bill. “Spiritually, he and our mother were two of the people who had the deepest faith I’ve ever known. Thank God, all of the kids have kept the faith as best we could.”

“Parental” is also a word used by Don Myers of Bloomington, the youngest of the seven siblings.

“His first assignment was Holy Family (in Peoria) and he would come home on his day off,” Don told The Catholic Post at the luncheon that followed Archbishop Myers’ funeral Sept. 30. “He would drive home Monday morning and drive back after supper. . . . He would be the one to say, ‘How are your grades going?’”

Since Don was born shortly after Archbishop Myers left for Loras College in Dubuque, Iowa, he wouldn’t get close to his big brother until they were both living in Peoria. At that point, “I talked to him almost every day.”

As they sat and shared memories of their brother, the Myers family talked about his generosity within the family and beyond. They said it was never something he discussed, however. 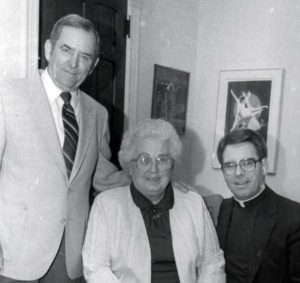 Bishop Myers with his parents, Jack and Margaret.

“He had a college fund set up for even the grandchildren,” according to his sister, Elizabeth Myers of Peoria. “He put it in when they were born and it built up so it would help them.”

And Archbishop Myers wasn’t just a spiritual leader to the people of the Diocese of Peoria. Family members said he presided at marriages and that his nephews and nieces received their First Communion from “Uncle John” during the Easter liturgies at St. Mary’s Cathedral in Peoria.

Don Myers said that when Archbishop Myers was sent to lead the Archdiocese of Newark, New Jersey, they thought the tradition had come to an end. On the contrary, the family celebration moved to New Jersey when it was time for Don’s daughter to make her First Communion.

“We always had Easter at the cathedral house,” he said, adding that Thanksgiving offered another opportunity for Archbishop Myers to play host. “He liked having the family events.”

“One of my favorite things was when he took us on a pilgrimage to Israel,” said his sister, Mary Margaret Didier of Sugar Grove. “It was my first time to go across the ocean, out of the country. To think that we walked where Jesus walked.”

In addition to the Holy Land, they also traveled to Ireland, Poland, Spain, Portugal and Italy, including a very special trip to Rome to see Archbishop Myers receive his pallium from Pope John Paul II on June 29, 2002.

“We’ve been on a lot of wonderful trips together,” said Elizabeth Myers.

“He was just a lot of fun to be around when we were younger,” oldest niece DeeDee Didier Gould of Plano told The Post. “He used to spoil us nieces and nephews. Just special little treats for us.”

She said it was unfortunate that it was Archbishop Myers’ funeral that brought everyone to Peoria this time. “But we’re all together for him.”