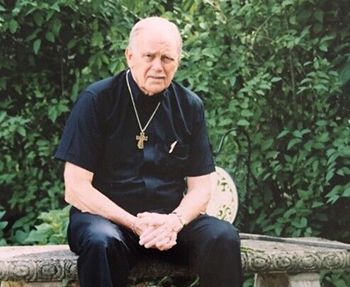 WENONA — A Mass of Christian Burial will be offered at 11 a.m. on Friday, Oct. 9, at St. Mary Church here for Deacon Charles P. Zulz, 84, who served four area parishes as a permanent deacon and in pastoral care at Illinois Valley Community Hospital.

Franciscan Friars will preside at the funeral Mass. Burial with full military honors will take place at St. Mary’s Cemetery in Wenona.

Visitation was planned in the church from 4 to 7 p.m. on Thursday with a rosary to follow. Additional visitation will begin Friday at 10 a.m.

Deacon Zulz worked at Owens Illinois in Streator, as a part-time police officer in Wenona, and in pastoral care at Illinois Valley Community Hospital. He was ordained as a permanent deacon of Diocese of Peoria on May 18, 2002. Among his diaconate service was taking Communion to and visiting the homebound for the parishes of St. Mary, Wenona; St. Ann, Toluca; St. Patrick, Minonk; and St. John, Lostant.

He is survived by one daughter, Michelle Rippel of Rutland; three sons, Mark (Mary Jo) Zulz of Washburn, Matthew Zulz of Wenona, and Mike (Sheila) Zulz of Bloomington; 11 grandchildren; eight great-grandchildren with one on the way; and a sister, Rita Marshall of Streator.

In addition to his wife, he was preceded in death by grandchildren Jeremy, Adam, and Charles Zulz; a sister, Kathryn Harms; and a brother, Frank J. Zulz Jr.