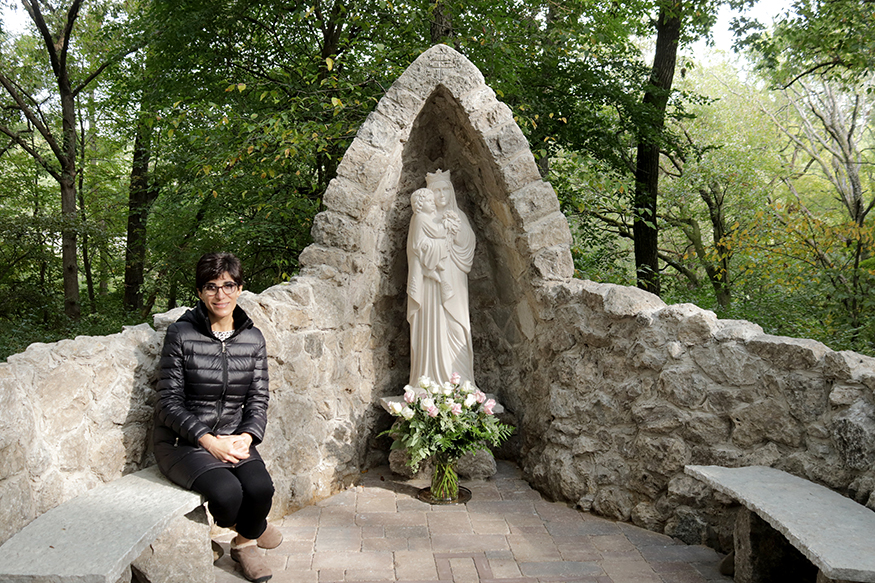 Dr. Michele Couri sits in the new grotto that was built over the summer in a wooded area in back of her house in Peoria. The statue of Mary and Jesus was carved in Lebanon. (The Catholic Post/Jennifer Willems)

In a wooded area in the back of her north Peoria home, Dr. Michele Couri finds the peace she needs to face challenges big and small, with help from the Virgin Mary, the Child Jesus and St. Sharbel.

It comes in the form of a grotto constructed over the summer by a family friend, Patrick Deibel, and featuring a sculpture of Virgin and Child by artist Nayef Alwan of Aitou, Lebanon. In Mary’s hands are six roses, one for each of the six children Couri shares with her husband, Tim, and on the folds of the Blessed Mother’s mantle are the cedars of Lebanon.

A Maronite cross is etched in the stone at the peak of the grotto.

Hanging on a tree that faces the grotto is a stone likeness of St. Sharbel, who had a special devotion to Mary, according to Couri. Deibel carved the saint’s face and encased it in a “house” made of cedar. 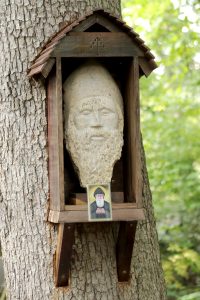 The stone image of St. Sharbel faces the grotto because the saint had a great devotion to Mary, according to Dr. Couri. (The Catholic Post/Jennifer Willems)

“I have always had this devotion to Mary. Over the last couple years I would go out to the grotto at Lourdes in Germantown Hills,” she said.

“One day I was sitting back here and I thought, ‘I wonder if we could ever build a small grotto here?’ I just had this feeling that it was the right thing to do and I just felt it would be so special to have that in the backyard,” Couri told The Catholic Post.

The place of prayer has also become a vital way for her to fight a rare form of blood cancer known as myelofibrosis. She has had the disease since late 2010 and was able to control it with an oral chemotherapy until two years ago. Now a bone marrow transplant is needed.

No match has been found yet, but Couri says blessings abound.

“Even though I’m facing my own mortality, I have this incredible peace about things right now. I know it’s in God’s hands and I know he has a plan,” she said. “I wish I didn’t have this, but it’s my cross to bear and I’m going to do it with grace and be an example for my kids.”

The youngest of six children, Couri was born and raised in Peoria. She attended Kellar Elementary School, Richwoods High School and Bradley University before going on to study medicine at the University of Illinois. She did her residency at OSF Saint Francis Medical Center in Peoria.

She has worked as an obstetrician and gynecologist, but gave up obstetrics about nine years ago. She continues to see patients, but has a limited schedule.

Couri and her husband have deep roots in Lebanon. Grandparents on both sides came from Aitou and when the couple traveled there for the first time last year it was a transformative experience, she said.

The grotto became their way to honor their heritage.

“My husband and I both felt such a deep connection when we went there and such a gratitude to our ancestors, who sacrificed so much,” Couri said. “The statue, coming from the village where it all started, was really special.”

Dr. Couri encouraged people to pray and also consider registering to be in the donor pool for bone marrow through Be the Match. Even if it doesn’t result in a match for her, it could help someone else who needs it.

Made of stone found in the hills of Lebanon, the statue of Mary and Jesus weighs about 850 pounds. It was sent by air from Beirut to Chicago and then trucked to Peoria. It arrived at the beginning of September and was blessed by Chorbishop Faouzi Elia of St. Sharbel Church in Peoria.

While she was waiting, the port of Beirut was rocked by an explosion on Aug. 4 that killed 200 people, injured 6,000 and left 300,000 homeless. There was no loss of life for the extended Couri family in Lebanon, but the sculptor and his wife, with whom they had become close, have a daughter who is a physician at a hospital that was hard hit.

She is safe, but her colleagues and patients were affected, Couri said.

In the weeks since, the Couris have been working with aid organizations to send financial support.

“That country has seen such hardship in its history, but it always rises up from tragedy,” Couri said. “When (the statue) came it was another reminder of how resilient Lebanon is and how resilient the people of Lebanon are and in my heart it was such a celebration when she came.”

CROSS CAN BE BLESSING

Each day Couri sits in the grotto to pray the rosary, the Memorare novena, the St. Sharbel Chaplet and the Divine Mercy Chaplet. “Those are my four that I don’t ever miss because they bring me the most peace,” she said. 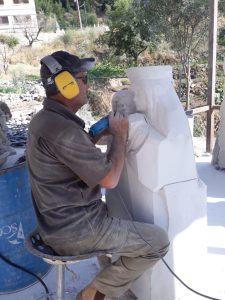 Sculptor Nayef Alwan works on the statue of Mary and Jesus commissioned by Dr. Couri in his workshop in Aitou, Lebanon, the same village where Dr. Couri’s grandparents were from. (Provided photo)

The grotto is like a magnetic field, she explained.

“You can’t stay away. She draws you in. Once you come out here you’re just compelled to come and sit and talk to her — at least for me,” Couri told The Post.

There are three things people can do to help her fight the myelofibrosis, she said, and the first is to pray. “At the end of the day, that’s the most important.”

She also encouraged people to consider registering to be in the donor pool for bone marrow through Be the Match. Even if it doesn’t result in a match for her, it could help someone else who needs it, she said.

Donating blood is also important for many reasons, but especially since a bone marrow transplant procedure requires a significant amount of blood products.

“What I’ve learned in this is we all have crosses to bear. We all have our troubles,” Couri said. “But that cross that we bear, it’s a blessing to be able to bear it. It’s kind of our ladder to heaven.”