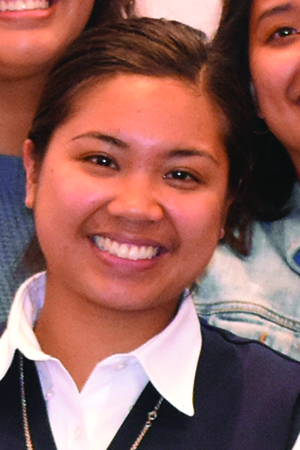 Pamela Suresca is the former director of mission formation for weDignify, a pro-life organization based at St. John's Catholic Newman Center in Champaign. She is now a postulant with the Salesian Sisters of St. John Bosco.

Pamela Rose Suresca has nothing but gratitude for the priests, religious and laity of the Diocese of Peoria. Not only did they foster her call to life as a member of the Salesian Sisters of St. John Bosco, but they helped her pay down her student debt so she could pursue that “miracle.”

She was received into the aspirancy in New Jersey on Sept. 7, 2019, and began her postulancy last month in Bellflower, California.

“I really believe I’m living the life the Lord has called me to live in great freedom and joy.” — Pamela Rose Suresca

The former director of mission formation for weDignify, a pro-life organization based at St. John’s Catholic Newman Center in Champaign, Suresca needed to reduce her student loans from $139,000 to $16,000 in order to be accepted into the Salesian community. She dubbed the effort #projectmiracle and went to work, serving as an assistant to Father Anthony Co at St. Patrick in Urbana, taking odd jobs, selling many of her personal possessions, and writing letters seeking support.

Along the way she got help from her “Salesian family” by way of the Salesian Cooperators in Champaign, who helped her set up fundraising events. Her Divine Mercy group at St. Matthew Parish also played a major role in supporting her in all ways, including spiritually.

Little did she know that the Salesian Sisters, formally known as the Daughters of Mary Help of Christians, were looking into a grant to help her out. Confident that she was doing everything she could, the vocation director told her to make the trip to the motherhouse for the eastern province in North Haledon, New Jersey.

“We know the Lord is going to provide. Buy a ticket,” Sister Theresa Lee, FMA, told her.

Suresca received her aspirancy medal in October 2019 and has spent the last year living in community, experiencing religious life, and studying theology so she can teach once she has professed first vows. Her formation included assisting at a Salesian girls high school, serving as a “lunch lady” and moderating the pro-life club. That took her to Washington, D.C., for the March for Life with her students. 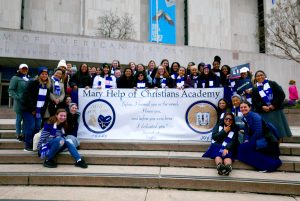 Pamela Rose Suresca, seated bottom right, spent part of the last year assisting at a Salesian girls high school and serving as moderator of its pro-life club. She has completed her aspirancy with the Salesian Sisters of St. John Bosco and has begun her postulancy, thanks to help from people in the Diocese of Peoria. (Provided photo)

When the pandemic hit, the community had to quarantine and give up plans for their summer camp, but that provided an unexpected blessing for her.

“I really was able to go deeper into my relationship with Jesus, which is time I really needed and time that is really necessary in any discernment,” Suresca said.

If God is continuing to call her forward next spring, she will enter the novitiate for two years. “God willing I will profess my first vows in August 2023.”

“I really believe I’m living the life the Lord has called me to live in great freedom and joy,” Suresca told The Post.

Even though she grew up in New Jersey and her family now lives in Nevada, Suresca said she brags about the Diocese of Peoria all the time.

“I came from a place, I believe, that breeds vocations. I know I’m not the only one from that diocese that can be grateful for their vocation,” she said.

While she doesn’t know the next time she’ll be in central Illinois, Suresca said she continues to pray for everyone in the Diocese of Peoria.

“I didn’t grow up in Illinois, but it was a very foundational time in my vocation