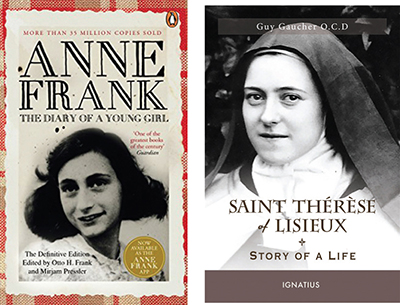 I’ve been revisiting the works and words of a couple of old friends recently.

I first met Anne Frank in junior high. She was funny, and sometimes honest to the point of being bracingly “frank,” but very genuine.

Anne was a child of Israel, and I hadn’t encountered many Jewish kids during my Catholic school years. I learned that no matter the difference of background, you can always tell the heart of a true friend — a “kindred spirit,” as another Anne (of Green Gables) might say.

Sometime later, in my early 30s, I was introduced to Thérèse Martin. I found the way she handled things very instructive. Thérèse wasn’t controlled by what others might think. While she admitted there had been a time when she was painfully sensitive, God got her past that. Forever after, if she was good with Him, she was good to go.

Thérèse was more of a cloistered, private type of person than Anne, but could also be very funny, “I am very far from practicing what I understand.” Beyond her natural reserve, her soul was an open book.

Anne dreamed of being a Hollywood movie star, and plastered the walls of her room with pictures cut out of movie magazines. Thérèse wanted to be a missionary to foreign lands, and made an altar niche in the garden wall of her family home, adorning it with flowers.

As it turned out, neither would live to make their childhood dreams come true, but millions would dream bigger because of them.

Thérèse, also known as Thérèse of Lisieux, the “Little Flower,” died behind her convent’s walls of tuberculosis at age 24. At her own request, she had always remained a novice, required to ask permission of fully professed sisters for the smallest things, and would never be elected to any position of importance within the cloister.

That was before the posthumous publication of her spiritual memoir, “The Story of a Soul,” resulted in her election as a Doctor of the Church — one of only 36. Her humble “little way” of small sacrifices and much love was deemed a pure path for finding one’s way home to Christ.

Anne died in the Bergen-Belsen Nazi concentration camp in 1945. The immediate cause of death was typhus, but a more honest death certificate would have read, “Hitler’s Final Solution.”

Prior to her capture, Anne spent more than two full years with her parents, sister, and some family friends in a secret Amsterdam annex over a warehouse before being discovered by the Gestapo. Her diary entries were left scattered over the floor as worthless.

That was a slight miscalculation. “The Diary of a Young Girl” has been translated into more than 70 languages, and been the subject of several movies and plays.

Thérèse was consigned willingly to her convent cell, Anne unwillingly to her hidden attic, yet both spilled light across space and time. In re-familiarizing myself with their voices recently, I realized anew how being privately true to yourself can blossom into blessings for others.

The God of Abraham can use the diary of a young Jewish girl written in occupied Amsterdam to help readers choose hope when there may seem no reason for hope, as Anne did when she testified, “In spite of everything, I still believe that people are really good at heart.”

He can likewise use the memories and musings of a novice nun to help show faith fully alive, as when Thérèse exulted, “For me, prayer is a surge of the heart. . . .”

Yes, it’s been good to meet heart-to-heart under the reading lamp with these two again.

PAUL THOMAS MOORE is a Catholic commentator and singer-songwriter. He and wife Marilou attend St. Mary of Lourdes in Germantown Hills, Illinois. Write to him at paulthomasmoore@hotmail.com.