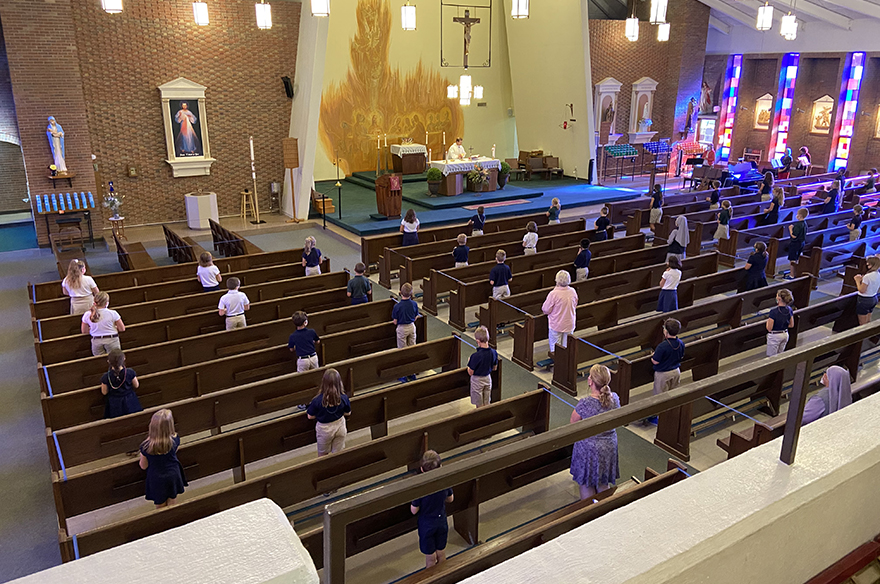 School Masses are celebrated on Fridays at St. Patrick in Washington. To keep the appropriate social distancing, only three classes can be in the church at a time. The liturgy is livestreamed to the rest of the students in their classrooms through Google Meet. (Provided photo)

Students and teachers aren’t the only things that can be found in Catholic schools this year.

As with their public school counterparts, Catholic elementary schools and secondary schools in central Illinois have seen COVID-19 tag along. While this can be disconcerting it wasn’t unexpected, according to school officials.

“We’re very aware of the fact that we’re going to have people testing positive all year long — it’s the nature of the sickness, of the pandemic. So we’re not surprised by a positive case,” said Sister Sara Kowal, SCTJM, principal at Peoria Notre Dame where five or six people have tested positive.

“We hope obviously that we don’t have transmissions in the school itself,” she told The Catholic Post. “So far the positive cases we’ve had have not been transmitted in the school.”

“We’re very aware of the fact that we’re going to have people testing positive all year long — it’s the nature of the sickness, of the pandemic. So we’re not surprised by a positive case.” — Sister Sara Kowal, SCTJM, principal, Peoria Notre Dame

“I think parents realize there are going to be positives because you can’t pick up the paper without reading there have been positive cases” in a variety of settings, said Dr. Sharon Weiss, superintendent of Catholic schools for the Diocese of Peoria.

She added that having a school system spread out over 26 counties, each of them dealing with fluctuating positivity rates, there are bound to be some challenges.

“We keep studying each community,” she said. In McLean County, for example, where the provisional seven-day rolling positivity rate was 10.6 percent as of Sept. 7, she has asked the principals to look at the communities around them and the age groups involved to see if colleges like Illinois State University are driving up the numbers and check in with the Bloomington-Normal public health department for their guidance.

“We’ve got our eye on the thing,” Weiss said. “We’re watching to make sure that if there is a reason we need to have a school closed for an amount of time to disinfect or help it to dissipate we would definitely do that.”

In the first few weeks of classes, positive cases of COVID-19 have been reported at Alleman High School in Rock Island and Central Catholic High School in Bloomington, as well as Peoria Notre Dame.

Weiss said there have been positive cases in a few elementary schools, too.

Click here to see a video from Bishop Jenky and Coadjutor Bishop Tylka welcoming students back to Catholic schools.

“Either they were positive themselves or there was somebody in their family that’s positive. That’s been the case more so with the grade schools, that they’ve been exposed to a family member that has tested positive for COVID-19,” Weiss explained. “So then they’re immediately quarantined at home, too, because they’re in direct contact obviously with their family.”

Since the Office of Catholic Schools assured parents, families and school staffs that they would do their best to keep the schools as safe and healthy as possible, a Diocesan Plan for the Reopening of Schools was developed and posted to the office’s website at cdop.org. It has been updated numerous times as new information becomes available.

The most recent update came Aug. 31 to include revised infection protocols after learning that nonpublic as well as public schools must report all positive cases to their local department of public health in addition to the Office of Catholic Schools. Weiss said this clarification came out of a helpful discussion with the Peoria County Public Health Department.

And while the schools are asked to notify parents when a positive case occurs, the department of public health will do the contact tracing, she said. She has provided a letter for Catholic schools to use.

“Fear is going to be fear,” Weiss told The Catholic Post. Quoting one pastor, she said faith cannot be replaced by fear, however. “You have to have faith.”

Another way to conquer fear is to provide as much information as possible, she said.

“The more we communicate, the better it is,” Weiss said. “That fear creeps in when they don’t know.”

One of the constants in this year of change is that school Masses are still a priority.

In a letter dated Aug. 22, Msgr. Philip D. Halfacre, vicar general of the Diocese of Peoria, said the same protocols observed at weekend liturgies also apply to school Masses. That means face coverings are to be worn when not speaking and appropriate distancing is required, whether Mass is celebrated in a church, chapel or gymnasium.

“For the present moment — because of the limited seating availability and for the safety of everyone involved — it is the expectation that only students and school personnel be permitted to attend school Masses,” Msgr. Halfacre wrote.

Father Geoffrey Horton, chaplain at Central Catholic High School in Bloomington, said their solution is to have a monthly Mass with one class present but socially distanced in the school auditorium. About 71 students at a time can be accommodated.

“We’re streaming by Facebook Live to all the other homerooms and bringing Communion to them,” he said. “Even the gym doesn’t quite hold everybody and Illinois weather being what it is, it’s too dicey to plan on going outside.”

The benefit of livestreaming is that anybody who wants to tune in to Central Catholic’s Facebook page can join the students for Mass that way, Father Horton said.

At Schlarman Academy in Danville, which enrolls students in pre-school through high school, the chapel at the north campus and St. Paul Church, adjacent to the south campus, will be used to make Mass available, according to principal Mark Janesky.

Where all the students used to attend Mass once a week at St. Paul Church, two elementary grades at a time will go on Tuesday and Wednesday at 10 a.m. That way, they will still have Mass, but every other week, he said.

The older students will attend Mass one grade at a time in the chapel at the north campus.

“The chapel is decently sized and normally I would tell you I can get all my freshmen and sophomores together,” Janesky said. “Now it’s just going to be freshmen, for example.”

At Marquette Academy in Ottawa, the diocese’s other school enrolling students in pre-kindergarten through high school, scheduling Mass has been “very tricky,” said principal Brooke Rick.

“We can’t even bring our entire grade school together in the church. So we have gotten creative,” she said.

Students in kindergarten and grades two, four, six and eight go to St. Columba Church one week and grades one, three, five and seven go the following week. Rick said they are working on livestreaming the Mass so that the alternate classes can watch from their classrooms.

“At the high school, we offer an optional chapel Mass on Tuesdays for any student interested during our extended homeroom time,” Rick said, adding that the chapel can only hold 30 due to the COVID-19 restrictions. “We actually had to make a sign-up sheet as we had a full house each week so far.”

All-school Masses are planned each month, either in the gym or the football field. This allows students to spread out enough to make social distancing possible.

While there have been no positive cases of COVID-19 within the school, Rick said she knows it’s only a matter of time. They are prepared to shift those students to Marquette’s virtual learning program and continue on.

At Peoria Notre Dame, “half-school” Masses with freshmen and seniors one day and sophomores and juniors another are planned each trimester. Weekly Masses will rotate through each of the school’s six “houses.”

“Students will still have the same number of Masses they normally attend, just different ways of doing it,” said Sister Sara.