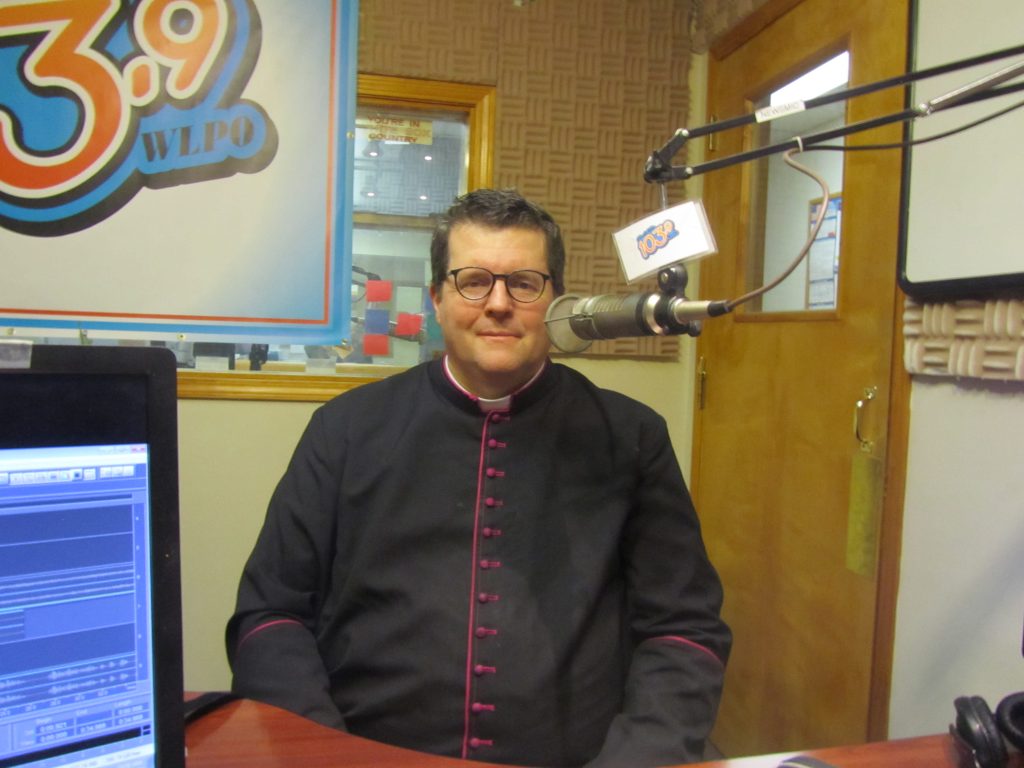 Msgr. Richard Soseman is pictured in the studios of WLPO 103.9 FM, where he records "JMJ Moment." (Provided photo)

PERU — Msgr. Richard Soseman has never been afraid to use the media of the day to reach out to people with messages of faith. That has included everything from texts and instant messaging to Facebook and the printed word.

Now he’s adding radio to the list, and he’s doing it with help from Venerable Archbishop Fulton J. Sheen and Jesus, Mary and Joseph.

In February, Msgr. Soseman started to offer five-minute reflections for listeners of WLPO 103.9 FM, a classic rock station in LaSalle. “JMJ Moment” can be heard at 8:35 a.m. on Sunday morning.

In April the program was picked up by Catholic Spirit Radio, which is based in Bloomington and also broadcasts in Pontiac and Lincoln. It airs on Saturday at 9 p.m. and Sunday at 2 p.m. and is available as a podcast at catholicspiritradio.podbean.com.

“People liked the ‘JMJ Moment’ before the pandemic, but then it became a vital lifeline for people who wanted to hear something on Sundays,” Msgr. Soseman said, referring to when churches were closed due to safety precautions. “I would hear back in so many ways — notes left with envelopes here in the mailbox at St. Valentine or on Facebook.”

Also the pastor of St. Mary and St. Joseph in Peru, he said people relied on the program as a way to have an experience of parish life and urged him to keep it up.

The program grew out of a relationship he developed with WLPO last November, when he was invited to join discussions about burial customs on the morning show. Msgr. Soseman explained that the radio station has a segment about local obituaries.

When he was asked to consider a regular program on Sunday mornings, he agreed. There was a minimal fee involved, which was paid initially through the evangelization budget at St. Mary Church and now includes the backing of all three Peru parishes.

The producer for “JMJ Moment” is Clare Bennett, production coordinator at Starved Rock Media and a parishioner in the LaSalle-Peru Catholic community.

“JMJ” is reminiscent of what Archbishop Sheen would write at the top of the blackboard during his popular television show, “Life Is Worth Living.” People didn’t know what that stood for since many of his viewers weren’t Catholic and it became an opportunity for him to discuss consecration to Jesus, Mary and Joseph, said Msgr. Soseman, who is vice postulator for Sheen’s cause for canonization.

His “JMJ Moment” is designed to offer insights into the readings for the coming Sunday, deal with issues that have come up during the week, or focus on a point of faith.

“That’s part of what the outreach through the ‘JMJ Moment’ is all about, is trying to remind everyone that Jesus loves them, that he wants a relationship with them through his church, no matter who they are. . . .” — Msgr. Richard Soseman

“A lot of it during the COVID time has been trust in God and surviving through difficulty and how that’s part of what we do as Christians,” Msgr. Soseman said. “So reassurance has been a big part of it during some of these COVID programs.”

To make certain he stays within the timeframe allotted and doesn’t get tongue tied, he writes out his remarks. Even so, tries to remain “chatty” and “down to earth” so he can relate to people.

Seminarian Ryan Mann also had a chance to offer reflections, filling in twice for Msgr. Soseman while serving in the Peru parishes over the summer.

The show was originally scheduled for six months and has been extended until the end of the year.

“I’ve always believed you shouldn’t shrink back from presentations of the faith in public life,” Msgr. Soseman said. “As a pastor, my responsibility is not just for the registered envelope holders of my parish, but for anyone who lives in the territory of where I am pastor.

“That’s part of what the outreach through the ‘JMJ Moment’ is all about, is trying to remind everyone that Jesus loves them, that he wants a relationship with them through his church, no matter who they are. . . . They should know that Jesus loves them and that the church is there for them,” he said.

His next outreach? Bicycle meditations, filmed on a cellphone attached to his handlebars while he pedals through town. A longtime fan of cycling, Msgr. Soseman said people are enjoying these Facebook posts, especially the scenery and when he says “Good morning” to people as he rides.

To find these, go to Friends of the Peru Catholic Parishes on Facebook.