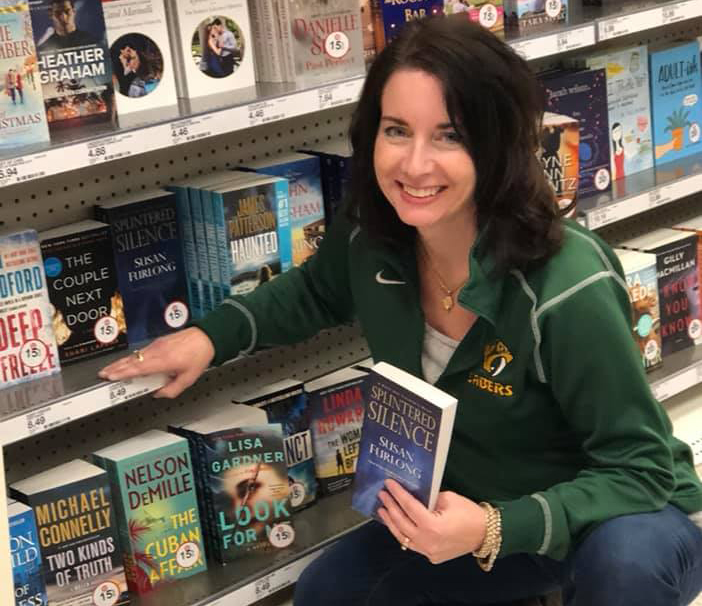 Susan Furlong-Bolliger of Savoy, a mystery novelist and member of St. Thomas Parish in Philo, holds a paperback copy of her book "Splintered Silence" on the shelf of the Target store in Champaign. (Photo from the Susan Furlong - Author Facebook page)

“The source of justice is not vengeance but charity.”

But you won’t find “Shattered Justice” in your local Catholic bookstore. The third and final installment of Furlong’s popular Bone Gap Travellers series, like its predecessors, is gritty crime fiction. There are gruesome murders to solve, a protagonist who struggles with addictions as she confronts personal demons from her past, and examples of bigotry experienced by an ethnic group in rural Tennessee.

“Being Catholic is all that I am. Writing is what I do.” — Susan Furlong-Bolliger

So let the debate begin on whether Susan Furlong-Bolliger – a member of St. Thomas Parish in Philo – is a Catholic who is a writer or a Catholic writer. But spend any time with this delightful mother of four and you’ll realize the answer is no mystery.

Susan is both. She is a faith-filled Catholic and a gifted storyteller.

“Being Catholic is all that I am,” she told The Catholic Post in a recent interview at her family’s suburban home just south of Champaign. “Writing is what I do.”

Quoting the Benedictine motto of “Pray and Work,” Susan said that if one prays while working, faith will come through “whether the world recognizes it or not.” 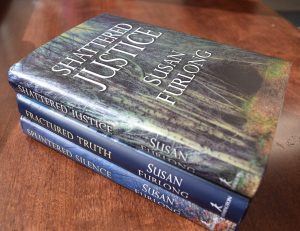 For business reasons, it was good that neither Susan’s New York-based publisher (Kensington Books), nor her agent recognized the author’s personal faith reflected on the pages of the Bone Gap Travellers series. Publishing is a tough, market-driven business and Susan was writing for the widest possible audience. Yes, the ethnic group depicted – real life itinerant workers known as Irish Travellers – are a predominantly Catholic people. And the sacrament of confession is a key part of the first book’s storyline.

Her agent did, however, question Susan about the saint quotes that open each book, eventually concluding they fit well with the titles and stories.

For example, “Splintered Silence” — the first in the series — begins with the words of Abbot Finton of Ireland: “May you have the commitment to know what has hurt you, to allow it to come closer to you and, in the end, to become one with you.”

Similarly, Susan knows from experience that God is present and can bring good even from tragic events.

Born in Michigan and raised mostly in North Dakota, Susan, her husband Nyle Bolliger – a computer operations engineer at the University of Illinois – and their children were living in Homer in late 2013 when a tornado roared through Champaign and Vermilion counties. The town of Gifford was especially devastated, but the Bolliger home received only minor damage.

Among those who came to assist in rebuilding efforts was a group of Irish Travellers from Tennessee. The Bolligers befriended one of the families, and Susan became fascinated by the group’s nomadic lifestyle and esoteric customs.

Fresh off a successful series of light, “cozy” mysteries based among the peach orchards of Georgia and bearing clever titles such as “Peaches and Scream” and “War and Peach,” Susan researched the Irish Travellers and made the group the focus of a new, deeper and more complex storyline. Her proposal was accepted and she signed a major contract with Kensington Books. There would be a series of three books in hardcover, audio, and paperback printed in the tens of thousands and distributed through national bookstores and major retailers. The series would eventually be reviewed in the New York Times and praised on its pages as “a real find.”

Susan’s exuberance lasted but two weeks. In the summer of 2016, the Bolligers’ personal story took a devastating turn when their son, Patrick, died at the age of 21.

Shocked and bereft, Susan was at a crossroads in her life, profession . . . and faith.

“There’s something about suffering,” she says now. “It’s defining.” It’s understandable, she said, how grief and anger can make one turn away from God. 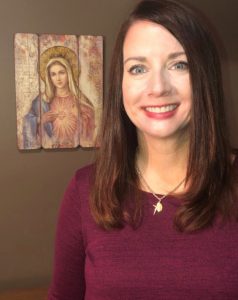 An image of the Blessed Mother above her writing desk reminds Susan Furlong-Bolliger to pray as she works. (Provided photo)

Susan, however, chose to draw nearer to Christ through adoration of the Blessed Sacrament and a more intimate relationship with His Mother.

She used the imagination she has honed since early childhood to put herself with Mary at the foot of Jesus’ cross.

“Since I lost a son, that would be a natural connection,” she explained. “I thought perhaps Mary could understand. It helped me not to feel so isolated. I could console her, and she could console me.”

The mysteries of the rosary have become a part of the daily life of the mystery writer. Susan consecrated her life to Mary after attending a series of classes at The High School of Saint Thomas More in Champaign – where Patrick and daughters Quinn and Regan have attended, as will daughter Fiona next year. Seeking ways to share her faith, Susan registered with Marian societies including the Association of Mary, Queen of All Hearts, and the Militia of the Immaculata. She also made a Cursillo retreat.

Feeling drawn to prison ministry, Susan began writing “faith letters” to incarcerated men and women through a program overseen by the Militia of the Immaculata at Marytown. She still pens one or two letters a week. The program maintains anonymity, but Susan says the written exchanges can lead to a degree of rapport between the prisoner and the faith letter author as progress is made. It can be difficult for both when the inmate gains release and the contact is necessarily broken.

“Many of these men are very well formed,” she told The Post. “They read Scripture continuously. I think they have formed me more than vice versa, because they challenge me.”

In addition, through Cursillo’s prison ministry she has been trained to visit the Danville Correctional Facility and be part of teams that conduct weekend Bible studies, monthly Ultreyas, and yearly retreats.

Professionally, Patrick’s death changed Susan’s approach to writing. She channeled her raw emotions into the Bone Gap Travellers series, which concludes with the release of “Shattered Justice” in paperback this November.

“It seemed like all I did was go to Mass and write the first couple of years after he died,” she said. “I wrote the three books very quickly in succession.”

Susan is grateful for the support of family, friends and her entire church family during that difficult time.

“What a great thing to have a church family when you have something happen,” she said, adding “and we all do.”