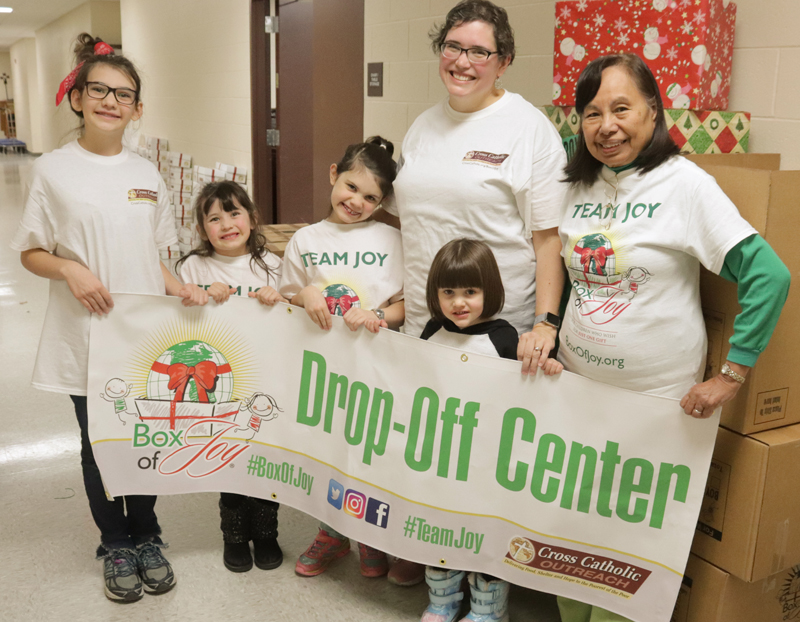 One of Nympha White's favorite projects has been Box of Joy, a mnistry of Cross Catholic Outreach. This photo was taken as she was packing boxes with items donated for children in need last fall with the help of Laurel Stein of St. Mark Parish in Peoria and her daughters (from left) Anna, Clare, Elizabeth and Maggie. White is the new director of the Chicago Province of the National Council of Catholic Women. (The Catholic Post/Jennifer Willems)

GRAND RIDGE — For the next two years, the Chicago Province of the National Council of Catholic Women will be in the hands of a woman who is brimming with energy and doesn’t like to waste time.

“Even when I’m watching TV, my hands are busy,” said Nympha White of Grand Ridge, who was installed with the other new province directors during a Zoom call on Aug. 29. Normally the installation would have taken place during the NCCW convention, but that could not be held as planned due to concerns about the COVID-19 pandemic.

In addition to the Diocese of Peoria, the Chicago Province includes the Archdiocese of Chicago and the Dioceses of Belleville, Joliet, Rockford and Springfield. The role of director rotates through the diocesan councils every two years.

“What I like is learning more about my faith and sharing that with others. My joy comes in doing something for others.” — Nympha White, new director of the Chicago Province of the National Council of Catholic Women

White was nominated for the post by senior members of the board of the Peoria Diocesan Council of Catholic Women and approved by Bishop Daniel R. Jenky, CSC. She succeeds Susanne Nelson-Helms of the Archdiocese of Chicago.

Until now she has been a member of the NCCW Service Commission, but White isn’t sure what her next appointment will be yet.

“I told the president, ‘You can put me anywhere there is a need,'” White said during a recent interview with The Catholic Post.

In the meantime, she will be busy learning her new job, which will take her to the conventions of the diocesan councils of Catholic women and the national gathering, as well as three board meetings each year in the nation’s capital. The first order of business is introducing herself to the bishops of Illinois and getting to know the dioceses.

Her motivation is the same now as the day she joined the Peoria Diocesan Council of Catholic Women 18 years ago.

“What I like is learning more about my faith and sharing that with others,” White said. “My joy comes in doing something for others.”

Faith has always been important for White, who grew up in Tago in the Surigao del Sur Province of the Philippines.

Pedro and Cinderella Medrano made certain their four daughters and four sons attended Catholic schools and went to Mass every day, and White made a Cursillo weekend while she was a student at the University of San Carlos in Cebu City. She started to pass on the faith as a religious education teacher even then, something she continued to do after moving to central Illinois as a newlywed in March 1979.

Settling in Grand Ridge with her husband, Don, White has volunteered as a catechist at St. Mary of the Field there and at St. Columba in Ottawa, the parish they now attend. She also served as the bookkeeper for the Grand Ridge parish for 12 years and has sung in the choirs of both parishes, as well as St. Mary’s Cathedral in Peoria.

She became a “professional driver” when her two daughters got involved in a variety of activities at school and remembers spending a lot of time helping out as a room mother and crocheting while she sat in the bleachers at sporting events. White has kept busy during the pandemic, too, by making 80 masks by hand and sharing them with her daughters and their friends in Chicago and Minneapolis, and Bishop Daniel R. Jenky, CSC, and the Franciscan Apostolic Sisters at his residence.

“STARTED FROM THE BOTTOM”

Her desire to help women and families brought White not only to the Peoria Diocesan Council of Catholic Women but to the Bishop’s Commission on Women at the same time. She would serve as secretary and then vice president of the commission for three years. 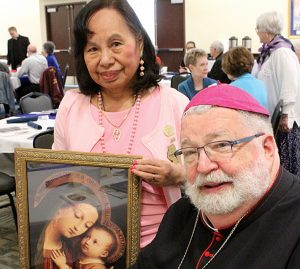 Nympha White holds the Our Lady of Good Counsel Award she received from the National Council of Catholic Women while posing with Bishop Daniel R. Jenky, CSC, (The Catholic Post/Jennifer Willems)

Noting that she “started from the bottom” with the PDCCW, White worked as coordinator for the Ottawa Vicariate before putting her education in business administration and accounting to work as auditor and treasurer for three terms. She was president of the diocesan council for two terms, from 2010 to 2014.

Currently she chairs international concerns and prison ministry for the PDCCW.

For her years of service, White received the Our Lady of Good Counsel Award from the NCCW in 2018. It is the organization’s highest honor.

She remains committed to promoting the sanctity of life and said one of the NCCW’s priorities has been partnering with the U.S. Conference of Catholic Bishops on the “Walking with Moms in Need: A Year of Service.” It began in March and will continue through March 25, 2021. Initiatives on caring for creation and ending gun violence are also important to her.

“I’m praying every day for an end to the virus and violence that’s going on, the riots and looting in the big cities,” White said. “That’s what I’ve been doing morning, afternoon and evening. What can we do?”

She’d also like to see individual and parish affiliate membership in the PDCCW and NCCW grow.

“I’m looking forward to helping other women learn what to do,” White said.