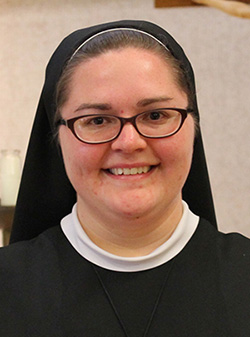 CHAMPAIGN — Sister Mary Francis Goodson, FSGM, a mathematics teacher at The High School of Saint Thomas More in Champaign, has made her final profession of vows with the Sisters of St. Francis of the Martyr St. George. The celebration took place during feast day festivities at the motherhouse in Alton on Aug. 3.

“I am Christ’s forever,” she told The Catholic Post, saying, “The peace and joy is indescribable.”

Sister Mary Francis met the Sisters of St. Francis of the Martyr St. George during her own high school days in St. Louis. She was impressed by the way they were able to make Christ’s merciful love visible, which is the community’s charism. Their joy also made an impression.

Through prayer and discernment, Sister Mary Francis realized that God was calling her to religious life, but she needed more time to respond. She went on to Benedictine College in Atchison, Kansas, where she encountered members of her future community again. She soon knew that she also wanted to make God’s love visible to the world the way they did.

She entered the Franciscan community in September 2010, and received her habit and religious name in 2011. She professed first vows on Aug. 14, 2013.

Sister Mary Francis would eventually return to Benedictine to earn a bachelor’s degree in education, with a double major in secondary education and mathematics. Along the way, she ministered in a house of formation in La Crosse, Wisconsin, helping other young women prepare to enter the convent; worked in the baby room at St. Francis Day Care Center in Alton; spent six months as an assistant cook at the Vatican Embassy in Washington, D.C.; and taught high school for a year.

This is her third year at The High School of Saint Thomas More, where she teaches algebra I and II, pre-calculus and calculus.

“For my honors students, I get to push them really hard,” she said. “For the ones who struggle, it’s a joy to be able to see them get to the point where they can actually love it and enjoy it. . . . It’s a job I love.”