Fr. Otto’s ‘Two Minutes About’ videos are joyfully connecting life, faith for many 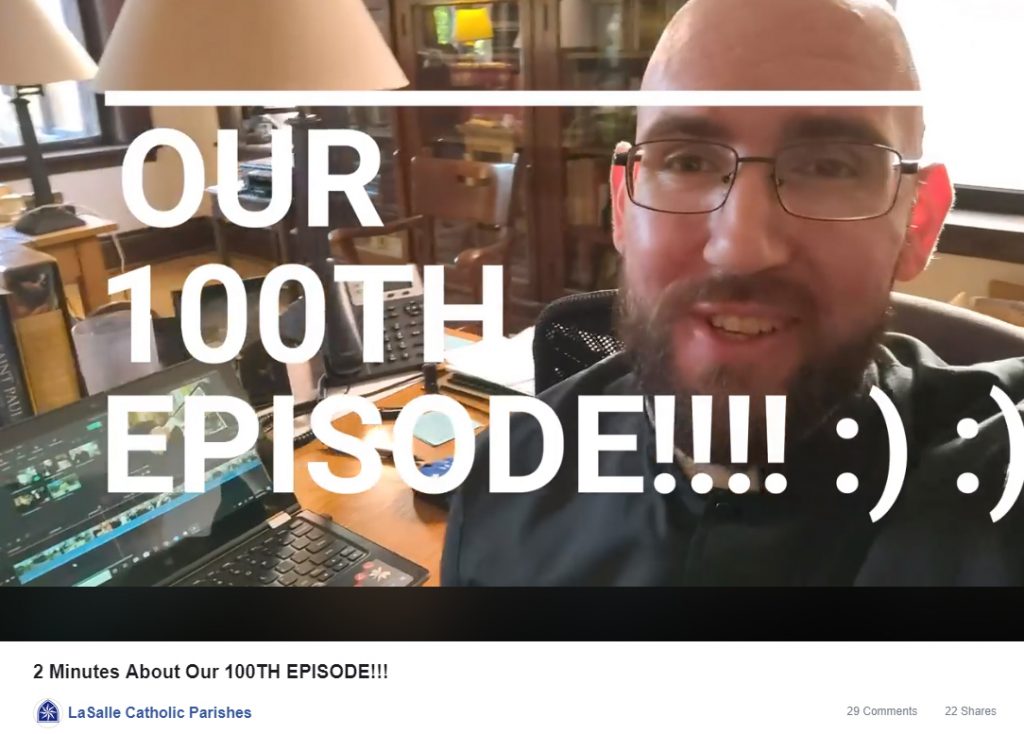 LASALLE — Two minutes doesn’t seem like enough time to accomplish much of anything. For Father Tom Otto, however, it’s more than enough time to make a connection with God and faith and have fun doing it.

Those insights are part of a series on Facebook called “Two Minutes About.” Father Otto, parochial vicar for the LaSalle Catholic Community, started posting the videos on May 1 with the intention of doing it for a month and then evaluating the results.

“The response was so overwhelming. We had over a thousand views on every video and sometimes two or three times that,” he told The Catholic Post. “So we thought, wow, this is really meeting a need.” 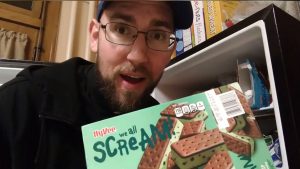 An episode about tiny ice cream bars is among the top five viewed since “Two Minutes About” debuted on May 1.

On Aug. 16, “Two Minutes About” reached 100 episodes and Father Otto doesn’t see an end in sight.

“It’s meant to be a nice break from all the heavy, stressful, anxious things, whether it’s news about the pandemic or all the political election news or all the different debates that happen on social media,” he explained. “This is something that’s lighthearted, that’s funny, that’s inspirational and it’s also really short, so people can watch it.”

The premise is that there are an infinite number of ideas for the posts, since there are countless ways to connect life and faith. The top five episodes have used running, tiny ice cream bars, hammocks, breakfast cereal, and a drive-thru to make a point while making the viewer smile.

“Prayer isn’t just us placing an order, as if (God) doesn’t know us better than we know ourselves,” Father Otto says as he sits at a fast food drive-thru window. “Prayer is us going to him and letting him awaken in us a desire to receive what’s actually good for us.”

As for the tiny ice cream bars, “We should let it be enough. Because at the end of the day, it’s not ice cream sandwiches or it’s not our hobbies or it’s not our stuff . . . that satisfy us. It’s only God,” Father Otto says while scrounging in the rectory freezer.

Recent episodes have focused on a bug that landed on his picnic table and road construction in the LaSalle-Peru area.

The idea for the videos grew out of a conversation between Father Otto and Father Paul Carlson, pastor, along with seminarians Nic Wilson and Francis Strong at the end of April. They were sheltering in place at the LaSalle Catholic Community while they finished their online studies for the spring semester through Mount St. Mary’s Seminary in Emmitsburg, Maryland.

The priests had been livestreaming Masses in the morning and the rosary every afternoon and got a great response from that, so they started thinking about how to engage people in the evening. They wanted it to be short and entertaining.

“I think a lot of it is the Holy Spirit. Whenever we have a daily prayer life — speaking to God — we see analogies for the faith in ordinary things. I think that’s what happens to me.” — Father Tom Otto

“So we had this idea — let’s make a two-minute video each day and try to pick out something that’s not a churchy thing, so to speak. Let’s pick something normal from normal life, but find the lesson, find the analogy, find the connection to the faith in that,” Father Otto said.

The seminarians continued to help, making their own “Two Minutes About” episodes now and then. Father Otto gave credit to Deacon Wilson for teaching him how to edit the videos, which are filmed on cellphones, and add graphics and type. What once took two hours to produce can now be done in less than half an hour.

When May came and went the group still had ideas so they kept going. When the seminarians left for their summer assignments, another seminarian, Jonathan Robinson, arrived to work with the priests through June and July and got involved.

When the 100th episode was approaching, Father Otto thought about taking a break. He already had two or three other videos filmed, however, and four or five more ideas.

“For me it’s fun,” he said. “It’s a way for me to exercise my creative side in a way that I hadn’t before.”

He said he keeps a notebook for ideas, but most of them come to him on the fly.

“I think a lot of it is the Holy Spirit. Whenever we have a daily prayer life — speaking to God — we see analogies for the faith in ordinary things. I think that’s what happens to me,” Father Otto said.

Seeing the hunger people have for the faith, especially in uncertain and fearful times with the pandemic, has been encouraging for him, too. Father Otto is also grateful for the way the videos have found their way into the newsfeed of people he hasn’t heard from in years and are helping them to reconnect to the faith as well as their friendship as a result.

“When we don’t focus on the problem or the discouragement, but let God empower us to be creative in a positive way, that has big effects,” he said.

To find “Two Minutes About,” follow LaSalle Catholic Parishes on Facebook. The videos are also available at lasallecatholic.org.