College life has changed in 2020, but not the mission of Catholic campus ministry 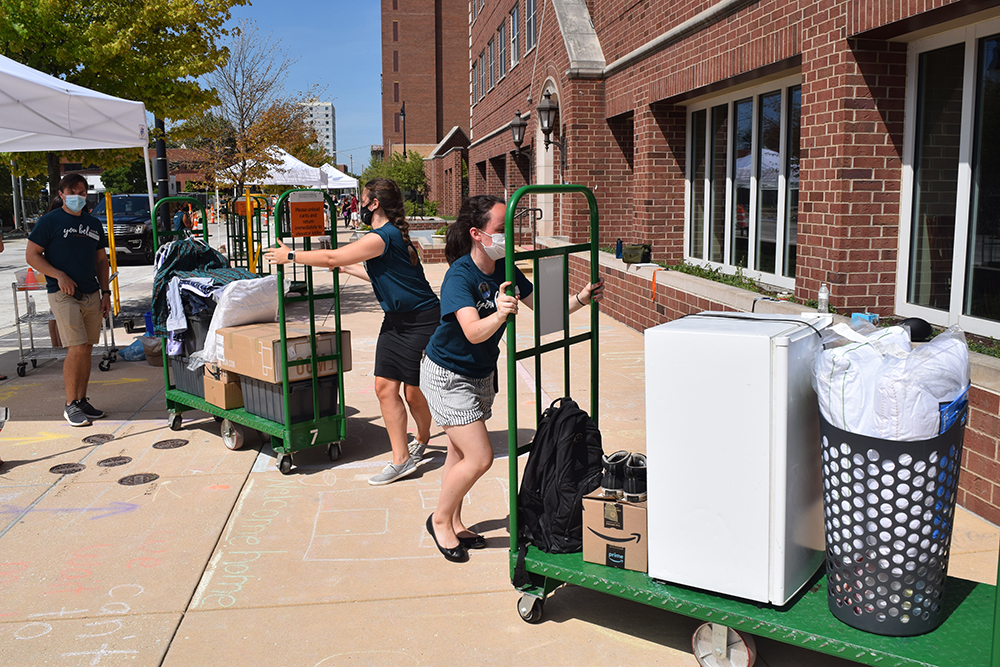 Volunteers from St. John's Catholic Newman Center help returning students move in to Newman Hall in the heart of the University of Illinois campus in Champaign on Aug. 17. (The Catholic Post/Tom Dermody)

While students returning to the many universities and colleges within the Diocese of Peoria are facing new realities because of the pandemic, the mission of the Newman Centers and other Catholic campus ministries has not changed. 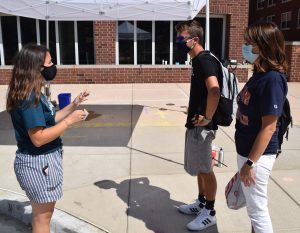 Lourdes Garcia, a resident advisor, welcomes Carter Sauder and his mother, Jill, to Newman Hall during a move-in day Aug. 17 at the University of Illinois. The Sauders are from Roanoke, and Carter is rooming with Jack Weber, also from Roanoke. (The Catholic Post/Tom Dermody)

“Our official mission is to lead college students to a lifelong encounter with Christ and His Church,” continued Father Lampitt as volunteers helped students move in to Newman Hall in the heart of the University of Illinois campus on Aug. 17. “Maybe the way we do it is a little different with social distancing and face masks, limits on gatherings, but the mission doesn’t change.”

The fact that St. John’s Catholic Newman Center operates a residence hall with dining facilities has made preparations for the return of students this fall even more complicated. Newman Hall is making use of additional spaces for dining, including outdoor seating, so that tables for three or four can be adequately spaced. While traditionally the dining hall is open to the public, this fall it is for residents or employees only and won’t be the usual self-serve.

“There’s no playbook for this,” said Father Lampitt, who said he has been in touch with other Newman Centers throughout the U.S. as well as university and local health authorities for guidance.

Father Lampitt recalled a theme that Father Chase Hilgenbrinck, assistant chaplain at the Newman Center, used in a recent reflection to staff in which he advocated for “prudence over fear.”

“It’s real easy to be motivated by fear,” said Father Lampitt. “But fear is not a virtue. Prudence is.” He described the “tightrope” of balancing safety while also giving students “as normal of an experience as possible.” 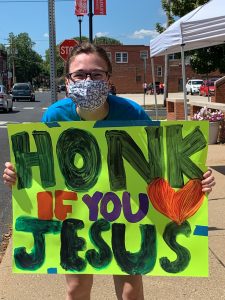 “This pandemic is not a surprise to God,” continued Father Lampitt. “God can work within its parameters, overcome its limitations and barriers. So it’s just a moment to put our faith into practice and believe the Lord can change lives.”

Among the limits St. John’s Catholic Newman Center will cope with include a capacity of about 150 in St. John’s Chapel for Mass instead of the usual 1,000, smaller teams and shorter lengths for its Koinonia retreats, and a lot of uncertainty.

“Normally this time of year everything is planned out and we know exactly what we’re doing and when we’re doing it,” he told The Catholic Post. “We’ve been forced to focus on a week or two at a time because things change or you have to await on someone else’s approval or guidelines.”

Meanwhile, at Bradley University in Peoria, St. Joseph Newman Center campus minister Erin Mone is witnessing a lot of creativity and enthusiasm on its student team.

“The students have so many ideas, it’s really cool,” she told The Catholic Post on Saturday, also a move-in day. “We can’t have large group gatherings, but we can do small things.” 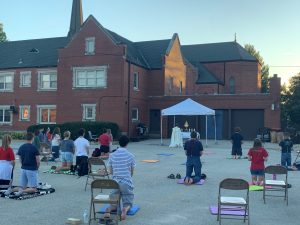 Led by Msgr. Brian Brownsey, chaplain/director, student leaders and staff from St. Joseph Catholic Newman Center at Bradley University pray for the coming semester during outdoor adoration at a retreat prior to the return of students. (Provided photo)

For example, instead of the usual large welcoming crowd handing out water bottles as parents and students passed the center and St. Mark Church on their way to campus, last weekend a smaller crowd held signs saying “Honk if you love Jesus” or “Shout out a prayer request.” Other students went around campus two-by-two to welcome students individually and tell them about Newman activities, while about a dozen students assisted the university in dorms, sanitizing carts and helping as needed.

Masses will be moved from the cozy Newman Center chapel to the larger St. Mark Church. The post-Mass Sunday Social will take place outside or in the neighboring St. Mark School gym.

The Newman Center leadership team prayed for the coming semester during a recent retreat, including during adoration of the Blessed Sacrament on the outdoor parking lot. Outdoor adoration also took place on Monday, with Newman students joined by children from St. Mark School.

“The students are all very excited to be back,” said Mone, “but also very cautious it might not be for that long. You still see the fire they have to go reach people for Jesus.”