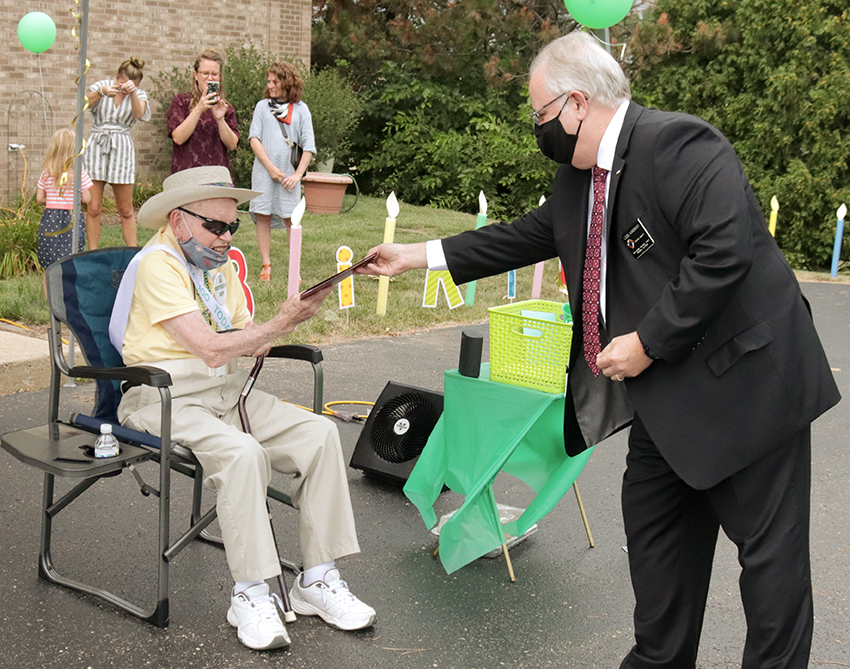 Louis Kanowsky, grand knight of Spalding Council No. 427 of the Knights of Columbus, presents a resolution passed at the state convention to Michael Faley that honors him for being a member of the fraternal organization for 77 years. The council named a meeting room in the Knights of Columbus Hall in Peoria for Mr. Faley, who turns 100 on Sept. 4. (The Catholic Post/Jennifer Willems)

Michael Faley says there are three secrets to a long life: keep all your doctor’s appointments, get plenty of rest, and try not to worry too much.

It must work. The Peoria man will celebrate his 100th birthday on Sept. 4.

“One hundred years is just a number,” Mr. Faley said with a smile. 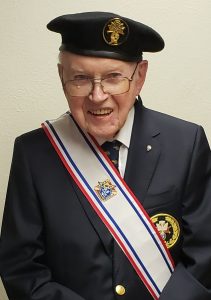 Michael Faley has long taken part in the honor guard for the bishop at St. Mary’s Cathedral in Peoria. (Provided photo)

Pandemic restrictions made a large birthday party tricky, so his extended family invited well-wishers on Aug. 15 to drive through the parking lot of the Knights of Columbus Hall on Radnor Road in Peoria to wave, drop off cards and balloons, and offer other tributes. Among them were 100 oversized birthday candles fashioned from foam pool noodles — a gift made possible by a $500 donation from his Silver Sneakers exercise group at the RiverPlex to St. Jude Children’s Research Hospital.

In addition to the decorations that encircled the parking lot, the group provided noisemakers in the form of honking horns as their car caravan drove past the soon-to-be centenarian.

A veteran of World War II, Mr. Faley also received a salute from an honor guard from American Legion Post 2.

“By your service, you’ve given testament to your loyalty to this country and your own great courage,” said eulogist Bruce Stewart. “We ask that you accept these few words as grateful acknowledgement and appreciation for your help in preserving our freedom.”

Perhaps the most meaningful tribute came from the Illinois State Council of the Knights of Columbus, which passed a resolution at the virtual convention in April to recognize him for his 77 years as a member of the fraternal organization. It was presented to Mr. Faley by Louis Kanowsky, grand knight of Spalding Council No. 427.

He praised Mr. Faley, the longest serving member of the council, for taking part in the honor guard for the bishop at St. Mary’s Cathedral in Peoria as many as 40 times a year, until breaking a hip in February.

“It shows you can be active your whole life,” Kanowsky told The Catholic Post. “We’d love to have a lot more young members, but I think we can look to the members like this who have done so much and see if we can live up to their legacy.”

“I KNEW I HAD TO KEEP BUSY”

That dedication to faith, family and service started on Sept. 20, 1920, in Ohio, Illinois, for the only son of Mike and Bridget (Brida) Faley. They were members of Immaculate Conception Church there, but there was no Catholic school so Mr. Faley attended a one-room country school and then Ohio High School. 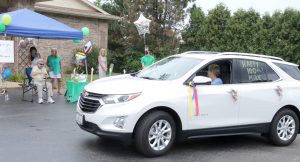 Lana Miller, part of the Silver Sneakers exercise group at the RiverPlex in Peoria, offer birthday greetings to member Michael Faley during a drive-thru celebration on Aug. 15. (The Catholic Post/Jennifer Willems)

While he was studying commercial and physical education at Western Illinois University in Macomb, he signed up for the Army Reserves. The recruiter promised he would be able to graduate before being called into active service, but it didn’t work out that way.

“It was in March of my senior year when we were called to active duty. So I had to go back and finish my degree after I was discharged,” he said.

During his time in the Army, he served as a medic the day after the troops landed on Omaha Beach in France. He worked as a clerk at the 51st Field Hospital of the 1st Army, preparing reports on the treatment the soldiers received before and after surgery.

After earning his degree, Mr. Faley decided to go into industry rather than teaching. He did office work for nearly 36 years at Caterpillar, RG LeTourneau and finally TP & W Railroad, earning enough to send his five sons and two daughters to St. Bernard School and then Bergan High School and Academy of Our Lady/Spalding Institute, all in Peoria.

He threw himself into volunteer work, spending the next 32 years in transport at OSF Saint Francis Medical Center in Peoria. This brought him the Senior Corps Governor’s Volunteer Service Award in 2012. He was also active in the American Legion, VFW, and St. Patrick’s Society, where he volunteered for the Erin Feis celebration in downtown Peoria for many years.

As a young man new to Peoria, Mr. Faley said he found the Knights of Columbus to be a good way to get out and meet people.

“I went to one barbecue and asked this girl to dance and we danced for 54 years,” he said of his wife, Marie, now deceased.

Married in 1948, they shared a strong Catholic faith and were active members at St. Bernard Parish in Peoria. Not only did he take on many painting and maintenance projects there, but he served as president of the Men’s Club, Cub Scout leader, lector and “fish dipper” for countless fish frys.

Mr. Faley helped with fish frys and other activities for the Knights of Columbus, too. He shied away from becoming grand knight, however, so he could spend more time with his family. That didn’t stop the Spalding Council from honoring him at its annual Night of Knights celebration in 2013. 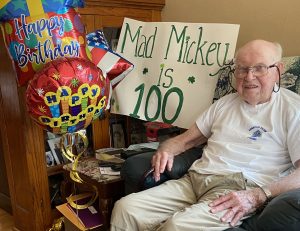 Sitting in the living room of his son’s Peoria home, Michael Faley continues to bask in the glow of the birthday drive-thru celebration held Aug. 15. He will be 100 years old on Sept. 4. (The Catholic Post/Jennifer Willems)

“He’s a guy who, even though he was 60-plus when I was in high school, always had time to play catch and go to my games,” said youngest son Kevin Faley of Park Ridge. “He always had a sparkle in his eyes, even throughout the years when he had various ailments. It brightens up your day when you talk to him.”

“Ever since I’ve known him, he’s gone to Mass every day, received Jesus, received the Eucharist,” she said. “I think having that as the cornerstone of your life has given him the energy and the mentality to stay strong and want to be involved and continue to give of himself throughout his life.”

She added that it’s inspiring to see that no matter what your age, you still need Jesus. “I love that,” she said.

Mr. Faley lived in his own home until a fall that required surgery earlier this year. He lives with his son Michael and daughter-in-law Molly Faley now as he recuperates and faces a few more health issues. He’s determined to walk again without a cane and wants to return to being part of the honor guard for Bishop Daniel R. Jenky, CSC.

EDITOR’S NOTE: Those wishing to send cards or well-wishes to Mr. Faley may do so at this address: Michael Faley Sr., 2221 W Alice Ave., West Peoria, IL 61604