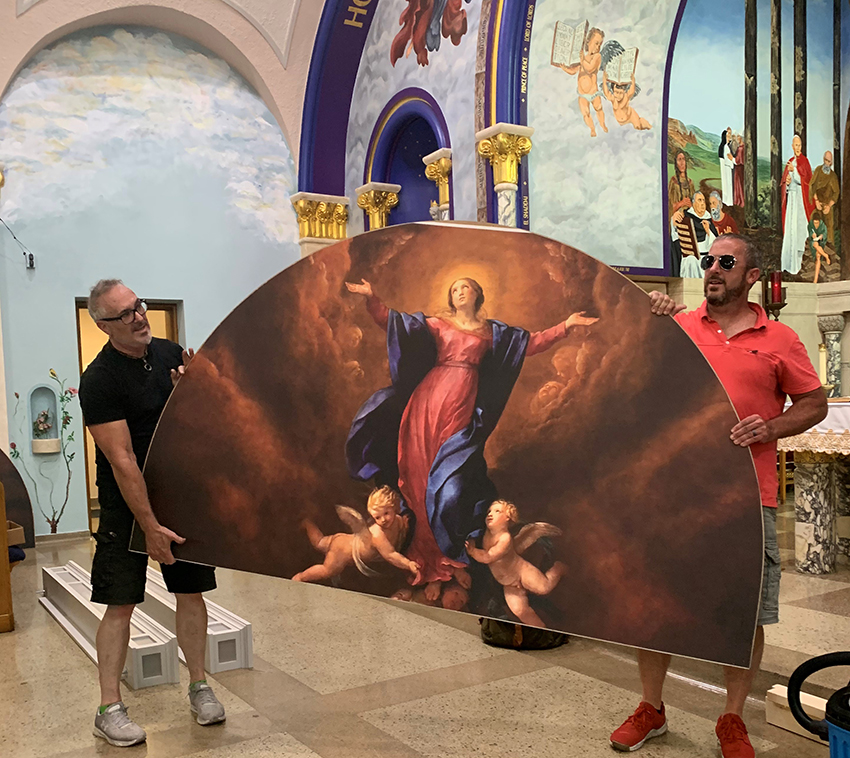 Kenosha artist Stephen Cascio, left, and his brother Patrick carry an image of the Assumption of Mary prior to its installation above an entrance to St. Mary Church in Westville. It was one of two Marian depictions installed and blessed on the Solemnity of the Assumption, Aug. 15. (Provided photo)

WESTVILLE — Two digitally reproduced Baroque-era paintings of the Blessed Virgin Mary were installed and blessed in interior arches above the north and south entrances to St. Mary Church here the weekend of Aug. 15-16.

“Our parish is named St. Mary and, other than a statue, we really had nothing special to the Blessed Virgin Mary,” said Father Timothy Sauppé, pastor  here since 2008.

That changed on Saturday, Aug. 15 — the Solemnity of the Assumption — when artist Stephen Cascio and his brother Patrick installed a depiction of Mary’s bodily entrance into heaven inside one of the two archways prior to the 4 p.m. weekend Mass. 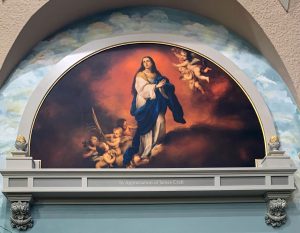 A digitally printed reproduction of “The Immaculate Conception” by Bartolomé Murillo is shown above an entrance to St. Mary’s Church in Westville. (Provided photo)

The second piece, an image of Mary’s Immaculate Conception, was installed following that Mass. Both were blessed and explained at all liturgies that weekend by Father Sauppé, who noted that this year is the 70th anniversary of the defining of the Assumption as a dogma of faith by Pope Pius XII.

“For 12 years I’ve been looking at those spaces and thinking, ‘We ought to put something in there,” said Father Sauppé.

In late spring, Father Sauppé invited Stephen Cascio — an independent artistic design director and consultant from Kenosha, Wisconsin — to Westville. Father Sauppé had admired Cascio’s work on Stations of the Cross and murals at the Kenosha church where his friend, Father Dwight Campbell, is pastor.

Cascio suggested replications of Marian paintings by two 17th-century artists: “Assumption of Mary” by Guido Reni (1637) and “The Immaculate Conception” by Bartolome Estaban Murillo (1678). Beneath each painting is a mantel with a dedication acknowledging financial supporters: “A gift from Regina and John E. Sabalaskey” with the Assumption depiction and “In Appreciation of James Craft” with the Immaculate Conception rendering.

“Everybody’s raving about them,” said Father Sauppé of the reproduced paintings, which are mounted on 3/4-inch, high quality plywood.

Among the admirers is Barbara Allison, a member of Holy Family Parish in Danville who contributed to the project by painting a soft blue and white cloud scene on the walls to serve as a backdrop to the paintings.

“They’re beautiful,” said Allison of Cascio’s reproductions. Allison told The Catholic Post that among her other artistic experiences is the repair of broken statues.