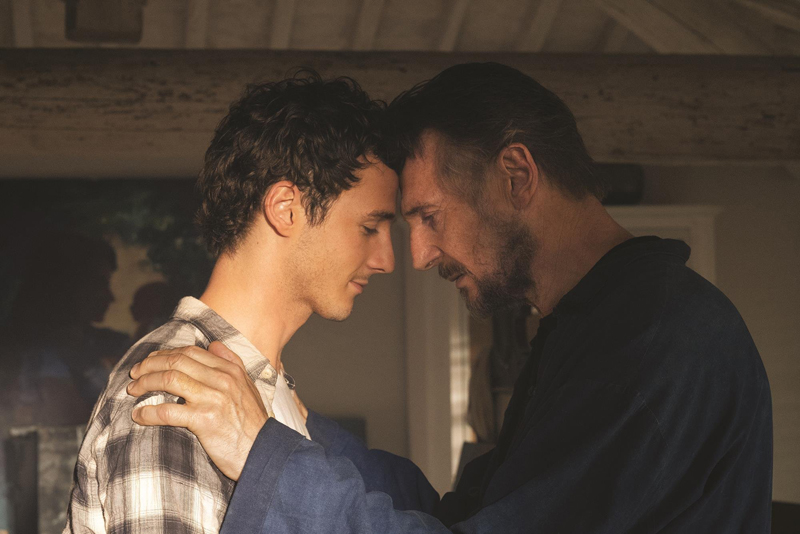 Micheál Richardson and Liam Neeson star in a scene from the movie "Made in Italy." The Catholic News Service classification is A-III -- adults. (CNS/IFC)

Real-life father and son Liam Neeson and Micheal Richardson team up to play a fictional parent-grown-child duo in this blend of comedy, drama and romance, written and directed by James D’Arcy.

Faced with being fired from his job as an art gallery manager by the establishment’s owners, the family of his soon-to-be ex-wife (Yolanda Kettle), Richardson’s character turns to his semi-estranged dad, a once-famous painter, to help him fix up and sell the house in Italy they jointly inherited from his long-dead mother so he will have the money to buy his workplace. Together they travel from their home base of London to Tuscany, where unresolved grief haunts both even as the lad falls for a divorced local restaurateur (Valeria Bilello). The vineyard-laden landscapes are easy on the eyes and some of the comedy involved in repairing the disastrously neglected vacation home is gently amusing.

But, although the divide created by bereavement is plausible enough, once D’Arcy’s script pushes matters to a crisis, the emotions begin to feel forced. The celebration of second love and, possibly, marriage will not sit well with viewers committed to the lifelong permanence of that honorable estate, and the screenplay could have gone lighter on vulgar language. But the theme of family unity and a cheerful spirit help to compensate.

Acceptability of divorce, implied casual sex, fleeting sexual humor, at least one use of profanity, a couple of milder oaths, about a dozen rough and half as many crude terms. The Catholic News Service classification is A-III — adults. The Motion Picture Association rating is R — restricted. Under 17 requires accompanying parent or adult guardian.