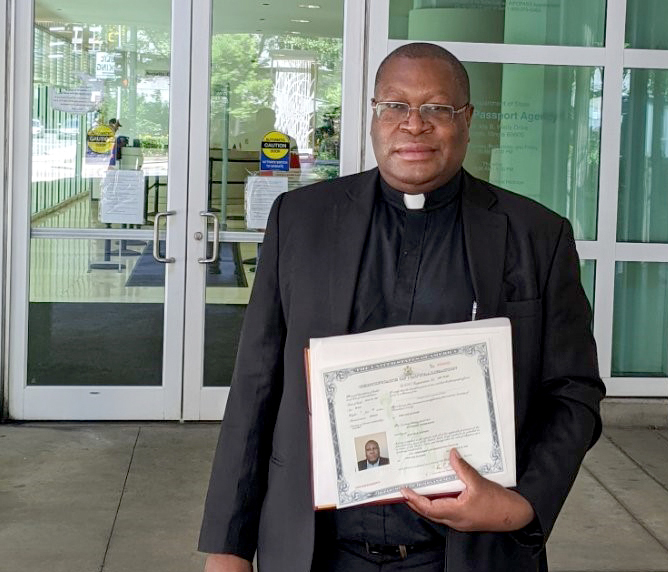 Standing outside the Chicago office for U.S. Citizenship and Immigration Services, Father Deusdedit Byomuhangi displays his certificate of naturalization on July 13. (Provided photo)

DANVILLE — As he studied for the civics test he would have to take to become a U.S. citizen, Father Deusdedit Byomuhangi found he had something in common with the colonists in his adopted country.

“I like and appreciate that the colonists wanted and fought for the freedom and the liberty that exists and that can be enjoyed in this great nation,” said Father Deus, chaplain at OSF HealthCare Sacred Heart Medical Center in Danville since 2013. “They are the same reasons why I also became a citizen.”

Father Deus got his wish on July 13 when he took the Oath of Allegiance at a naturalization ceremony in Chicago. An open house was held in his honor on July 24 in the parish hall of St. Mary in Westville.

Born in Uganda, Father Deus came to the Diocese of Peoria in 2013 to serve as a chaplain at United Samaritans Medical Center in Danville. The hospital became part of OSF HealthCare in 2018.

“It feels great to be a citizen of the greatest nation on earth,” he recently told The Catholic Post by email. “This means a lot for and to me.”

Born in Kabale, Uganda, in East Africa, Father Deus said the president there, Yoweri Museveni, has ruled since 1986. He has been able to remain in office so long because he won’t give up power in a fair and democratic way, he explained.

“Uganda needs lots of prayers because nearly everything is going in the wrong direction,” according to Father Deus.

He credits his late uncle, Father Lazarus Kabashariira, for his vocation to the priesthood.

“I recall as soon as I reached the age of reason I began to admire this great uncle of mine until I resolved that I wanted to be like him when I grew older and that is what happened,” Father Deus said. “He also wanted and encouraged me to follow in his footsteps.”

His home diocese is the Diocese of Kabale in Uganda and he attended St. Adrian’s Minor Seminary, Rubanda, and St. Paul’s Seminary, Rushorooza, for initial studies. At St. Thomas Aquinas Major Seminary, Katigondo, he earned a bachelor’s degree in philosophy and a diploma in religious studies affiliated with Urbaniana University in Rome.

Father Deus came to the Diocese of Peoria on Dec. 10, 2013, to serve as a chaplain at United Samaritans Medical Center in Danville. The hospital became part of OSF HealthCare in 2018.

“OSF is my other family,” he said. “I have always felt as an adopted child of the hospital where I work. The way I came and the way I have stayed here qualifies me to continue referring to myself this way.”

As the manager of the pastoral care department at OSF Sacred Heart Medical Center, he oversees and endeavors to provide for all the spiritual needs of the patients, their families and friends, as well his fellow “mission partners,” with the greatest care and love.

“It is a humbling experience to see how people trust me with their soul(s) and especially when they are in the most vulnerable moments of their lives,” Father Deus said. “My ministry is like what one great author called and referred to as being a wounded healer. I am a wounded healer and it is amazing to see how these people love and trust me in my own ‘woundedness.’”

Father Deus said he wanted to become a citizen of the United States ever since he arrived here. The greatness of the nation is manifested through her people, her freedom and the economic development that can’t be missed, he explained.

Most of all, however, he felt loved.

“There has not been anyplace I have been where I have not felt loved,” he told The Post.

Father Deus applied for and was granted a permanent resident card (green card) in 2013 and began the process of becoming a citizen in February 2019. That included preparing to answer 100 civics questions as part of the naturalization test.

The interviewer may ask up to 10 questions and the applicant must answer six of them correctly.

Now that this is all behind him, Father Deus will have many more opportunities to preside at Mass for the people he serves, especially those who may not have it if he weren’t there. He also looks forward to sharing lunches and hikes with the priests of the Danville Vicariate.

“On some occasions, we priests of African descent who are working in the Peoria Diocese have found some occasions where get together and share untold joys,” he said.