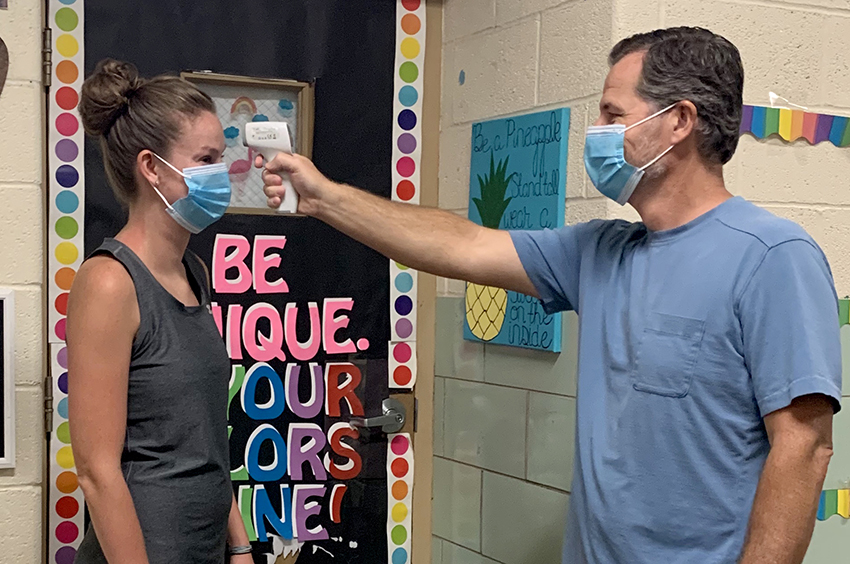 David Welch, principal at Carroll Catholic in Lincoln, takes the temperature of kindergarten teacher Emily Lund. This scene will become familiar for students and faculty at the 42 Catholic schools around the Diocese of Peoria as in-person instruction begins in August. (Provided photo)

EDITOR’S NOTE: This is the first in a three-part series on how the 42 schools of the Diocese of Peoria are planning to reopen for the new academic year.

Noting that children learn best through face-to-face instruction, Dr. Sharon Weiss said Bishop Daniel R. Jenky, CSC, and Coadjutor Bishop Louis Tylka have given permission for the 42 Catholic schools in the Diocese of Peoria to reopen for the 2020-2021 academic year.

The superintendent of Catholic schools for the Diocese of Peoria, Weiss sent out the Office of Catholic Schools’ Diocesan Plan to school pastors, principals and chaplains on Friday, July 24. It includes information on health and safety requirements, finance and communications. 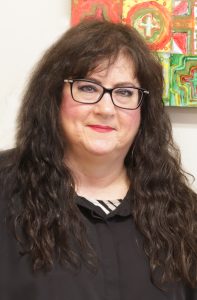 “The thing to remember is we’re not going to operate like we used to. It’s just not a normal back-to-school start.” — Dr. Sharon Weiss, superintendent of Catholic schools, Diocese of Peoria

Families who would prefer to have their students enrolled in online learning rather than return to in-person classroom instruction may do so through a “virtual academy” provision. Either way, students will be expected to attend five days a week.

The plan was written with the guidance of medical professionals in Peoria and the Bloomington-Normal areas, the other five superintendents of Catholic schools in Illinois, the principals of the Diocese of Peoria, and diocesan officials, such as the vicar general, and the chancellor and diocesan attorney.

Weiss said they also consulted guidelines set forth by the Illinois Department of Public Health, the Illinois State Board of Education, and the Centers for Disease Control and Prevention.

“The thing to remember is we’re not going to operate like we used to,” said Weiss. “It’s just not a normal back-to-school start.”

That means masks will be worn when students arrive at school in the morning and leave in the afternoon, when they’re in the hallways and bathrooms, and in common areas. Masks will be required in the classrooms, too.

“It’s just going to be the way schools are going to open,” Weiss told The Catholic Post.

Faculty and staff will monitor their own temperature throughout the day. Schools are asked to perform “wellness checks” of all students as they arrive.

“That’s what happens now,” Weiss said, noting that this is standard procedure to visit the dentist or doctor, too. “We’ve been doing that all summer. It shouldn’t be anything new for the kids.” 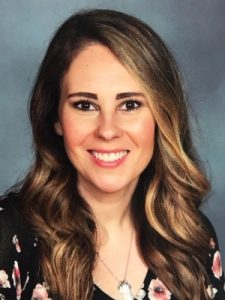 “Two classes will go (to Mass) at a time, and whoever does not go that week will be in their homerooms watching it through livestreaming.” — Emily Blumenshine, principal, St. Michael the Archangel School, Streator

What will look different is that parents won’t be able to walk their children to their classes for first-day photos, said Emily Blumenshine, principal at St. Michael the Archangel School in Streator. A drop-off line will be formed, with parents driving up to the entrance and then moving on.

“Kids are resilient, but they’re going to have to adjust,” Blumenshine said, adding that she hopes their desire to be back in school with their friends and teachers will help to smooth over any rough patches.

To help with social distancing, the Streator school has eliminated the use of tables, opting instead for desks that face the same direction. For the time being, extra furniture has been removed as have reading nooks.

Enrollment has been closed to keep the classes small and children will remain with their classes as much as possible. Blumenshine said that’s fairly normal for the younger grades — preschool through third grade. The change will come for the older students — grades four through eight — where the teachers will rotate.

Instead of two lunch periods, they’re looking at four with no more than 50 children in the cafeteria at any one time. As with the classrooms, everyone will have assigned seats and remain with their class or “cohort” as much as possible, she said.

In addition to instruction, technology will be used to keep the school community connected for Mass each week, according to Blumenshine.

“Two classes will go at a time, and whoever does not go that week will be in their homerooms watching it through livestreaming,” she said. “I will bring Communion to the school.”

Carroll Catholic in Lincoln, built in the 1960s, has large classrooms that will give students a chance to spread out, said David Welch, principal. They also have removed extra furniture and bookcases to provide even more room for social distancing.

He said students and visitors will use different entrances, although visitors are being asked not to come to the school for now if they don’t have to.

While Logan County has not been affected as much by COVID-19, Welch said they are still keeping health and safety in the forefront. In addition to wearing masks, students will be encouraged to wash their hands often and extra cleaning is planned to mitigate the risk as much as possible.

As for playground use, Carroll Catholic has a “decent-sized campus” behind the school that will allow for four distinct areas for students to use, Welch said.

“It’s going to be different, there’s no doubt about it,” said Weiss, who commended the school communities.

“They did an exceptional job. I was very, very pleased with the thought that had gone into these plans,” she said. “The questions that we had asked be answered in their plans, they did.”

Weiss said her prayer is that once the students return to the classrooms and the teachers do what they do best, such as teaching and share the faith, that the school year will be off to a good start.

NEXT ISSUE: How high schools are planning to come back and a look at an innovative approach in the Quad Cities.