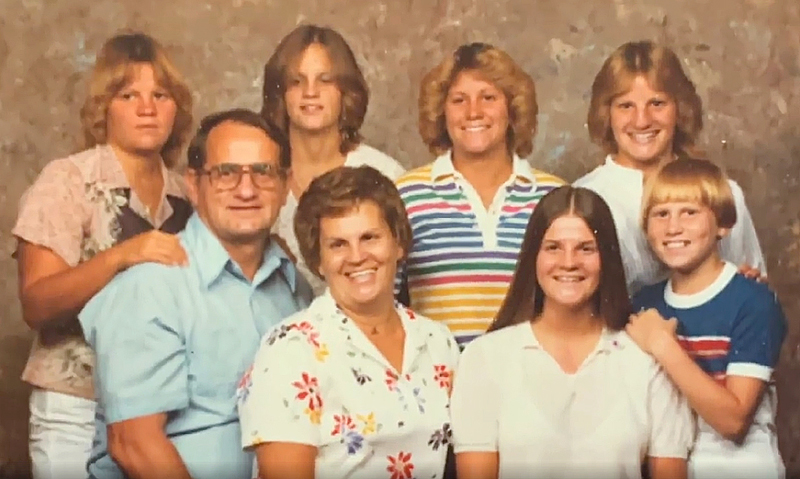 Long before being a priest — let alone a bishop — was a thought in his mind, Coadjutor Bishop-elect Louis Tylka was playing church with his five older sisters, Linda, Brenda, Therese, Patty and Mary Lou, in the garage of their Hazel Crest home.

The “host” was fashioned from Wonder Bread and they used a board for the “altar.” Even then, he was giving homilies.

“He was always storytelling,” said his father, Louis M. Tylka, during a recent family interview with The Catholic Post.

While it was a few more years before the priesthood was something he would pursue in earnest, no one was surprised when Bishop-elect Tylka told them he had been appointed to the Diocese of Peoria and would succeed Bishop Daniel R. Jenky, CSC, upon his retirement.

“I was ecstatic,” said Brenda Landau, who is called BJ by her brother and sisters. “I didn’t think it was incredible. I know he’s young, but I know who he is. I think he’s absolutely qualified for the job and whatever he needs to do to get good at it, he will do.”

She added that the Diocese of Peoria is lucky to have him.

“You won the Lotto,” she said.

Even with an 11-year age difference between Bishop-elect Tylka and his oldest sister, Linda, he fit right in, Landau said. 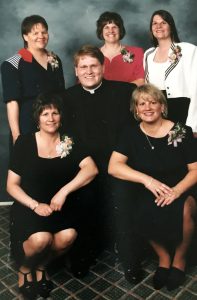 “There was five of us and then there was six of us,” she said during a phone interview from her home in New Jersey. “There were obviously five girls and then a boy, but he folded right in.”

What made him stand out, she said, was his red hair, bright blue eyes and “all those freckles.”

“He was just an adorable kid,” Landau said. “I don’t remember him being fussy or difficult. He was sweet.”

But was he spoiled, having five older sisters?

“Yes,” said Linda Tylka of Albuquerque, New Mexico; Therese (Tésa) Dunning of the Chicago area; and Patty Arvia of San Diego, California, who were part of the interview at the Spalding Pastoral Center in Peoria.

To which Bishop-elect Tylka responded, “Deservedly so.”

Laughter followed, as it often does for this close-knit family.

That bond developed early in their family, according to Landau, and until recently included youngest sister Mary Lou Bryant. She succumbed to cancer last month.

“My parents raised us so nobody felt like they were special or not special. They didn’t play favorites,” Landau told The Post. “So we got along pretty well as kids.”

Louis and Norma Tylka also encouraged each of their children to be their own person.

“I think that’s ingrained in all of us — to be ourselves, who we are, but we had to work together as a unit, as a family,” Landau said.

That was especially important on Sunday mornings as they were trying to get out the door for Mass at St. Joseph Church in Homewood, she recalled.

“The family station wagon, as you can imagine, was packed to the gills,” Landau said. “Somehow we all got in that car. . . . I can picture us walking in. We probably looked all put together when half an hour earlier, Dad was honking the horn and trying to get the last one out of the bathroom.”

Family was also an important part of the equation for holy days, especially Christmas and Easter. And it wasn’t just immediate family, Landau said. 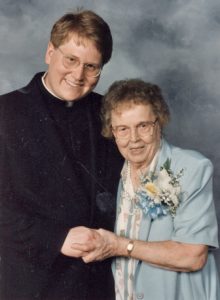 Father Louis Tylka shares a special moment with his maternal grandmother, Catherine Smith, after being ordained to the priesthood for the Archdiocese of Chicago. (Tylka family photo)

“At that time it was a very large, extended family. My dad was one of 10 kids and my mom was one of four, so we had plenty of cousins, aunts and uncles,” she said. “For me, that’s intricately woven in. When you talk about the faith foundation it’s all part of having a strong family. And we had fun as a family, so it was good times when we were together.”

When the Tylka family lived in Harvey, they attended Ascension-St. Susanna Church and the girls went to the parish school. “You name it, we were at church,” said Arvia, the fourth of the five sisters.

And since there weren’t gym teachers in Catholic schools at that time, Mrs. Tylka would bring in records and take those classes herself.

After they moved to Hazel Crest, the girls went to public schools and Bishop-elect Tylka was sent to St. Joseph School in Homewood, where he was also an altar server. He would go on to Marian Catholic High School in Chicago Heights.

He wasn’t involved in extracurricular activities as first.

“My mom went back to work when I was in fourth grade and both mom and dad worked nights, so it was a chore just to get to and from school,” Bishop-elect Tylka said.

During his sophomore year, Mrs. Tylka asked him to join the Teen Club and by his senior year he was involved in starting the Kairos retreat program. There have now been more than 200 Kairos retreats at Marian Catholic.

The priest who helped with the retreat was Father Dan Danowski, the associate pastor at the Homewood parish. Afterward he asked Bishop-elect Tylka if had ever thought about being a priest.

“I told him he was crazy. I was already headed to Purdue at that point,” Bishop-elect Tylka said. “I had no clue what I was going to do. But he had asked the question and it kept coming back over and over again.”

SOMETHING BIGGER THAN HIMSELF

“I think maybe his only inclination was that he wanted to do something to help people,” Landau said. “I think his innate interest was to do something bigger than himself.”

Bishop-elect Tylka went to Purdue in West Lafayette, Indiana, for one semester, but transferred to Purdue Calumet in Hammond when his mother was diagnosed with cancer.

“At the same time I kept thinking about the priest question,” he said. “I thought, ‘If I’m going to be a priest, Purdue’s not helping me.’ That’s when I transferred to Niles College Seminary.”

Mrs. Tylka had a chance to visit the seminary and say, “This is where my son belongs,” before she died a few weeks later.

He would go on to the University of Saint Mary of the Lake,Mundelein Seminary and be ordained a priest for the Archdiocese of Chicago by Cardinal Joseph Bernardin on May 18, 1996.

Landau said she could see the reliance on his faith growing stronger as Bishop-elect Tylka went through their mother’s illness and his priestly formation.

Linda Tylka, Tésa Dunning and Patty Arvia said it didn’t surprise them when their brother said he was discerning the priesthood, although Patty acknowledged she had some concern about how big the commitment was.

“But years later we would be spending time at his parishes with our kids . . . and so many people embraced him and loved his homilies,” she said. “It was natural.” 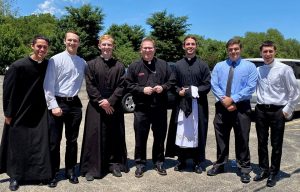 When the family accompanied Bishop-elect Tylka to the ordination of Deacon Austin Bosse and Deacon Nic Wilson at St. Mary’s Cathedral in Peoria on June 14, Landau said she was touched by the way the seminarians of the Diocese of Peoria approached him after the liturgy to welcome him.

“It was nice to see that energy around him, people excited,” she told The Post. “I said, ‘Louie, go stand over there for a picture,’ and they were looking at me like, ‘You’re talking to the bishop!’ I got an insight into what kind of a bishop he could be for Peoria, that he could hopefully bring his fresh ideas and youthful vigor to things.”

“Louie” is a common term of endearment used by the Tylka family, although for Linda Tylka he’ll always be “little Lou.”

One of his nieces likes the sound of “Uncle Excellency,” while his father has taken to calling him “BLT” for Bishop Louis Tylka.

“I always say, ‘Hold the tomatoes,’” Bishop-elect Tylka said, a reference to his general dislike of vegetables. That response was part of a Facebook video made before he left St. Julie Billiart in Tinley Park, where he served as pastor for six years before his appointment to the Diocese of Peoria.

“No matter who it is or what the situation is, he’s always caring about what’s happening or what he can do to make it better or help you,” she said.

Steven Dunning, Tésa’s husband, said Bishop-elect Tylka is accepting. “I really appreciate that he accepts me for who I am.” 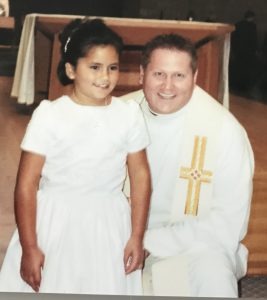 “Uncle Lou” was on hand when his niece, Emily Arvia, celebrated her First Communion. Family has always been very important to Bishop-elect Tylka. (Tylka family photo)

“He’s a fun guy. He’s wonderful to spend time with and we laugh a lot and have a good time,” she said. “It’s not all somber and serious. He likes to have fun, too.”

She also shared a time that has helped to define her brother and his ministry. It came in April 2019, when he traveled to El Paso, Texas, for an immersion experience with Catholic Extension Society on the border of the United States and Mexico.

“He was telling me the church is not a building to him, a building you come to. He said you have to bring Christ to the people,” Landau explained. “It’s something you carry with you and it’s something that’s created when people get together to celebrate.”

That missionary discipleship is an important part of who Bishop-elect Tylka will be, she said.

“I’ve been very impressed by his ministry, even before the pandemic. Then with his weekly addresses,” said Linda Tylka, referring to his “Midweek Moment” videos for the St. Julie Billiart parishioners. “I think he’s been very innovative, but I think he also touches people in a very unique way. That’s a gift.”

“One of the things I’ve been impressed with . . . is his commitment,” said Steven Dunning. “This is what he’s doing. This is where God’s called him. It sounds like he’s looking forward to everything that has to do with this diocese.”