Msgr. Rohlfs is granted senior status: influenced priests of diocese and beyond 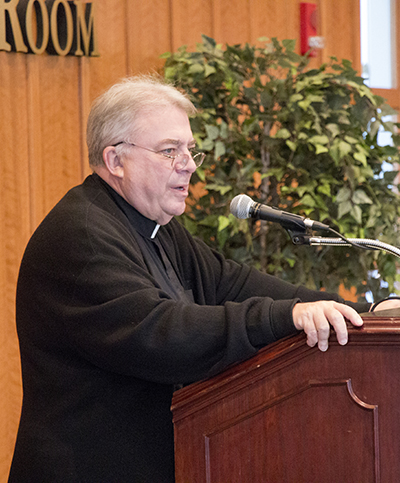 ST. PAUL, Minnesota — It’s safe to say that Msgr. Steven Rohlfs, P.A., has played some role in the life of every priest of the Diocese of Peoria for almost four decates.

Whether as vocations director, vicar general, teacher, administrator, spiritual director, or as rector of Mount St. Mary’s Seminary, Msgr. Rohlfs’ influence has been wide and actually extends to hundreds of additional priests around the nation.

But as he turned 70 in mid-June and was granted senior status, Msgr. Rohlfs pointed to five prophetic words spoken at his birth by a Hospital Sister that shaped his own life and vocation.

“Here comes our little priest” is what Mother Radegundis, a friend of Shirley Rohlfs who was assisting the physician, reportedly said as Mrs. Rohlfs gave birth to her son on June 17, 1950.

The story would be repeated to the boy as he grew in Lincoln and later Danville.

“I thought that’s what I was supposed to be, so I went with that,” said Msgr. Rohlfs. “I really never considered anything else because I thought that’s what God had asked me to do.” His path to the priesthood took Msgr. Rohlfs to St. Bede Academy in Peru, St. Meinrad Seminary College in Indiana, the University of Louvain in Belgium, and Mount St. Mary’s Seminary in Emmitsburg, Maryland.

Ordained by Bishop Edward W. O’Rourke on May 22, 1976, Msgr. Rohlfs’ priesthood has been marked by that desire to do what God — and the church — asks of him.

THE LORD’S CALL, THE CHURCH’S NEEDS

“I’ve tried to respond to the Lord’s call to be a priest and to do what the church needed me to do at the time she needed me to do it,” said Msgr. Rohlfs in a telephone interview from his apartment on the priests’ floor of St. Paul Seminary in St. Paul, Minnesota. He has assisted with spiritual direction and taught a class or two at St. Paul since 2015, and plans to continue to do so as a senior priest. 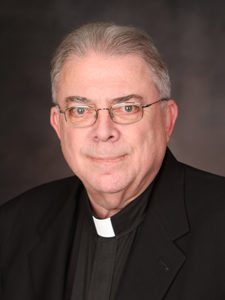 “Once you try to do what the church asks you to do because she needs you to do it, you end up having a happy assignment,” he told The Catholic Post.

A case in point was his second assignment. After two happy years as an assistant at St. Bernard Parish in Peoria, he initially balked when asked to be chaplain and director of religious education at Bergan High School, also in Peoria.

“Eventually I began to like it, and stayed there almost seven years,” Msgr. Rohlfs recalls. More significantly, while there “I got to be pretty good at promoting vocations to the priesthood, which was a gift I didn’t know that I had.”

After 13 of his Bergan students went to seminary, the Diocese of Peoria recognized and welcomed that gift. Msgr. Rohlfs served as associate director of vocations from 1983 to 1987, and was director from 1987 to 1993 – helping to recruit and form some of the largest ordination classes in diocesan history. Along the way he earned licentiate and doctoral degrees in moral theology, with a concentration in medical and sexual ethics, from the Angelicum in Rome.

He would take on leadership roles in a variety of diocesan ministries.

“I don’t think there was an office I didn’t have,” he said. “A position would come vacant and I’d say ‘I can do it if your need me to do it. Just give me another secretary.’”

The list is long. In addition to his vocations work, Msgr. Rohlfs for two decades was the bishop’s master of ceremonies. He has served as vice-chancellor, theological consultant to the bishop, president of the Peoria Area Pastors’ Board and the diocesan Presbyteral Council, vicar of the Peoria Northwest Vicariate, and episcopal vicar for Catholic Healthcare Ethics.

He has chaired the diocesan art and architecture committee and is a former diocesan director of cemeteries and the Propagation of the Faith.

In 1999, Bishop John J. Myers appointed him vicar general, chancellor, and moderator of the curia. And when Bishop Myers was appointed Archbishop of Newark in 2001, Msgr. Rohlfs was elected as administrator of the Diocese of Peoria until the installation of Bishop Daniel R. Jenky, CSC.

He was named a prelate of honor with the title of monsignor in 1993. And in early 2013, Pope Benedict elevated Msgr. Rohlfs to the rank of protonotary apostolic, the top level of monsignor and considered the highest honor bestowed upon a priest.

Msgr. Rohlfs believes that all of his diocesan roles were preparing him for what he considers his “best assignment” — as rector of Mount St. Mary’s Seminary in 2004. He would guide the largest Catholic seminary in the United States for the next 11 years, and in 2015 was named rector emeritus.

“I enjoyed that the most,” he says. “I did my best work at the Mount. It was my great privilege to train 258 priests to serve 28 different dioceses during that time,” said Msgr. Rohlfs, pointing out that 92 percent of them are still functioning as priests.

Among the imprints Msgr. Rohlfs has tried to leave on all seminarians and parishioners he encounters is a phrase he calls “the Gospel in a nutshell” . . . . “We’re here to learn to love on earth the way they love in heaven.”

Among the imprints Msgr. Rohlfs has tried to leave on all seminarians and parishioners he encounters is a phrase he calls “the Gospel in a nutshell.” He has repeated it to many audiences – in homilies, at retreats, in classrooms and at seminarian gatherings:

“We’re here to learn to love on earth the way they love in heaven.”