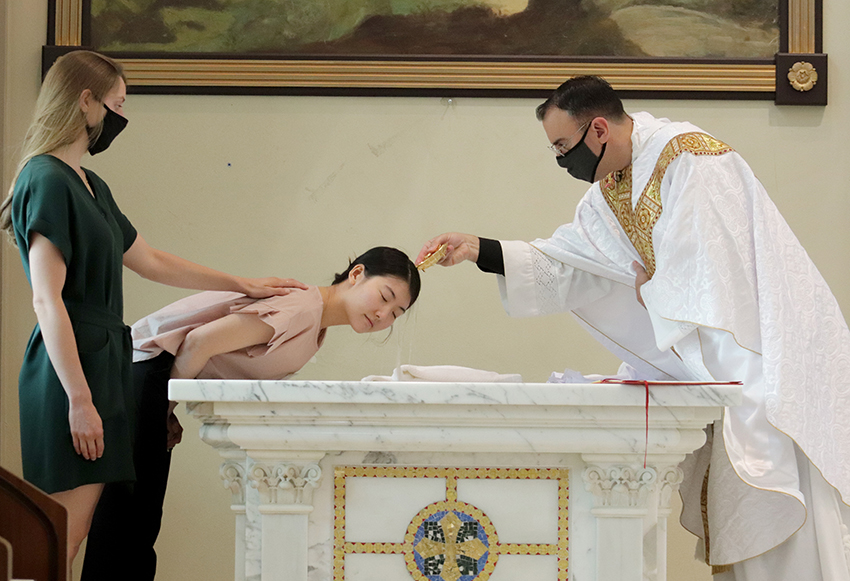 Father Robert Lampitt, head chaplain at St. John’s Catholic Newman Center in Champaign, baptizes graduate student Yoo Kyung Go as sponsor Ellie Porath assists during a special Mass on June 27. Two more were baptized, confirmed and received Eucharist for the first time that morning, while arrangements were made to receive another 13 students later that day and over the summer. The Catholic Post/Jennifer Willems

It was a long time coming, but the 285 women, men and children chosen by God as his own are now being welcomed into the Catholic Church through the Easter sacraments at parishes around the Diocese of Peoria.

Following guidelines regarding safety and social distancing, pastors are baptizing, confirming and giving Communion to people who have been praying and studying for months to be received into the church. That was scheduled to happen at the Easter Vigil, but had to be delayed indefinitely when public Masses were suspended due to the COVID-19 pandemic. 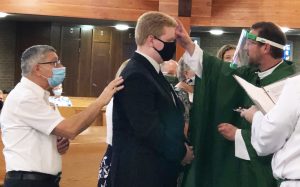 With Rick Couri’s hand on his right shoulder Henry Wefer of Morton is confirmed by Father Johnathan Steffen at St. Monica Church in East Peoria on June 28. Confirmed with him were Marilyn and Michele Peplinski. (Provided photo/Justin Cody)

Some parishes are celebrating the sacraments of initiation with people one at a time, such as at Holy Cross in Champaign. There has been a special Mass for each one, with the RCIA candidates making a profession of faith and being confirmed after the homily, and then receiving Communion for the first time during the Liturgy of the Eucharist.

Others, like St. John the Baptist in Clinton, have planned for people to receive the Easter sacraments during a regular weekend Mass. At the Clinton parish that will take place on July 11.

At St. Pius X in Rock Island, eight people will be welcomed into the church at a Mass for them and their families, friends and parishioners on Saturday, July 18. That includes two baptisms, according to Barbara Roedel, director of adult faith formation.

“I’ll admit that I was heartbroken when this pandemic hit during Lent and Easter was waylaid for all of us. That was painful beyond belief,” she told The Catholic Post. “There’s a sadness in me that this group will not get to experience the Easter Vigil.

“With that said, I am thrilled for my people. They’re happy. They’re at peace. They’re excited,” Roedel said. “I look forward to welcoming them as brothers and sisters in the Catholic faith.”

The last three scheduled sessions in their preparation took place through Zoom before Easter. At their request, meetings resumed over Zoom about six weeks ago.

“It wasn’t so much for the content, although we did that, but more for community,” Roedel said.

What happens at a Newman Center when college students have been sent home to complete the semester through remote learning? 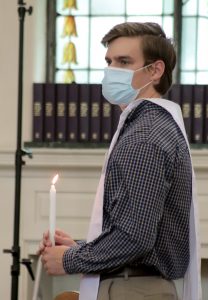 Dressed in a white garment, Chad Hoerr holds his baptismal candle, which represents the light of Christ. He returned to St. John’s Catholic Chapel in Champaign from Peoria last Saturday to celebrate the Easter sacraments. (The Catholic Post/Jennifer Willems)

Shawn Reeves, director of religious education at St. John’s Catholic Newman Center at the University of Illinois, established a closed Facebook group for his catechumens and candidates as a way of providing resources so they could keep growing in their prayer life and understanding of the faith.

He also created “share journals” that gave the students a look at his prayer life and encouraged them in theirs.

“The priests and I made sure we periodically assured them of what we knew from the diocese and the state, and that we hadn’t forgotten them,” Reeves told The Post. “So they felt connected. They felt thought about and cared for.”

Chad Hoerr of Peoria, who graduated in May with a degree in interdisciplinary health sciences, said he appreciated that ongoing support from the Newman Center. Last Saturday, June 27, he returned to St. John’s Chapel to be baptized, confirmed and receive his First Communion along with graduate students Wenyi Shang and Yoo Kyung Go.

At a second Mass that afternoon, another student was received into the full communion of the Catholic Church and five who were already Catholic were confirmed.

Three who were not able to return to campus will be received into the church at a Mass at the Newman Center later in the summer, while Reeves arranged for four more students to celebrate the sacraments of initiation in their home parishes.

Helping Hoerr to maintain the structure of daily Mass, Sunday Mass and adoration that he had established at the St. John’s Catholic Newman Center was Kolbe Schendl, a member of St. Vincent de Paul Church in Peoria and a 2017 graduate of Peoria Notre Dame High School. She attends Bradley University, where she is studying English and philosophy.

They have been dating for two years and begin each date with adoration. Schendl also taught him the rosary.

When Hoerr started cheerleading in his freshman year, Schendl encouraged him to continue to make adoration part of his busy days. It was that reverence for Jesus that inspired him to start the RCIA process at St. John’s last fall and has kept him coming back.

Last Sunday, instead of staying behind while Schendl went forward to receive Communion at Mass, Hoerr was able to join her.

EDITOR’S NOTE: More photos from the liturgy at St. John’s Catholic Newman Center will be posted on The Catholic Post’s page on Facebook.