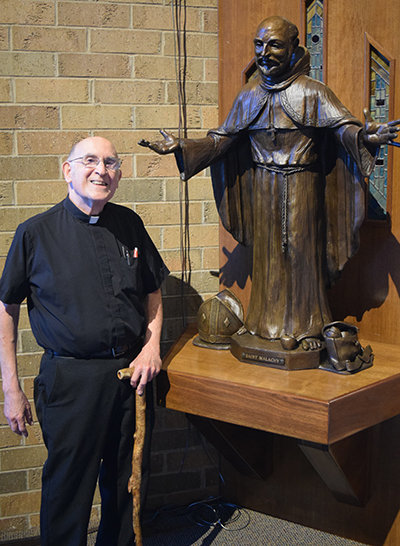 Father Michael Pakula poses near a statue of St. Malachy, the patron of the parish in Geneseo where he has served as pastor for 25 years. His 47 years of priestly service also included a long stint on the Diocesan Tribunal and seven years as a part-time hospital chaplain. (The Catholic Post/Tom Dermody)

GENESEO — When Father Michael Pakula moves to senior status on July 8 after nearly 47 years of priestly service, including the last 25 years as pastor of St. Malachy Parish here, he could write a book looking back on what he calls his “checkered life.”

“But I’m not going to,” claims Father Pakula, 76. He’ll much prefer spending more time in prayer, reflection, and visiting family when he moves this month to a small home just eight blocks from St. Malachy Church.

“In all honesty, if I were physically healthier I wouldn’t retire. I enjoy the challenge, and I feel so blessed.”

Still, Father Pakula knows his life has been filled with so many interesting twists, coincidences, and especially blessings that there is more than enough material to fill chapters.

“I think the story of my life is that ‘God writes straight with crooked lines,'” the pastor with Polish-Slovenian heritage says, quoting a Portuguese proverb.

His path to the priesthood was certainly a winding one. Born in LaSalle as the middle of three sons of Thaddeus and Pauline (Klopcic) Pakula, young Michael began considering his vocation while attending St. Hyacinth Grade School.

At the suggestion of an eighth grade teacher and on a scholarship, he went to St. Bede Academy in Peru. Set to continue his education at Illinois State University and major in history, thoughts of the priesthood returned that summer of 1962.

And so began an 11-year “crooked line” to ordination during which Father Pakula at alternate times:

He completed a degree in philosophy begun years earlier from Loras College in Dubuque, returned to the Indianapolis seminary for his theology degree and was ordained by Bishop Edward W. O‘Rourke on Sept. 9, 1973.

Father Pakula’s priestly life has had similar twists. First assigned as parochial vicar at St. Pius X Parish in Rock Island, he also served as secretary for what was then known as the Rock Island-Milan Cooperative Ministry. Father Pakula was often called upon to prepare marriage annulment cases, and his skills in that area were recognized by Bishop O’Rourke, who after five years summoned him to Peoria to work as an advocate on the Diocesan Tribunal. 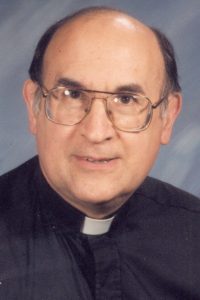 “He called me on the feast of St. Michael and said ‘It’s you,’” Father Pakula recalls.

What he thought would be a two-year assignment turned into a 17-year stint. “Msgr. (George) Carton helped at the Tribunal and pointed out you really touch many people’s lives with your work there,” Father Pakula told The Catholic Post. That proved to be the case.

He would also impact lives in a decade as parochial vicar at St. Monica Parish, East Peoria — including taking part in 32 Christ Renews His Parish weekends — and later as part-time chaplain at OSF Saint Francis Medical Center in Peoria.

“I had all kinds of wonderful human experiences at St. Francis,” he recalls, including being involved with a half-dozen heart transplants.

He also became active in prison ministry, visiting the Tazewell County jail and a boys’ detention facility in Hanna City weekly with clergy of other denominations.

BUILDING THE FAITH IN GENESEO

The crooked line of Father Pakula’s life and priesthood would eventually straighten when he was assigned in 1995 as pastor of St. Malachy Parish in Geneseo. It has been his home and pastoral focus for 25 years.

“We’ve had a lot of good things happen,” said Father Pakula. The parish had just built a new church when he arrived and faced a $2 million debt. That was retired six years later, and 10 years ago Father Pakula oversaw the construction of a $3 million addition, including new school andchurch offices, a kitchen and cafeteria, indoor gym and recess area, art and music rooms.

St. Malachy School is “thriving,” he said, and the parish is served by five active permanent deacons and has two more men in diaconate formation.

Father Pakula is especially happy with the parish’s social outreach. St. Malachy’s supports the Geneseo-Atkinson food pantry, the Humility of Mary homeless shelters, and for eight years has been in a “sister parish” relationship with St. Teresa of Kolkata Parish in Maynardville, Tennessee.

Each year, St. Malachy invites a guest speaker to present a mission appeal. Parishioners’ generosity has supported Catholic outreach efforts locally and overseas. Remembering those who influenced his path to the priesthood, Father Pakula has invited Glenmary Missioners to appeal on behalf of the poor in Appalachia, and various priests from Africa.

The decision to retire wasn’t easy and was hastened by the physical challenges of spinal issues which have impacted his mobility.

“In all honesty, if I were physically healthier I wouldn’t retire,” he told The Catholic Post. “I enjoy the challenge, and I feel so blessed.”