Father Heinz is granted senior status; grateful for the ‘privilege’ or priesthood 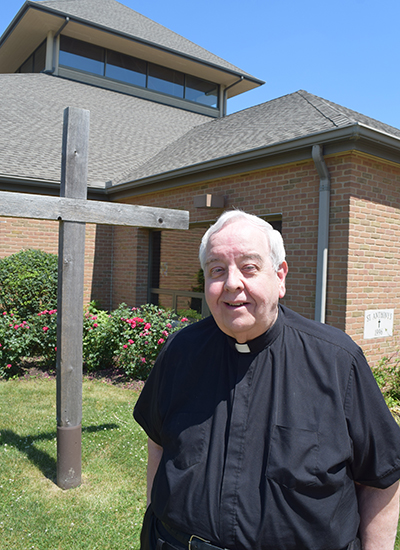 BARTONVILLE — Father David Heinz has celebrated Mass on a bus crossing the Alps, on a riverboat table in the middle of the Nile, on a large rock in Minnesota, and in hotel rooms around the world.

So the fact that his 43-year active priestly career is winding down with Father Heinz celebrating weekend Masses on an outdoor altar under the portico of St. Anthony Church here because of the coronavirus pandemic is not a major disappointment.

“This is really kind of luxurious,” he said of a system that allows his voice to travel over a low-power FM transmitter to his congregation in their cars. And the arrangement has even started a new tradition in the parish he has guided for 18 years:

“The first time we got together this way, I said to everyone ‘If you can hear my voice over the radio, honk your horn,’” Father Heinz, 70, told The Catholic Post. “I got to doing that as we start each Mass. Now it’s almost like the entrance or gathering song. It’s become a ritual that symbolizes the Extraordinary Mass of the Parking Lot.”

The pandemic is the latest historic event to serve as a touchstone in the life of the self-proclaimed “Kickapoo boy” who has traveled the world while serving as pastor of five parishes in the Diocese of Peoria. 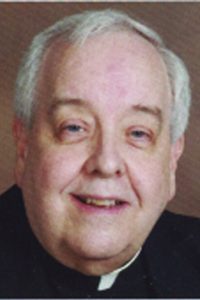 For example, he learned the “new math” as a student at St. Mary School in Kickapoo. The Second Vatican Council began when he was in junior high. Father Heinz was among the pioneer graduating classes at then-new Bergan High School in Peoria, and he attended St. Ambrose College in Davenport at the height of the Vietnam War.

But early in that progression he was already celebrating “Mass” on another unusual “altar” — his bedroom dresser — as he imagined being a priest.

He credits the School Sisters of Notre Dame who taught at St. Mary School and the dedication of Father Gus May, who guided the Kickapoo parish for 39 years, as fostering his vocation. Later influences included Msgr. Albert Hallin, who taught at Bergan and with whom Father Heinz would form a lifelong friendship.

After earning a degree in speech and drama with an emphasis in electronic media from St. Ambrose, he began studies for the priesthood at Catholic University in Washington, D.C. But calling himself “a hopeless Midwesterner,” he completed his theology degree at St. Meinrad Seminary in Indiana and was ordained on May 21, 1977.

Father Heinz’s first assignments were as parochial vicar at Holy Trinity Parish in Bloomington and St. Anne in East Moline, where he would eventually serve for two years with Msgr. Hallin.

In 1985, Father Heinz was named pastor of St. Thomas Parish in Philo. He called it a “plum” assignment for a young priest — “a great place with neat people, it was like going to Kickapoo” he said. His five years there were followed by four years as pastor of St. Mary in Westville and four years at St. Bernard Parish in Peoria, during which time he served as vicar of the Peoria Southeast Vicariate.

Each assignment had its own parish school.

“I had schools for 25 years as an assistant or pastor,” said Father Heinz.

That trend continued with gusto in 1998 when Bishop John J. Myers appointed Father Heinz as pastor of Holy Trinity Parish in Bloomington. While there, he worked with contractors and helped oversee fundraisers as the parish school expanded and plans were made for a new Central Catholic High School.

Because his father, Carl, was having health issues, Father Heinz sought an assignment nearer to Kickapoo. Bishop Jenky named him pastor of St. Anthony in Bartonville in 2002, and it proved to be a lasting fit.

“I can’t figure out where 18 years have gone,” said Father Heinz, who will move to an apartment in north Peoria after his retirement takes effect on July 8.

He praised St. Anthony’s parishioners for their generosity and grassroots community spirit. He especially is grateful for the way they not only welcomed but loved his mother, Margaret, when she came to live in a rectory apartment late in her life.

Because the new parish church was built only five years old before he arrived, St. Anthony had a $1.5 million debt. It would be retired several years later with a ceremonial mortgage burning. Father Heinz helped lead a joyful celebration of the parish’s 50th anniversary a year ago.

“You treat people well and they’ll treat you well,” is a theme Father Heinz has come to live by.

“We priests, by and large, don’t have a wife and kids of our own, so people think we miss out. But people let you into their family lives as priest at times when outsiders are not allowed.”

Early in his priesthood he began taking part in fundraising trips with Father Gerald Verdun. The pair of friends traveled widely around the globe, leading pilgrimages and learning about different cultures. His only regret is not getting to Australia and New Zealand. “I’m past that now,” he admits, acknowledging health issues that have slowed him down over the past decade.

Travel taught him tolerance and showed him the goodness in all peoples and cultures, which he applied in his assignments as people came to him with ideas.

“The pastor has to carry the ball, but if an idea isn’t against what the pastor’s doing or abhorrent or against church law, it’s just different,” said Father Heinz. “We’re kind of given parishes to manage, but it’s not our parish as priests,” said Father Heinz. “It’s their parish, the people of God, the community that’s been formed here.”

And Father Heinz is deeply grateful for what the people of God have given him — what he calls “the privilege of the priesthood.”

“We priests, by and large, don’t have a wife and kids of our own, so people think we miss out,” he said. “But people let you into their family lives as priest at times when outsiders are not allowed,” he added, from celebrating the birth of a new baby to praying with them and commending them to the Lord at the time of death.