First Communions being celebrated again, and on the ‘perfect’ day at Morton parish 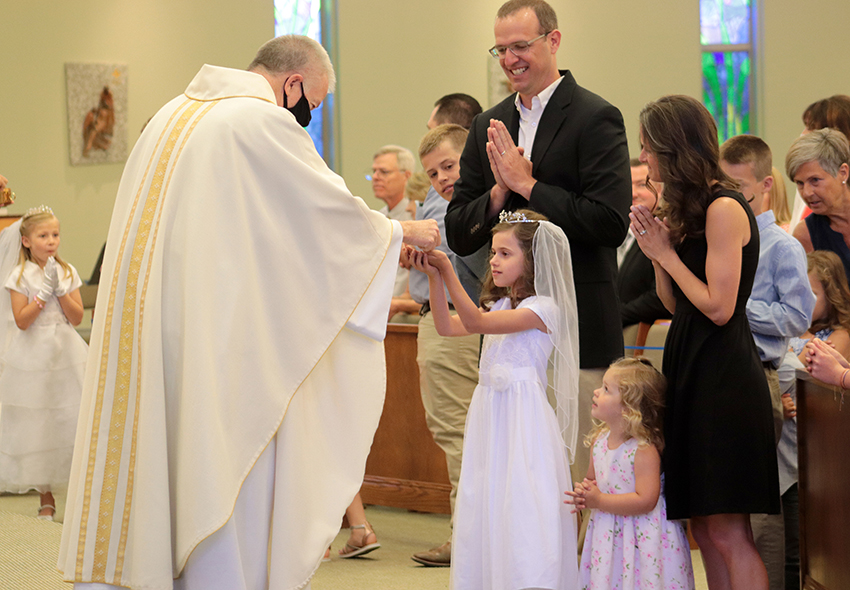 Leah Duffy receives her First Communion from Msgr. Gerald Ward as her happy parents Tim and Abi Duffy look on. Trying to catch a glimpse is big brother Beau, while little sister Cecilia watches intently. Leah was one of 35 children to celebrate the sacrament in two Masses last weekend at Blessed Sacrament in Morton. (The Catholic Post/Jennifer Willems)

MORTON — Telling them they all looked beautiful and handsome, Msgr. Gerald Ward welcomed 20 girls in white dresses and veils and boys in suits and ties to Blessed Sacrament Church as they received the Blessed Sacrament for the first time on June 13. He would offer the same welcome to 15 boys and girls the next day.

As it turns out, the long-awaited First Communion Masses took place as the Catholic Church observed the Solemnity of the Body and Blood of Christ, also known as Corpus Christi. 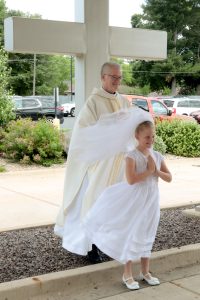 Brooksley Robeen’s First Communion dress was topped with her mother’s wedding veil, which was also worn by her older sisters, Mabry and Landry on their First Communion Day. Msgr. Ward smiles as the long veil billows in the breeze during a photo opportunity after the June 13 Mass at Blessed Sacrament Church in Morton. (The Catholic Post/Jennifer Willems)

“What a perfect way to celebrate that. It means a lot to me,” Msgr. Ward, pastor, said after Mass. “One of the joys we have as a priest is First Communion. To be able to do it on our parish feast day makes it all the more special.”

Traditionally held on the first weekend of May at the Morton parish, First Communion was delayed this year by the COVID-19 pandemic. Not only have churches been closed and public Masses suspended since mid-March, but schools finished out the academic year with children studying at home.

Now that permission has been given to reopen churches for Mass — with continued restrictions to protect the health and safety of all concerned — many parishes are rescheduling First Communion. Faith communities have also started receiving adults into the Catholic Church who have been waiting since Easter.

Confirmation will soon follow as Bishop Daniel R. Jenky, CSC, has extended to all priests the faculty to administer the sacrament until the Solemnity of Christ the King, Nov. 22.

The special circumstances of the First Communion celebration, which was livestreamed on the parish’s Facebook page, allowed Blessed Sacrament to do something different this year.

Attendance at Mass was limited to immediate family and grandparents, who were invited to come forward with their child and receive Communion as a family. Usually the children form a procession, according to Msgr. Ward.

During his homily, he encouraged them to take good care of the gift they were receiving.

“Jesus in the Holy Eucharist, in the Blessed Sacrament, that you children receive today for the first time is where you find all the strength and all the peace and everything that you need in life to be the child that God has called you to be,” he said.

Each family found a way to make the day special. For Brooksley Robeen, that meant wearing her mother’s wedding veil.

“It’s a little big, but it works,” said Crecia Robeen, who noted that Brooksley’s older sisters, Mabry and Landry, had also worn the veil.

“Awesome” is how Aubrie and Ava Brown described their First Communion as they posed for pictures.

“They’ve really been looking forward to this for a long time,” said their mother, Kate Brown. “They’ve worked really hard to get to this point.”

She was also relieved for a very practical reason.

“They are able to wear their dresses and they’re not too small,” she said with a laugh.

EDITOR’S NOTE: More photos from the First Communion in Morton will be posted to The Catholic Post’s site on Facebook.