As churches reopen for Mass, first returnees say it is ‘wonderful’ to be back 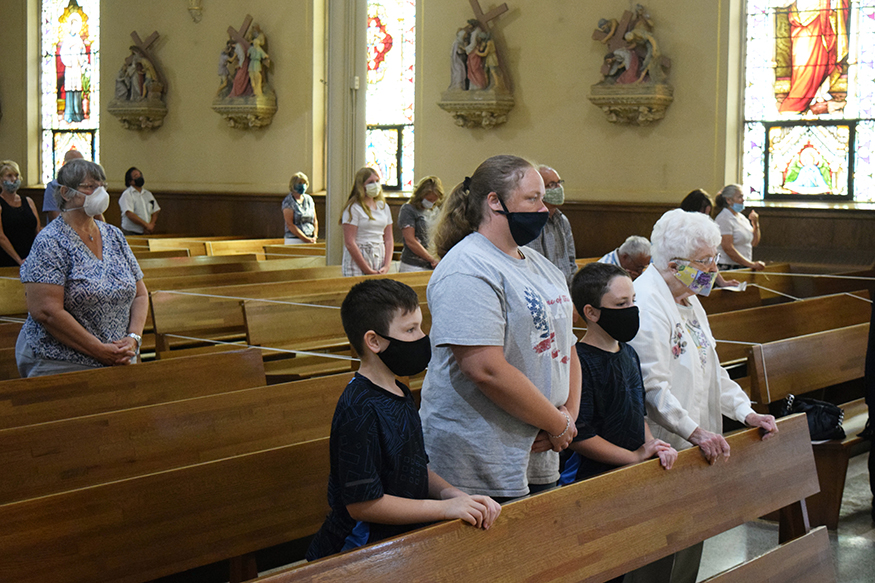 Wearing face coverings and in socially distanced pews, members of St. Michael the Archangel Parish in Streator take part in the 9 a.m. Mass on Sunday, June 7. Many churches in the Diocese of Peoria reopened for Masses last weekend, welcoming up to 25 percent of their seating capacity. (The Catholic Post/Tom Dermody)

STREATOR — “Wonderful” was the adjective of choice after Mass on Sunday when members of St. Michael the Archangel Parish here were asked how it felt to be back inside their church for the first time since coronavirus precautions closed it and others to the public almost three months ago.

“To see people and to pray together and to sing and hear the music,” said Sally Sullivan after reconnecting with a choir member friend after the 9 a.m. Mass. “Oh my gosh, it was wonderful to be back.” 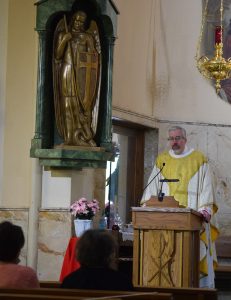 Msgr. Philip Halfacre thanked the “army of volunteers” who helped make the indoor, outdoor, and livestreamed Masses possible at St. Michael the Archangel Parish in Streator. (The Catholic Post/Tom Dermody)

Pat Surrock also described her return to the church as “wonderful.” Asked what she missed most about taking part in Mass at her church, Surrock’s quick reply was “All of it.”

St. Michael the Archangel was one of many parishes in the Diocese of Peoria to welcome parishioners in limited numbers to Mass inside their churches the weekend of June 6-7. Bishop Daniel R. Jenky, CSC, had granted permission to do so on May 29 — on conditions including enhanced health and safety measures and attendance limited to 25 percent of the church’s capacity.

“AN ARMY OF VOLUNTEERS”

“It’s nice to see all of you, even hidden behind those face coverings,” said Msgr. Philip Halfacre, pastor, as he began his homily on the Solemnity of the Most Holy Trinity.

Msgr. Halfacre thanked the “army of volunteers that made all this possible,” including an assembled team of 33 ushers that guided parishioners through six weekend Masses at the Streator church — three inside and three outside. The outside Masses were scheduled just a half hour after the start of the inside Masses so, if indoor capacity was reached, those turned away would have another option in just 30 minutes.

That didn’t happen last weekend. But what did happen was a successful system that showed a great deal of preparation and teamwork.

Those arriving by car for the indoor Mass were greeted by several ushers directing them to parking spaces, including on a grassy lot across Shabbona Street to the west of the church. The large parking lot to the east of the church was reserved for the outdoor Mass.

Once inside, another usher team directed Mass-goers to a pew. Ropes blocked off entrances so that only every third pew was available to maintain social distancing. All in attendance wore masks. An organist and cantor led music from the choir loft. Msgr. Halfacre celebrated Mass with no servers.

After Mass, the ushers assisted the departure, releasing attendees one pew at a time. But once outside, there was laughter and conversation as friends greeted one another in a scene like any other Sunday.

Sullivan and her choir friend are hoping they can sing together again soon, perhaps in the fall.

“We have missed it,” said Sullivan.

ADJUSTING TO THE “NEW NORMAL” 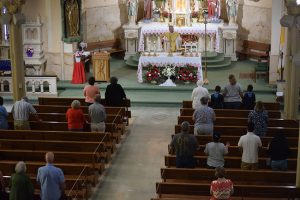 Ropes separated every third pew to maintain social distance during the Masses last weekend at St. Michael the Archangel Church in Streator. (The Catholic Post/Tom Dermody)

Msgr. Halfacre, who is also vicar general for the Diocese of Peoria and is helping all parishes navigate the changes resulting from coronavirus concerns and related state regulations, said he didn’t know what to expect in reopening the church for Mass.

“Mass attendance generally speaking is high in Streator,” he told The Catholic Post. “These are very devout people, and it’s a very Catholic area. On a weekday, it’s easy to have 60 people for Mass.”

That was about the number at the Sunday indoor Masses. But the busy weekend also included the parish school’s eighth grade graduation Mass on Saturday as well as the other five liturgies.

“Some people are still uncomfortable being in the church,” acknowledged Father Ryan Mattingly, parochial vicar, who celebrated the 9:30 a.m. outside Mass beneath a tent for parishioners whose cars filled the parking lot. “The bishop’s been very clear, you do not have to come.”

Msgr. Halfacre praised Father Mattingly for tending to technical details in recent weeks, from setting up a system to livestream Masses to establishing a low power FM radio station so people can hear the outdoor Masses in their cars.

“I wanted to call it ‘WMAS, the Mass,’” said Msgr. Halfacre of the parish’s new radio station that reaches only across the parking lot. He was told, however, that assigning call letters in this case is not allowed by the Federal Communications Commission.

Like their flocks, priests are also adjusting to Masses in the “new normal.”

Regarding outdoor Masses, Father Mattingly says “it’s very strange because you can’t see through the windshields because of the way the sun hits them. So it’s almost more anonymous than the internet.” 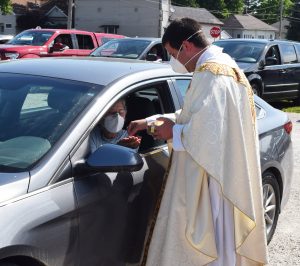 Father Ryan Mattingly, parochial vicar at St. Michael the Archangel Parish in Streator, distributes Communion to Michelle Henne at the conclusion of the 9:30 a.m. outdoor Mass on Sunday, June 7. (The Catholic Post/Tom Dermody)

Because reactions are unseen, in giving his homily, Father Mattingly says “I have to guess I’m doing OK.”

Msgr. Halfacre, who also serves as pastor of Sts. Peter and Paul Parish in Leonore, admitted it was intimidating at first to celebrate Mass with no one present, only the livestreaming camera. “But like anything else, you get used to it.”

“EVERYONE WILLING TO HELP”

People like Jim Schaibly, head usher, are among those making sure the faithful will soon be used to Mass back at church.

“Everybody has been so willing to help,” he said after guiding the last car off the parking lot after Communion distribution at the close of the outdoor Mass. In addition to the priests, he praised Connie Barton, sacristan, for her efforts.

“They told us what was going on and we had to figure out how we were going to do it,” said Schaibly, who has been an usher for more than three decades. “So far, it’s worked.”

“It’s what we need to to,” said Surrock of the masks and the social distance inside the church. “We all have to adjust.”