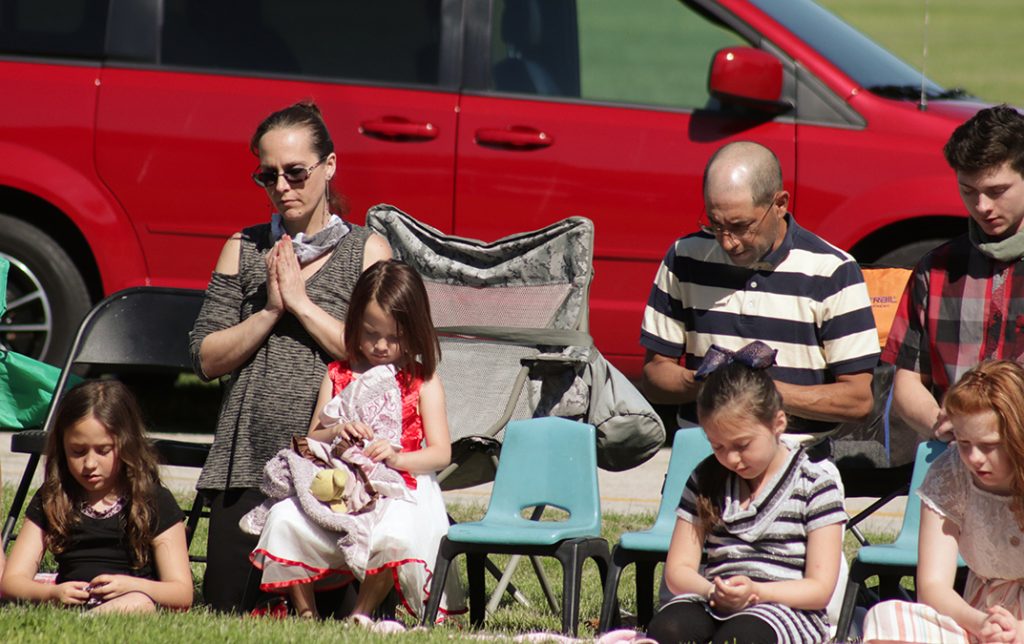 Jessica and Marcos Sanchez and their children and goddaughters pray the rosary, led by Father William Miller, pastor, before the Pentecost Mass on the lawn of Costa Catholic Academy in Galesburg. They were one of many family groups from the Galesburg Catholic Community at the May 31 liturgy. (The Catholic Post/Jennifer Willems)

GALESBURG — For the first time in 10 weeks, people from throughout the Galesburg Catholic Community came together for Mass on May 31 and it seemed to be the Holy Spirit’s own timing that made it possible.

More than 500 people walked in, rolled in by strollers and walkers, rode in on bicycles, and drove in, filling the lawn and parking lot of Costa Catholic Academy for the Pentecost Mass. Some chose to remain in their vehicles, while others sat in family groups or wore face coverings as they practiced social distancing between lawn chairs. 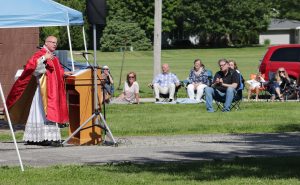 “This church didn’t die at the beginning of the pandemic. Now — not accidentally, I don’t think — the church is being born again into the world.” — Father Jacob Rose in his homily. (The Catholic Post/Jennifer Willems)

“How fitting it is that we are all gathered here in this unique way,” said Father Jacob Rose, parochial vicar of the Galesburg Catholic Community and the principal celebrant for the Mass.

“This church didn’t die at the beginning of the pandemic. Now — not accidentally, I don’t think — the church is being born again into the world,” he said. “What a joy that is to celebrate that as one parish family.”

The Galesburg Knights of Columbus, including Deacon Robert Rodriguez, helped to welcome people and make certain cars were lined up in the parking lot so a safe and orderly distribution of Communion was possible as people exited after Mass.

THE HOLY SPIRIT IS REAL

In his spirited homily, Father Rose reminded his listeners that the Holy Spirit is real, alive in us, and alive in the church. 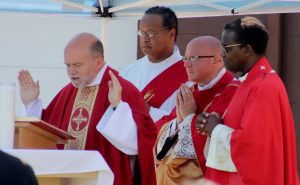 Father William Miller, pastor of the parishes in the Galesburg Catholic Community, reads part of the Eucharistic Prayer during the Pentecost Mass on May 31. Father Jacob Rose, parochial vicar, was the principal celebrant and Father Deus-Dedit Byabato, pastor of St. Aloysius in Wataga and chaplain at OSF Healthcare St. Mary, concelebrated. Assisting is Deacon Michael Crummer. (The Catholic Post/Jennifer Willems)

“In all of the sacraments, we encounter the Holy Spirit and that has ramifications and implications on how we respond and how we approach ourselves and each other . . . how we live our everyday life,” Father Rose said.

“If we let him, the third person of the Holy Trinity, the Holy Spirit, will come and desires to come and dwell within us and inform and transform our lives,” he said. “God the Holy Spirit will bring us back to life in a deeper way, so that Holy Mother Church can build up the kingdom of God.”

Speaking of sacraments, he assured parishioners the “unfinished business” of baptisms, confirmations and First Communions had not been forgotten. Those celebrations will take place as soon as possible.

Among those who is eagerly anticipating his First Communion is Harrison Wynes, the son of Dave and Krista Wynes. Dave, who is the new grand knight of the Galesburg Knights of Columbus, said he came into Mass optimistic but was overwhelmed by the number of people who attended Sunday morning.

“People still have fear of what’s going on,” he told The Catholic Post. “You really need to rely on your faith right now. Apparently today a lot of people were willing to rely on their faith and that was a very good thing to see.” 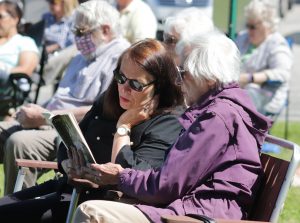 Ann Maxey Hix and her mother, Mary Ann Maxey, read the sequence extolling the gifts of the Holy Spirit during the Pentecost Mass in Galesburg on May 31. (The Catholic Post/Jennifer Willems)

“I think we were picking up this week that there was a lot of excitement and enthusiasm about this, but this showed just how much there was, how happy people were,” said Father Miller. “It was a great representation of the whole community.”

“I anticipated a large crowd, but I didn’t anticipate what I would be feeling — the joy of having parishioners around and seeing faces that I haven’t seen for 10 weeks. It was kind of overwhelming,” Father Rose said. “It’s like a gift to celebrate the Eucharist with parishioners instead of a camera.”

While everyone would like to return to church, the priests said they would be moving slowly at first in order to protect their parishioners. Daily Masses will resume on June 8, with liturgies planned for 8 a.m. on Monday and Friday at Immaculate Heart of Mary; 12:10 p.m. on Tuesday and Thursday at Corpus Christi; and 8 a.m. on Wednesday and Saturday at St. Patrick.

According to diocesan directives, the numbers of people who may attend will be limited to 25 percent of the church’s capacity.

Mass for June 7, the Solemnity of the Most Holy Trinity, will be celebrated at 10 a.m. on the lawn of Costa Catholic Academy again.

“If we continue having an outdoor Mass, we can worship together,” Father Rose said.

EDITOR’S NOTE: More photos from this celebration will be posted to The Catholic Post’s site on Facebook.