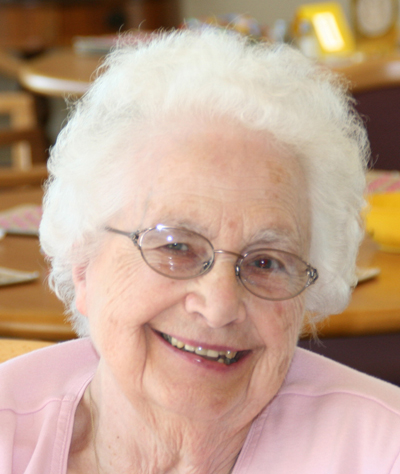 A Mass of Christian Burial for Sister Rosemary Murphy, OSB, will be livestreamed at 10:30 a.m. on June 1. (Provided photo)

ROCK ISLAND — A private Mass of Christian Burial will be celebrated on Monday, June 1, in the chapel of St. Mary Monastery here for Sister Rosemary Murphy, OSB. It will begin at 10:30 a.m. and be livestreamed by the monastery.

Burial will be in Calvary Cemetery, also in Rock Island.

Born in Keokuk, Iowa, on Aug. 7, 1924, Sister Rosemary was the daughter of Miles and Rose (McNally) Murphy. She attended Lincoln School in Carthage and St. Mary’s Academy in Nauvoo, and would go on to earn a bachelor’s degree in education from Marycrest College in Davenport, Iowa, and a master’s degree in education from the University of Illinois.

Sister Rosemary taught and was dean of students at St. Mary’s Academy and Sts. Peter and Paul School, both in Nauvoo, and at Bergan High School in Peoria. She also served as a house mother for a sorority at Bradley University in Peoria, and was kitchen manager for St. Mary Monastery.

She was preceded in death by her parents; brothers Myles and Thomas; and sisters Kathleen O’Donnell and Mary Anne McHugh. Sister Rosemary is survived by her sisters, Sister Margaret Murphy, OSB, and Patricia Gaughan; many nieces and nephews; and her Benedictine Sisters.