‘My flock is here’: Pastor celebrates Mass from truck bed in Granville, Hennepin 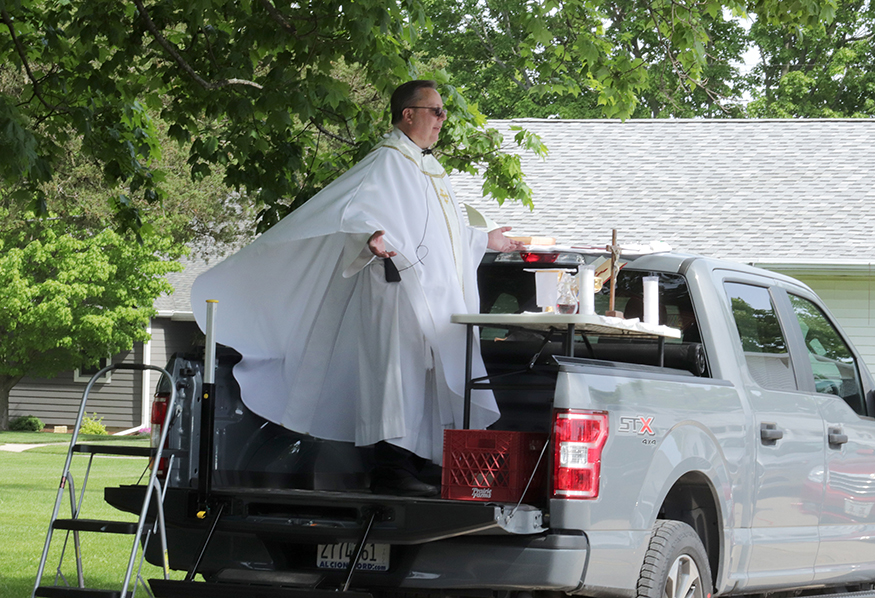 Rejoicing that "my flock is here," Father Patrick DeMeulemeester welcomes parishioners to an outdoor Mass at Sacred Heart in Granville in May 24. He celebrated Mass in the parking lot of St. Patrick in Hennepin earlier that morning. (The Catholic Post/Jennifer Willems)

GRANVILLE — Three days before his 25th anniversary of ordination, Father Patrick DeMeulemeester got a wonderful gift when he was able to celebrate Mass with his parishioners for the first time in two months. 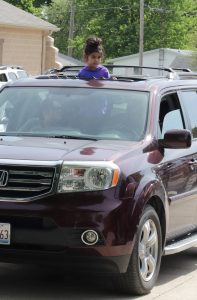 Yaretzi Fuentes makes certain that she can see and hear everything at the first Mass in two months at Sacred Heart in Granville. (The Catholic Post/Jennifer Willems)

The liturgies took place in the parking lots of St. Patrick in Hennepin and Sacred Heart in Granville on May 24. The bed of Bob Draper’s pickup truck served as the platform for the “altar,” but Father DeMeulemeester wasn’t complaining about the unusual circumstances.

“My flock is here,” he told The Catholic Post before the 10 a.m. Mass started in Granville, a broad smile hidden by his mask but visible in his eyes. “A shepherd without a flock is not good.”

Parishioners in about 50 cars were just as happy to see their pastor.

“Now this is country — your priest standing in the back of a pickup truck,” one of them said with a laugh.

Similar improvisations took place around the Diocese of Peoria as priests brought Mass and Communion to the people with the permission of Bishop Daniel R. Jenky, CSC. A May 15 letter from Msgr. Philip D. Halfacre, vicar general, made it clear that these liturgies must take place outdoors with people remaining in their cars.

Communion is to be brought to the people, either at the usual time or after Mass, according to Msgr. Halfacre’s letter.

Tears mixed with prayers of thanksgiving for many after Father DeMeulemeester made his way up and down the rows of cars, placing the Blessed Sacrament in outstretched hands.

GOD IS WITH US 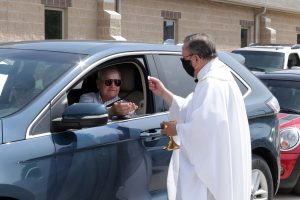 Ron Bluemer stretches out his hands to receive the Blessed Sacrament from Father Patrick DeMeulemeester during an outdoor Mass at Sacred Heart in Granville on May 24, the Solemnity of the Ascension. It was the first time the faith community was able to come together since public Masses were suspended March 14. (The Catholic Post/Jennifer Willems)

Even though the Solemnity of the Ascension marks Jesus’ return to the Father, he does not abandon us, Father DeMeulemeester said.

The Holy Spirit is one way God remains in us and with us, he explained, adding that every sacrament is an encounter with the living Christ.

“Today we’re encountering Christ in the sacrament of the Eucharist, where Christ is present body, blood, soul and divinity,” Father DeMeulemeester said. “That’s a God who loves us, who remains with us, 24/7.”

This is why, even during the darkness and uncertainty of the coronavirus pandemic, we can say, “Thank you, God, for being with me,” he told the people gathered before him.

“It was wonderful,” said Elaine Ossola, who came to the Mass with her husband, Doug. “Mass on the computer was good, but there’s nothing like being in the Real Presence. It was beautiful.”

EDITOR’S NOTE: More photos from the Mass in Granville have been posted to The Catholic Post’s Facebook site.