Despite circumstances, Class of 2020 grads are making memories and feeling loved 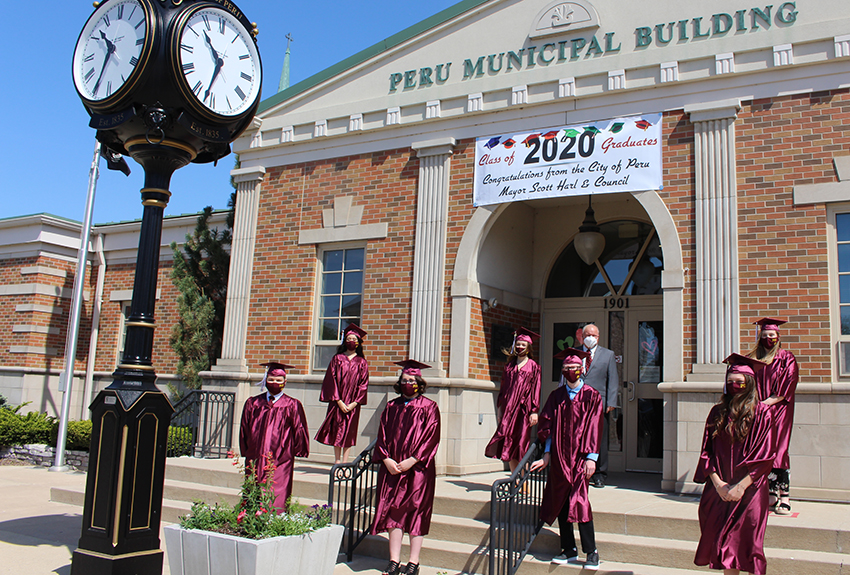 They might not have been able to gather at their schools for honors assemblies, Baccalaureate Masses and graduation ceremonies as originally planned, but members of the Class of 2020 ended the academic year knowing they were loved and would be remembered.

“You have done many great things, but these are not the best four years of your life,” said Father Michael Pica, chaplain at The High School of Saint Thomas More in Champaign during a Baccalaureate Mass posted to YouTube. “The best years are ahead of you if you choose to follow (God), to love him and to serve him.”

He said the faculty and staff would continue to pray “for you to become his disciple and to follow him throughout your entire life.”

In a video released at 2 p.m. on May 17, the time that graduation ceremonies would have been starting for Central Catholic High School in Bloomington, principal Sean Foster acknowledged that it was a tough way to end the year.

“Now is the time to lean into your faith,” he said, reminding them that St. Mother Teresa was able to accomplish so much by focusing not on what she didn’t have, but on what she did have.

“The best years are ahead of you if you choose to follow (God), to love him and to serve him.” — Father Michael Pica, chaplain, The High School of Saint Thomas More, Champaign, at livestreamed Baccalaureate Mass

“My challenge to you is to focus on what you have,” he said. That includes the memories they have made, the friendships they have shared, and what they’ve been able to do together.

“Focus on the faith as you grow and move to the next level,” Foster said.

With feedback from the 71 seniors and their families, Foster said graduation has been rescheduled for Sunday, Aug. 2. It will take place at 2 p.m. at Epiphany Catholic Church in Normal “provided public health guidelines allow for it.”

If stay-at-home orders are extended into August and do not allow for an in-person celebration, a traditional graduation ceremony in a virtual format will be created.

VARIETY OF PLANS IN PLACE

Brooke Rick, principal at Marquette Academy in Ottawa, said the school is planning to hold graduation for its 36 seniors on Sunday, July 26, on the football field. It will start at 3 p.m.

“We are hopeful that we can follow social distancing guidelines at that time and have a complete ceremony,” she said. “If not allowed, we will shift to a drive-through graduation ceremony.” 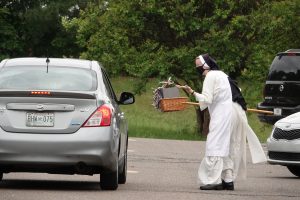 Peoria Notre Dame will have a virtual honors assembly this Sunday, May 24, and a virtual graduation ceremony for its 200 seniors on Sunday, June 7.

“We have tentatively planned an in-person ceremony for July 25,” Sister Sara Kowal, SCTJM, principal,  told The Post. “We have not determined a location yet, and we are also aware that we may not be able to do it in the end, however, we’re going to try.”

At St. Bede Academy in Peru, a virtual honors banquet was held on April 28 and the final school Mass was celebrated via livestream on May 5. Commencement is planned for June 20 and prom is scheduled for July 10.

Sara Stroud, principal at Alleman High School in Rock Island, said a virtual slideshow is being created for the seniors, with each of them in their cap and gown. It will include their awards, scholarships and future plans, and a speech by the valedictorian.

“We are planning an in-person graduation ceremony outdoors for June 6, either at a park next to our school or on our turf field,” she said. “Both venues are large enough for us to accommodate social distancing guidelines.”

In addition, medals bearing the image of St. John were blessed by Father Lampitt, who said they would be mailed to the graduates.

During his homily, he said there might come a moment when they would ask themselves, “Now what?”

“In these moments we are faced with the reality that we are not finished, that new work, that different work, that more work lies ahead. It can be a scary feeling,” he said.

The question shouldn’t frighten us, however, but motivate us and keep us focused on our ultimate destiny, Father Lampitt said.

“Not one of you was made simply to be a computer scientist or a teacher or a business person or a musician,” he told them. “No. You are ultimately made to become saints and to help others to do the same. Only when we have claimed our heavenly citizenship will we stop asking that dreaded question: Now what?”

Father Lampitt reminded them that someone had caught sight of them and introduced them to Jesus.

“Go and do likewise,” he said.

VALEDICTORIANS AND SALUTATORIANS IN OUR JUNE 7 ISSUE

The top graduates of the seven Catholic high schools and academies in the Diocese of Peoria will be profiled in the next issue of The Catholic Post.

The profiles will include their photos, favorite memories from their high school years, future plans, and what they found to be the advantages of Catholic education.