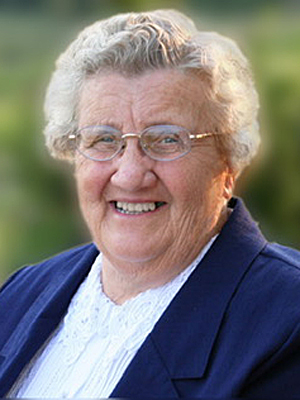 Because of restrictions on public gatherings due to COVID-19, a private wake service and Mass of Christian Burial were planned for May 18 in the chapel of St. Mary Monastery. Burial will be in Calvary Cemetery.

The daughter of George and Anna (Streib) Newcomer, Sister Anne was born Jan. 26, 1928, in Rockford. She attended Irving Grade School and the Academy of Our Lady, both in Peoria, and considered St. Mary’s Cathedral her home parish.

In 1955, Sister Anne worked in food service and was involved in pastoral care of the sick at St. Joseph Parish in Ivesdale. The rest of her long ministry was devoted to caring for the Benedictines and their students at St. Mary Monastery and Academy in Nauvoo.

After St. Mary Monastery relocated to Rock Island, Sister Anne served as a volunteer at the Botanical Garden, Sacred Heart Food Pantry, and the St. Joseph Evening Meal Program, all in the Quad Cities.

As she celebrated her 70th anniversary of consecrated life in March, Sister Anne said one of the most satisfying aspects of her vocation had been praying the psalms three times a day with her Benedictine community.

“It is the community’s dedication to daily Eucharist, the Divine Office, and Lectio Divina that inspires and invigorates me, calling me to join in that praise of God,” she said.

Preceded in death by her parents and a brother, George Newcomer, Sister Anne is survived by her sister, Marge Maurer; nieces and nephews; extended family members, especially Linda and Rick Skowronski; and her Benedictine Sisters.