The wait is over: Bishop allows parishes to offer Communion outside churches 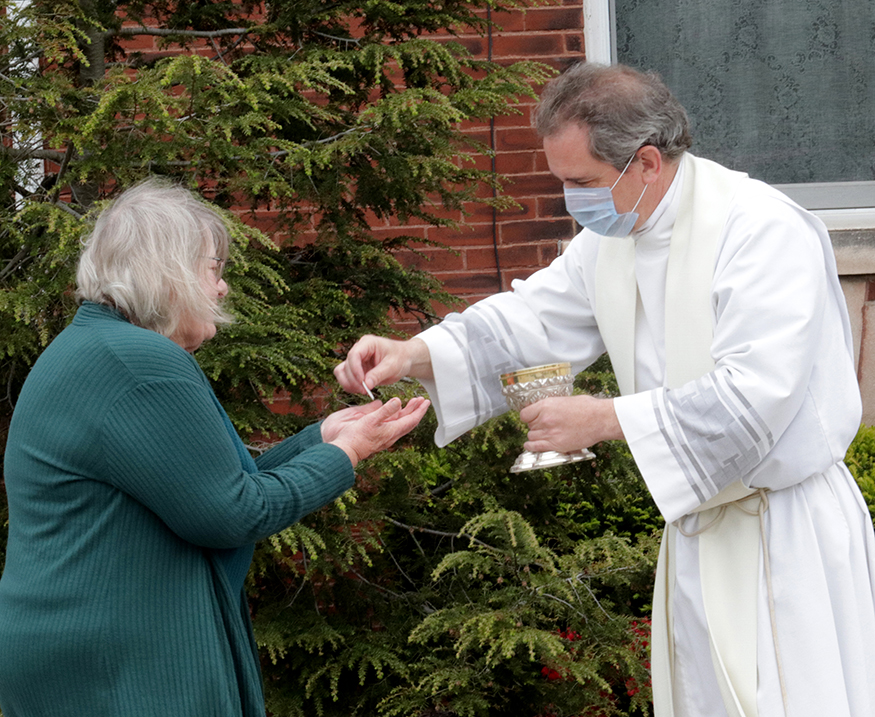 Father Jeffrey Stirniman, pastor, places the Blessed Sacrament in the hands of Connie Ley outside Historic St. Patrick Church in Bloomington on May 13. Bishop Daniel R. Jenky, CSC, is permitting parishes to make Communion available to the faithful until Masses are able to resume. (The Catholic Post/Jennifer Willems)

BLOOMINGTON — When Feli Sebastian heard that Communion would be distributed at Historic St. Patrick Church for the first time since March 14, she put on her coat and got in the car.

“Two months I’ve waited. There’s no delay,” she told The Catholic Post after receiving the Eucharist and spending a long time in prayer before a statue of the Blessed Mother outside the church on May 13. 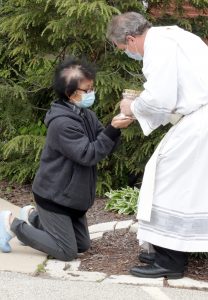 When Feli Sebastian of Holy Trinity Parish in Bloomington learned that Communion would be available after the 10:30 a.m. livestreamed Mass from Historic St. Patrick Church, also in Bloomington, she wasted no time in getting there. An Oblate of St. Mary Monastery in Rock Island, her day includes centering prayer, rosary and Mass and said receiving Jesus is “very, very important to me.” (The Catholic Post/Jennifer Willems)

Father Jeffrey Stirniman, pastor, and Father Geoff Horton, parochial vicar, were among many priests around the Diocese of Peoria to offer Communion to their parishioners as soon as possible after Bishop Daniel R. Jenky, CSC, said parishes were permitted to do that. While he left it up to each pastor to determine how this would happen, the bishop stipulated that the distribution should take place outside of church, with great caution to protect all concerned.

“One of the things that we were most concerned about is distributing Holy Communion in a reverent way and not just going through the mechanics, because it’s what the Lord deserves and what we need. The world needs more reverence,” Father Stirniman said. “This is the start of something wonderful — the closest thing we can get to the Mass with our people.”

RESULT OF MUCH THOUGHT

Father Horton said he and Father Stirniman — who also serve Holy Trinity Parish in Bloomington and St. Patrick Parish in Wapella — talked for a long time after Msgr. Philip Halfacre, vicar general, notified the priests of the diocese about Bishop Jenky’s decision on May 12. They decided to provide Communion after every livestreamed Mass and to do it at Historic St. Patrick Church because the parking lot was big enough to allow for the proper social distancing.

“There’s not really enough room over at Holy Trinity, unless we go over to the St. Vincent de Paul (Society) parking lot,” Father Horton explained.

People waited in their cars, watching Mass on their cellphones, laptops or tablets, or praying until they were encouraged to come forward by Deacon Al Lundy. Kevin O’Connell, director of discipleship for the parishes, and Nicole Henson, coordinator of evangelization and adult faith formation, squeezed hand sanitizer into the hands of everyone who lined up on the sidewalk in front of the church.

Masks were worn until the moment people received Communion and were replaced immediately.

The priests also took Communion to those who remained in their cars for health reasons.

Like Sebastian, several people knelt or stood in front of the statue of Mary on the east side of the church to pray afterward. The initial distribution took place on the feast of Our Lady of Fatima. 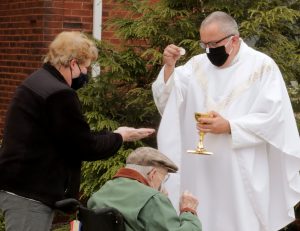 Father Geoff Horton prepares to place the Blessed Sacrament in the hands of Denice McCalip, a trustee at Holy Trinity Parish in Bloomington. With her is longtime parishioner Paul McNamee. They were first in line when Communion was distributed outside Historic St. Patrick Church in Bloomington on May 13. (The Catholic Post/Jennifer Willems)

Before Mass, Father Horton said, “We are almost as excited as you are to finally be able to distribute after all this time.”

He told The Post that although they have served parishioners by livestreaming Masses while churches have been closed to protect people against the COVID-19 pandemic, he was reminded of the Scripture passage from Matthew when Jesus asks, “Which one of you would hand his son a stone when he asks for a loaf of bread?”

“I feel like I’ve been giving my people stones for 10 weeks and I know that’s not the case — we’re doing what we can do,” Father Horton said. “But it’s so nice to be able to hear and answer what they’ve been asking for. It’s just so wonderful.”

Joan Wochner, a member of Holy Trinity Parish, said she appreciates everything.

“It’s been a huge project that we don’t see, I’m sure, to put this together,” she said, standing outside the car for a few moments of prayer with her husband, David. “It makes me especially grateful that they have gone through all of this effort so we could experience what we just did.”

EDITOR’S NOTE: More photos have been posted to The Catholic Post’s site on Facebook.