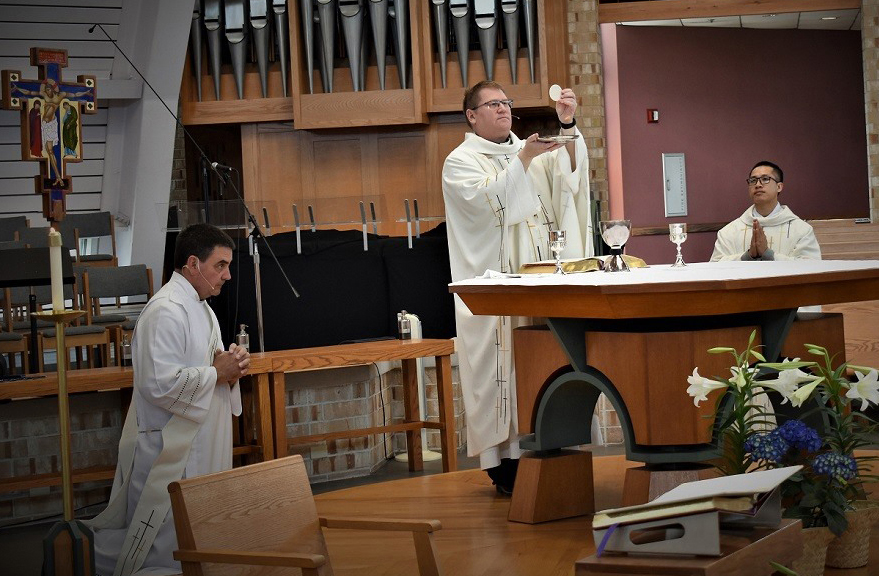 Father Louis Tylka celebrates Mass at St. Julie Billiart Church in Tinley Park in this photo posted May 2 on the parish's Facebook page. Pope Francis has appointed Father Tylka, a priest of the Archdiocese of Chicago, as Coadjutor Bishop for the Diocese of Peoria.

TINLEY PARK — When Father Lou Tylka was ordained as a priest for the Archdiocese of Chicago 24 years ago this week, among the gifts he received was a small statue of a shepherd kneeling to pet a lamb.

The newly appointed Coadjutor Bishop-elect of Peoria still displays the statue and it has been a guide throughout his ministry.

“My friend’s advice in giving it to me as a new priest was to always remember to be a gentle shepherd,” Coadjutor Bishop-elect Tylka told The Catholic Post in the first interview since his appointment to Peoria, announced on May 11. “Every time I see the statue it’s a reminder that I take to my heart and to my prayer.”

The 49-year-old priest has served in parish work since his ordination, including the last six years as pastor of St. Julie Billiart Parish in Tinley Park, a faith community of 2,600 households. He described his pastoral style as open and welcoming. 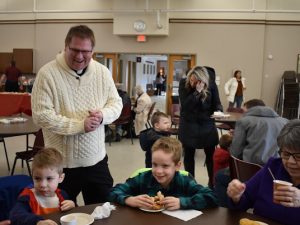 “People have to encounter Jesus and know that they’re loved by Jesus if they’re ever going to change their life for Jesus,” he said in the telephone interview. “And so I think I try to be welcoming to everyone. I think it’s important to listen, to hear what is going on in people’s lives and where they’re at. And to shepherd gently and slowly.”

Father Tylka’s priestly path took an unexpected turn on May 4 when his phone rang that morning just as he was sitting down in his office. The caller was Archbishop Christophe Pierre, papal nuncio to the United States, with news from Pope Francis.

“That was an interesting way to wake up on Monday morning,” said the pastor who learned he would soon be ordained a bishop in Peoria to assist and eventually succeed Bishop Daniel R. Jenky, CSC.

The ensuing days have found the gentle shepherd riding an emotional rollercoaster.

“I swing from a lot of excitement and joy, but then I start thinking about leaving my parish, my diocese, the only place I’ve ever lived,” said Coadjutor Bishop-elect Tylka. “I’d be lying if I didn’t say I’m a bit fearful.

And while Tinley Park, a southwest suburb of Chicago, is only about an hour’s drive from the northeast corner of his new Diocese of Peoria, the new bishop will be entering unfamiliar territory.

“People have to encounter Jesus and know that they’re loved by Jesus if they’re ever going to change their life for Jesus. And so I think I try to be welcoming to everyone. I think it’s important to listen, to hear what is going on in people’s lives and where they’re at. And to shepherd gently and slowly.” — Coadjutor Bishop-elect Louis Tylka

“I have only really driven through the Diocese of Peoria,” he said. Coadjutor Bishop-elect Tylka has been to Bloomington-Normal, where one of his five sisters went to Illinois State University, and recalls visiting high school friends who attended the University of Illinois in Champaign. While he doesn’t know any of the diocese’s priests, he looks forward to working alongside them and hopes they “welcome me as a brother.”

Well, he does know of one famous priest of Peoria — Venerable Archbishop Fulton J. Sheen — and has followed his cause for canonization. He recently watched Bishop Robert Barron’s “Pivotal Players” video profile of the famed media pioneer and author.

It is clear that Coadjutor Bishop-elect Tylka is very close to his family and counts on them for support.

“I simply would not be here today without their love,” he said in his video greeting to the diocese released on May 11.

He is the youngest of six children of Louis and Norma Tylka and has five older sisters. His mother died 30 years ago and his father in recent years moved to a townhouse just a block away from his son’s rectory in Tinley Park.

Mr. Tylka was a field engineer with IBM. His son recalled that the first color television the family owned was hand-built by his father.

“He never put it in a console so we could see all the pieces that went into it,” said Coadjutor Bishop-elect Tylka. “He wanted to show off his handiwork.”

His youngest sister, Mary Lou, has been battling pancreatic cancer since January. She and her husband now reside in Henderson, Nevada, but are making arrangements to move to Chicago and live in Mr. Tylka’s townhouse.

Because of coronavirus restrictions, Coadjutor Bishop-elect Tylka’s ordination and relocation to Peoria may not happen for some months. He considers it a blessing that he can remain in the area to be with Mary Lou, whose condition is considered terminal. He has asked for prayers as his sister “gets ready to go home to the Lord.”

Regarding the current global health crisis, Coadjutor Bishop-elect Tylka said this time of separation is teaching the church valuable lessons. 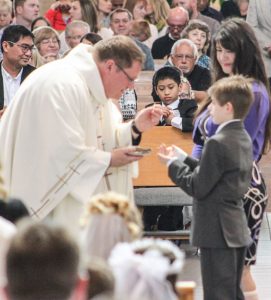 Coadjutor Bishop-elect Louis Tylka gives the Eucharist to a first communicant at St. Julie Billiart Church in Tinley Park in this 2016 photo from the parish’s Facebook page.

“I think on one level what we’ve learned is how much people value the sacraments, which is a good sign” he said. Bishop Ronald Hicks, an auxiliary bishop of Chicago, has referred to it as a “holy hunger.”

This unique time in history also has the church learning to use new technologies to engage Catholics outside the parish’s physical campus. That must continue as parishes become “more missionary,” he said.

Bishop-elect Tylka has yet to announce his episcopal motto, but it will likely focus on evangelization. Among his favorite Scripture quotes is Jesus’ “Great Commission” found near the close of the Gospel of Matthew: “Go, therefore, and make disciples of all nations, baptizing them in the name of the Father, and of the Son, and of the Holy Spirit, teaching them to observe all that I have commanded you.”

A FEW OF HIS FAVORITE THINGS

The Catholic Post invited Coadjutor Bishop-elect Tylka to list a few of his other “favorites” so Catholics of the Diocese of Peoria can better know him. Here are a few of his responses:

Coadjutor Bishop-elect Tylka has a dog, a Yorkshire Terrier named Tobit. Another Yorkie, Noah, died more than a year ago.

Also, for the record, while he and his father share the same first name, Louis, technically he is not a “junior.” The priest has no middle name.

In 2013, Father Tylka shared his vocation story with the Chicago Catholic, the newspaper of the Archdiocese of Chicago.

“It goes back to my sophomore year at Marian Catholic High School. Since both my parents worked, I was the only one in my family who attended Catholic school for 12 years. It was difficult to manage rides to and from school, so I couldn’t stay for clubs and sports. In sophomore year mother insisted I join the parish teen club. Every other Wednesday night she’d adjust her schedule to make sure I’d have a ride to and from church. I got to know the associate pastor, Father Dan Danowski. As the spirit would have it, in my senior year I was part of the team that put on the first Kairos retreat at Marian and Father Dan was the priest. Afterwards he asked me to think about being a priest. I was an altar server, but the possibility of priesthood never occurred to me. Then I couldn’t stop thinking about it.

“I did a semester at Purdue University at West Lafayette, but had no clue about a career. I knew I wanted to do something people-oriented. And then I came home for Christmas break and my mom was diagnosed with pancreatic cancer. I did an in-school transfer to Purdue’s regional campus in Hammond for a semester, to help take care of mom.

“By spring I decided if I was seriously going to look into priesthood I should go to Niles Seminary College. Mom was doing pretty well. She wasn’t supposed to last two weeks and she lived 10 months. She came to Niles once in early September, saw the campus for the first time, and told Father Bob McLaughlin, ‘This is where my son belongs.’ She died in October on the Feast of Our Lady of the Rosary.”