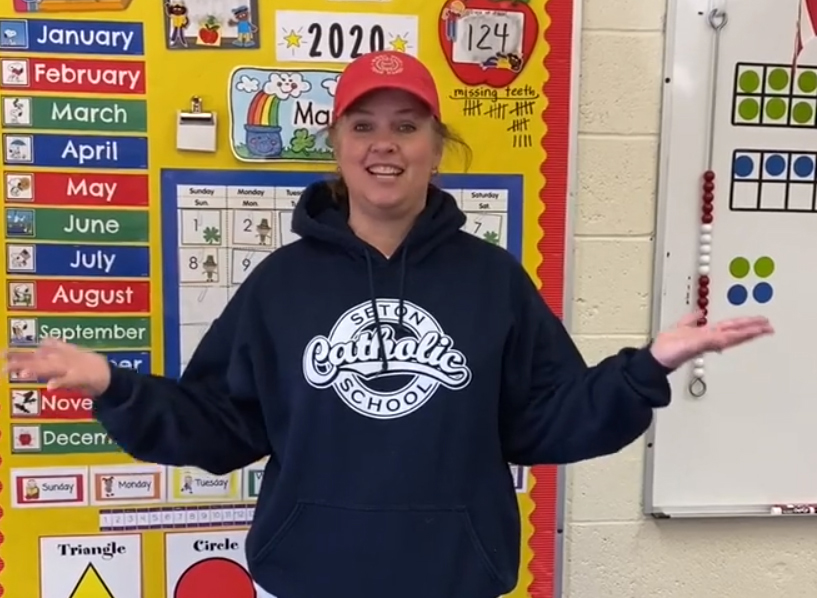 Sharon Bowker, one of the kindergarten teachers at Seton Catholic School in Moline, welcomes viewers to her classroom during a "virtual kindergarten roundup." Virtual tours and online registration are ways that families who want to explore Catholic education can do so during coronavirus restrictions. (Screenshot from setonschool.com)

Families who want to explore Catholic education for their children have some new options this spring as schools around the Diocese of Peoria offer virtual tours and online registration in an effort to welcome everyone and still keep them safe.

“Once we realized we were in this remote learning and weren’t going to return to school for the foreseeable future, it was just a matter of how are we going to reach those prospective families,” said Emily Blumenshine, principal at St. Michael the Archangel School in Streator. “I know they’re out there, but there’s no one in the building. What are we going to do?”

She has been working with Jill Seaton, information technology coordinator for the school and parish, to photograph the classrooms and other special places at St. Michael, as well as collect photos taken earlier this year when the classrooms were full and bustling with activity.

Blumenshine said they are gearing the virtual tour to parents of pre-school students, because that’s the need for next year. Eighteen of the 20 students enrolled now are moving up to kindergarten. There are 16 enrolled for next year.

“We like to showcase the fact that our pre-schoolers participate in all of our classes — what we call the ‘specials’ like Spanish and PE and art and fine arts and technology,” she said. “That will be a focus on the virtual tour, as well.”

“I don’t know what to expect, but I felt like if we don’t try it, we’ll never know,” she said.

Realizing that Seton Catholic School wasn’t going to be able to hold its annual pre-kindergarten and kindergarten roundups and pre-school open house, which take place just before and just after Easter break, Jane Barrett said it only seemed natural to make a virtual tour available for prospective parents in Moline, too.

Seton had some experience with this, since professional videos were made six or seven years ago. This time, they went with the talent they had on staff, technology coordinator and computer teacher Anna DeMeulenaere.

Barrett said the goal was to keep the videos to five minutes or less, and closer to three minutes if it could be managed. The teachers led the tours, speaking off the cuff. Featured are kindergarten teachers Sharon Bowker and Erica Rettig, pre-kindergarten teacher Jill Zmuda, and pre-school teacher Nancy Bush

“You can tell the teachers love what they do just by watching the video and hearing them talk about the program. That came across loud and clear,” Barrett told The Catholic Post. “So we’re thrilled.”

Barrett had a small role at the beginning of each video, welcoming people to the school, and then telling them how to get more information at the end of each segment. That was more than enough screen time for her, she said with a laugh.

“Everything I had hoped it would do, it has done,” she said. “Let’s hope it translates into good enrollment.”

Corpus Christi School in Bloomington is also working on a virtual tour. In the meantime, principal Adrienne Wilson said they’ve moved to an online platform for registration and she has personally contacted every family in the school to see how they’re doing.

Our Lady of Grace Catholic Academy in East Moline is trying online registration for the first time this year, according to principal Scott Turnipseed.

“We were in the planning stages before the virus but now it has become the best method to enroll during these unique times,” he told The Post in an email. “Our school’s education reputation with our families is still our best recruiting tool. Most of our new families have been recommended by a current school family.”

“We were in the planning stages (for online registration) before the virus but now it has become the best method to enroll during these unique times.” —Scott Turnipseed, principal, Our Lady of Grace Catholic Academy, East Moline

Wayne Brau at Visitation Catholic School in Kewanee said they use a “roll over” registration process, with each student automatically enrolled for the next school year unless the parents contact the school office to indicate a change of plans. A video of the pre-school and kindergarten is being produced and will be posted on Facebook for prospective families.

Many schools, like St. Mary in Kickapoo, have been enrolling students since Catholic Schools Week in January. Families that registered early received a $100 discount.

Visits will be available this summer at schools like St. Joseph in Pekin and St. Jude in Peoria. Both have made good use of Facebook and other forms of social media to keep families informed and connected.

“It’s important to me that every day we’re being remembered, that we’re still here, we’re still working, we’re still learning,” Blumenshine said. “If you don’t do that, it’s easy to forget and then come fall we won’t have the families that we could have had.”