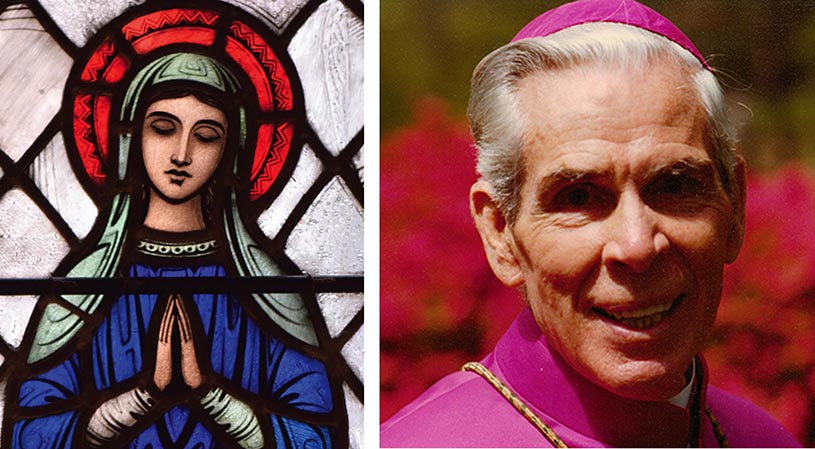 May 8 is the 125th anniversary of the birth of Venerable Archbishop Fulton J. Sheen. The stained glass image of Mary is from near his tomb at St. Mary's Cathedral in Peoria, while the photo of Archbishop Sheen is courtesy of the Society for the Propagation of the Faith / Missio.org.

EDITOR’S NOTE: The following letter was released on May 8, 2020, by Bishop Daniel R. Jenky, CSC. It was written on the stationery of the Archbishop Fulton J. Sheen Foundation. 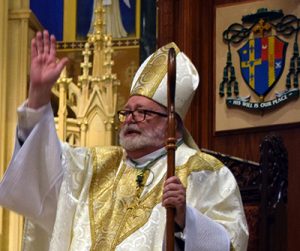 Bishops across the United States joined in a renewed consecration of our nation to the Blessed Virgin Mary as we entered the month of May which is dedicated to Our Lady. I joined them in also renewing the consecration of the Diocese of Peoria to her Immaculate Heart.

In a few days on May 13, the Church will celebrate the feast day of Our Lady of Fatima. It was on this day that the Blessed Virgin Mary started her series of apparitions to three shepherd children in the small village of Fatima in Portugal. Her message was one of penance, prayer and devotion to her Immaculate Heart.

The church continues to turn to Mary, especially during this time of pandemic, imploring her protection, as it renews its consecration to her Immaculate Heart. It does not go unnoticed, that 100 years ago, the two youngest children from Fatima, Francisco and Jacinta, died during another pandemic, the Spanish Flu. This outbreak infected 500 million people, about 1/3 of the world’s population at the time and was one of the deadliest pandemics in human history.

The revelation of Fatima is a reminder that
we live in a moral universe,
that evil is self-defeating,
that good is self-preserving,
that the basic troubles of the world are not in politics or economies
but in our hearts and our souls,
and that spiritual regeneration is the condition of social amelioration.

Let us turn to Venerable Servant of God Fulton J. Sheen today as an example of devotion to the Immaculate Heart of Mary and seek his intercession for the end of this current pandemic throughout the world.