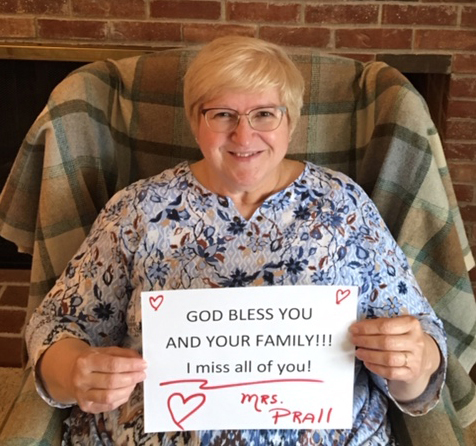 Pat Prall lis retiring after 46 years in education -- 25 of them at Schlarman Academy in Danville, her alma mater.This photo, which she submitted to the school for a video message to the students, lets them know they are on her mind and in her prayers daily. (Provided photo)

DANVILLE — It’s only 65 steps from Pat Prall’s classroom at Schlarman Academy to the school chapel. A religion teacher, she has walked that path so many times over the last 25 years that she knows every step of the way blindfolded.

“I don’t think I could do what I do without prayer,” she told The Catholic Post. “I think any religion teacher will tell you it’s a vocation. It’s not a job. It’s different. You have to invest yourself in it.”

Her only regret as she prepares to retire after 46 years of teaching — 44 of them in Catholic schools — may be that she wasn’t able to spend her final months in the classroom. Like so many others, she has been engaging her students in remote learning since the middle of March due to COVID-19 restrictions.

“I wish I could have finished it out in the classroom, but that’s all right. I’m still teaching and I send little notes back and forth to my students with the assignments, so we’re still communicating. It’s OK.” — Pat Prall

“I wish I could have finished it out in the classroom, but that’s all right,” she told The Catholic Post. “I’m still teaching and I send little notes back and forth to my students with the assignments, so we’re still communicating. It’s OK.”

Her real concern is for her students and their families, as it always has been. Her heart goes out especially to “our dear seniors.”

“You know they’re missing it, but they’ve just been troopers. They’ve been working through and I’m sure they’re doing a lot of FaceTime with friends,” Prall said.

What she will miss is the blessing of their caps and gowns at Mass and then seeing them receive those symbols of graduation from Father Bowan Schmitt, pastor at St. Paul in Danville and chaplain at Schlarman. Honors night and the May Crowning are other special occasions she has cherished.

One of the traditions Prall intends to keep is writing a poem for the graduating class.

“I will be working on that in the coming weeks,” she said. “It’s for them and things they know about and they’ve experienced. So it’s personalized for the class.”

Prall knows the importance of tradition at Schlarman Academy — she’s a member of the Class of 1970.

Born in Danville, she was raised in Westville and still belongs to St. Mary Parish there. She attended St. Mary School and would return to teach there for 19 years at the request of her pastor, Msgr. Julius Siesel. 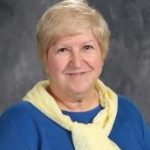 Even though she majored in English and history at Illinois State University, Prall taught religion right from the beginning at St. Mary and would serve as the director of religious education for many of her years at the Westville school.

She went on to earn a master’s degree in theology from Loyola University in Chicago in 1986.

When Jim Monfredini, the principal at Schlarman, asked if she would be interested in teaching there in 1995, she accepted his offer.

More than teaching the students about God, she strives to help them build a relationship with God. In recent days, that included having them watch Andrea Bocelli’s “Music for Hope” concert on Easter Sunday from the Duomo in Milan.

Not only did it give the students a chance to test the Latin they’ve studying, but it gave them a glimpse inside a grand European cathedral to look for how faith is expressed in the architecture.

“One of them spotted that the sanctuary lamp was burning while he was singing,” she said. “One of the responses was — and this sends chills down my spine — that ‘Jesus was listening to it, too, with us.'”

If there had been more time, Prall would have asked them to take a virtual tour of one of the national parks so they could reflect on Pope Francis’ encyclical on the environment, “Laudato Sí.”

Prall is filled with gratitude as retirement nears.

“Part of it is I’ve been so lucky in this vocation,” she said. “Oh my goodness, to be a teacher.”

While her heart still does a “happy dance” when she sees school supplies make an appearance in the fall, she knows it is time to go. Her fifth grandchild made his entry into the world on Leap Day and she hopes to meet him in Denver and visit his cousins in Oklahoma as soon as she can.

She’s also looking forward to spending time with David, her husband of 46 years who has retired, and working in the garden.

Prall notes that despite the age difference, she has something in common with her seniors.

“Schlarman is home,” she said, “just as I hope they will always think Schlarman is their home, too.”