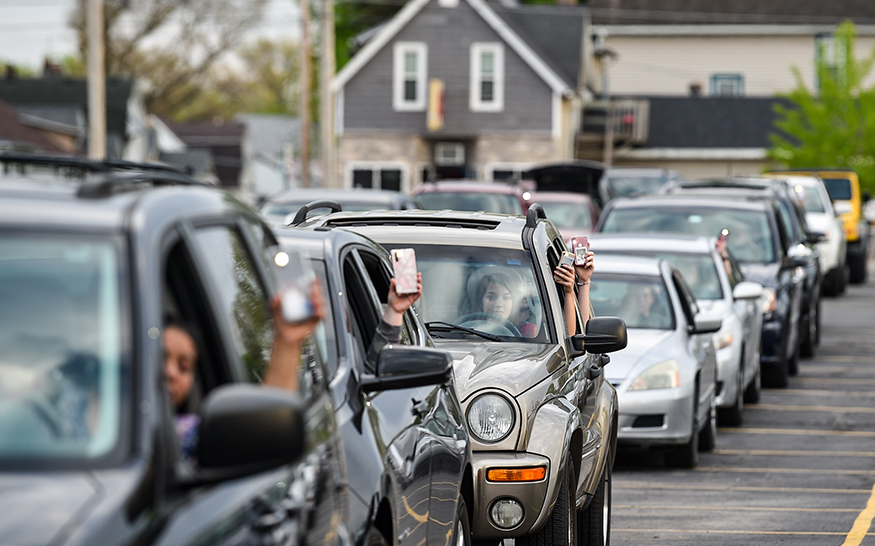 People hold out their cellphone flashlights during a prayer service for Alleman High School seniors Roberto Torres and Alicia Casas the evening of May 2 in the Rock Island school’s parking lot. Torres and Casas were injured in a car crash the previous day in Moline. More than 150 cars reportedly were present for the service. (Photo © Meg Mclaughlin/Dispatch Argus via ZUMA Wire)

ROCK ISLAND — It didn’t take long for word to spread through the Alleman High School community that two of their own, seniors Alicia Casas and Roberto Torres, had been involved in a car accident in Moline on May 1 and flown to University of Iowa Hospitals and Clinics in Iowa City, Iowa.

School administrators, counselors and Father Matthew Hoelscher, chaplain, responded just as quickly, putting together a prayer service for the next night in the school parking lot. Due to COVID-19 restrictions, everyone was asked to remain in their cars while prayers for healing and trust were offered over a speaker system. 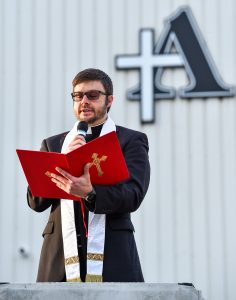 “This is Catholic education. It’s prayer first. Faith first. It’s just who we are,” said principal Sara Stroud. “So when there’s good that happens in our life, we give it to God. When there’s . . . a tragic accident, our first intuition is we’re going to lift them up in prayer.”

“It was very much our families and our students reaching out,” Father Hoelscher told The Catholic Post of how the prayer service came together. “The beauty of our faith is the best thing we can do is come together and pray. How beautiful it was that our families sought that as a gift of what we can give to (Torres and Casas).”

Planning for the prayer service included calls to the Office of Catholic Schools of the Diocese of Peoria, Rock Island Police Department, and Msgr. Mark Merdian, vicar for the Rock Island Vicariate and pastor of St. Pius X in Rock Island. All of them were supportive and Father Hoelscher said area priests have continued to call and offer prayers.

It was reported that Torres, a member of St. Mary in Moline, had two broken legs and a broken arm as a result of the crash. He had two surgeries over the weekend and because he is 17, his mother, Maria Lievanos, was able to remain with him.

Stroud described him as fun and lively.

Casas had surgery on May 4 to repair her pelvis, which was fractured in three places. A member of Christ the King in Moline, she is the daughter of Dianna and Cesar Casas.

Because she is 18, she is considered an adult and was not permitted to have her family at the hospital with her. The rules were relaxed long enough for her mother to visit briefly before and after surgery, however.

Casas received a full scholarship to Illinois Central College where she planned to play softball and major in psychology.

The good news, according to Father Hoelscher, is that neither appeared to have injuries to their internal organs or brain damage.

On May 6, he said that both students had successful surgeries and are beginning the long road to recovery.

“It will be weeks before either can walk, but their wills are strong and they have incredible families and friends to support them,” he told The Post.

Casas and Torres also share a strong faith and have been active in Teens Encounter Christ. Father Hoelscher said Casas had been part of summer retreats, too.

He drove to Iowa City on May 1, but was not allowed to go into the hospital. He met with Casas’s parents in the parking lot. On the morning of her surgery he called to pray with Alicia and her mother.

“Lord, you know as my students walk the corridors that there is a quality there that is guided by love for your Son. That’s why they’re here this evening, Lord. They come no finer.” — Father Daniel Mirabelli, CSV, Alleman director of development

“Alicia said that God’s got this — not even in the sense of everything will be perfect, but God’s got this moment of my pain,” Father Hoelscher said, adding that Mrs. Casas kept saying that her daughter’s pain was part of Jesus’ suffering and that meant grace would come from it.

When he talked to Alicia on Saturday, she acknowledged that she was in pain, but that she was going to offer it up for Roberto.

“We need to be reminded in our world that in a moment when there is so much suffering that an 18-year-old girl in a hospital bed and her parents who are separated from her can see that she has a share in Christ’s Passion and therefore her suffering has eternal value and can bring good to others,” Father Hoelscher said.

He told The Post that he wished everyone could have stood where he stood on Saturday night, on a raised platform, looking out over all the cars gathered before him. He had asked participants to turn on their cellphone flashlights and said they looked like candles.

He made sure Alicia Casas could see. One of her friends was talking to her on FaceTime and Father Hoelscher took the phone and scanned the crowd with it.

“It’s really a community support system with one common denominator — Our Lord Jesus Christ,” Stroud said. “We put our faith in him and we just trust.”

“Lord, you know as my students walk the corridors that there is a quality there that is guided by love for your Son,” Father Mirabelli said. “That’s why they’re here this evening, Lord. They come no finer.”

Citing their kindness and concern for each other, he asked God to bless the students, as well as the Alleman administrative team, teachers and alumni — “a family of over 12,000 people.”

“I was moved looking and seeing our current students and families, of course, but also the generations of alumni,” Father Hoelscher said, echoing Father Mirabelli.

“It’s our students who show the character of our Alleman family and the commitment of our families that make us a family,” Father Hoelscher said. “It’s Jesus Christ who makes us one.”