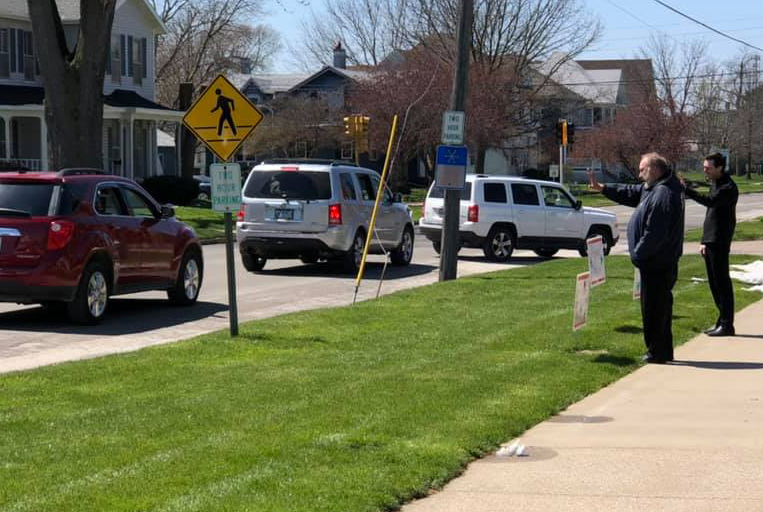 Msgr. Thomas Mack, pastor, and Father Daniel McShane, parochial vicar, wave as more than 100 cars filled with parishioners pass by the rectory at Immaculate Conception in Monmouth on April 18. Similar vehicle parades elsewhere in the Diocese of Peoria have been one way that parishioners are expressing love and gratitude for the priests during this historic time of separation because of the COVID-19 pandemic. (Provided photo)

When the rectory doorbell rang at about 5 p.m. on a recent Sunday, Father Johndamaseni Zilimu thought it was a couple from the parish bringing him a meal. It turned out more than 400 parishioners were delivering a feast of love in a parade of vehicles. 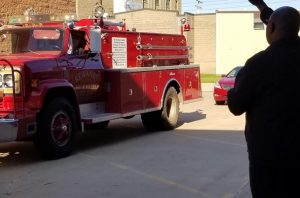 Father Johndamaseni Zilimu, pastor of Saint John Paul II Parish in Kewanee, waves to parishioner Kenny Gutschlag, who drove his antique fire engine as one of 115 vehicles in a surprise parade of parishioners that greeted the pastor on April 19. (Provided photo)

The stream of well-wishers in Kewanee late in the afternoon on Sunday, April 19, was led by organizer Vicky Lappin, whose car featured a large sign introducing the “Parade of Parishioners.” Behind her came about 115 more vehicles — even an antique fire truck — with horns blaring. Some social-distanced pedestrians also joined in, and many in the parade carried signs expressing love and support for their pastor. Among them were children from Visitation Catholic School.

“The only thing I could do was to wave, bless them, and say thank you to everybody that drove in front of me,” said Father Zilimu.

Similar parades in support of priests have taken place in recent days at other parishes in the Diocese of Peoria, including in Monmouth and Peoria.

A GESTURE OF LOVE, CONCERN, CARE

Acknowledging that he has experienced loneliness during these weeks of isolation because of the COVID-19 pandemic, Father Zilimu expressed deep gratitude for what he calls “a gesture of love, concern and care for me.” 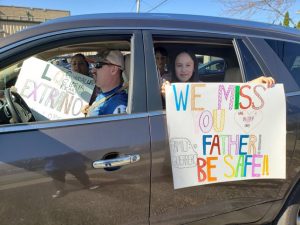 Members of the Guerrero family hold signs in both Spanish and English with messages for Father Zilimu during the parade of parishioners at Saint John Paul II Parish in Kewanee. (Provided photo)

A few days before the parade, Father Zilimu received a phone call from parish trustee Mary Ebert to check on how he was doing.

“I happened to mention that this is a very difficult and stressful time for me,” Father Zilimu told The Catholic Post. “I miss seeing my parishioners and celebrating Masses with them. I am a people person, so it is very hard for me.” Father Zilimu has continued to serve his parishioners by celebrating daily Masses at 8 a.m. and Sunday Masses at 9 a.m. that are livestreamed on the Saint John Paul II Facebook page.

Ebert told the pastor that she and her husband, Mark, would bring him a dinner that Sunday evening.

They brought so much more.

Joining the parade were parishioners and friends not only from Kewanee but also neighboring towns including Annawan, Sheffield, Toulon, Wyoming, Neponset, and Buda.

“We planned it as a way to lift Father John’s spirits,” said Mary Ebert, who was a “co-conspirator” with Lappin. The plan worked.

“Since last Sunday I have felt great every day,” said Father Zilimu. “It is always good to know that someone loves you. I love them, too, and pray for my parishioners and friends every day.”

SHOW OF GRATITUDE IN MONMOUTH

Meanwhile, in Monmouth, more than 100 cars took part in a parade on Saturday, April 18, to greet and thank Msgr. Thomas Mack, pastor, and Father Daniel McShane, parochial vicar. A parishioner who prefers not to be named came up with the idea “by the grace of God.” Representatives from the faith communities served by the priests — Immaculate Conception in Monmouth, St. Patrick in Raritan, and St. Teresa in Alexis — were asked to spread the word about the planned surprise. The Hispanic community was contacted by Martha Pinedo, parish secretary, while Randy Frakes, principal of Immaculate Conception School, alerted teachers and parents. 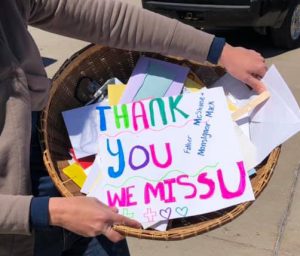 The cards brought for Msgr. Mack and Father McShane during a parade of parishioners on April 18 filled a basket. (Provided photo)

As in Kewanee, there was a bit of deception involved.

“I called (the priests) and told them my husband and I had something we wanted to show them and we would do this outside,” said parishioner Theresa Noel. “A time was established and, fortunately, neither of them questioned further!”

There was plenty of both during a parade of cars that would last nearly 45 minutes. Many in the vehicles had made signs or brought cards to drop in a basket.

“In the end we were all blessed,” said Noel. “Msgr. Mack’s and Father McShane’s responses touched all of our hearts and just seeing them was wonderful.”

A BIRTHDAY PARADE IN PEORIA

In Peoria, a parade of vehicles that drove by Sacred Heart Rectory in the city’s downtown was among the ways area Catholics helped Father Julio Faes celebrate his birthday on April 24. “It was a day full of surprises and affection,” wrote Father Julio in a Facebook post that included a video of the joyful parade. “I infinitely appreciate every gesture.”

Father Julio is a priest from Argentina assigned to Hispanic ministry in Peoria. He offers a daily Mass in Spanish and other livestreamed devotions on his Facebook page.