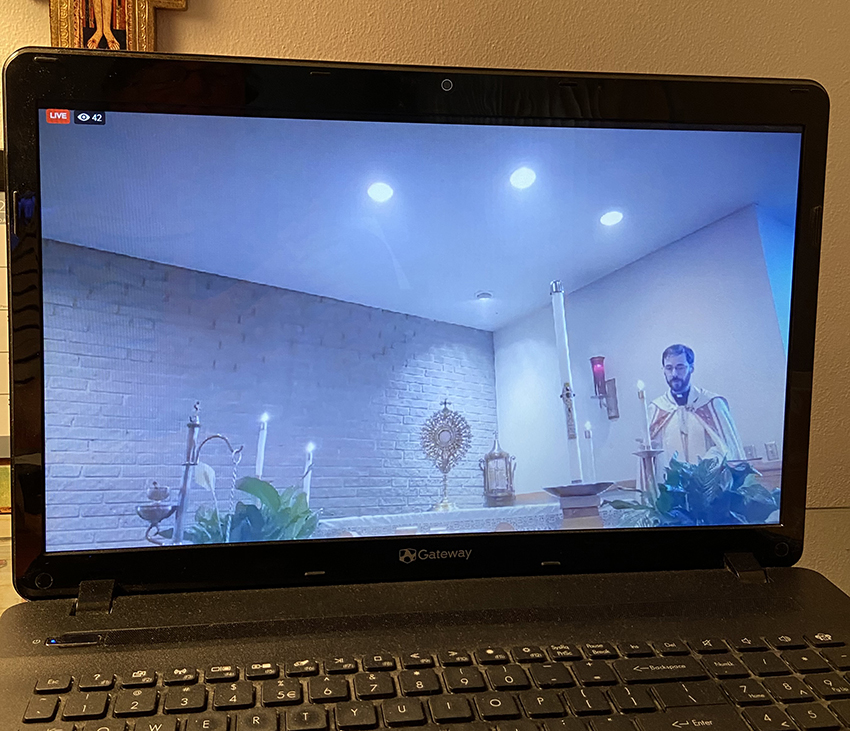 Father Timothy Hepner, vocation director of recruitment for the Diocese of Peoria, livestreams a Holy Hour for Vocations on the Facebook page of the Office of Priestly Vocations on April 14. (The Catholic Post/Jennifer Willems)

At some point the COVID-19 pandemic will end, but the need for holy priests and consecrated women and men won’t. That’s why prayers for vocations must continue, according to Father Timothy Hepner, vocation director of recruitment for the Diocese of Peoria.

Until people are able to gather in churches again, the Office of Priestly Formation has moved its Holy Hour for Vocations online. The first one in this format was held April 14 and remains available for viewing on the office’s Facebook page, facebook.com/FollowMePeoria. They will continue every Tuesday at 7 p.m.

The Holy Hours are broadcast on Facebook Live from the daily Mass chapel at St. Mary Church in Bloomington, where Father Hepner is in residence. He also livestreams Masses for the St. John Paul II Catholic Newman Center in Normal from the chapel on Fridays at 5 p.m.

“I don’t want, in 30 years, for people to look back and say, ‘In 2020, when we had COVID-19, there was a dip in priestly vocations and vocations to the consecrated life.'” — Father Timothy Hepner, vocation director for recruitment

“I don’t want, in 30 years, for people to look back and say, ‘In 2020, when we had COVID-19, there was a dip in priestly vocations and vocations to the consecrated life,'” Father Hepner told The Catholic Post.

“I’m just trying to take advantage, like a lot of my brother priests, of what we have in front of us and be creative with things,” he explained. “So I’m hoping we’ll have even more people involved than normal because it’s easier to turn on your computer and tune in for a little bit than it is to drive to a parish.”

A Holy Hour for Vocations begins with exposition of the Blessed Sacrament, followed by a reading from Scripture and brief reflection on vocations by Father Hepner. He said a long period of silent prayer follows, which provides the time of intimacy with Jesus in the Eucharist that people are craving.

The Holy Hour concludes with a litany, prayers for vocations, and Benediction. When people can be present they have an opportunity to venerate a relic of St. Thérèse of Lisieux, the patroness of vocations for the Diocese of Peoria. On April 14, Father Hepner offered a blessing with the relic.

He is convinced that if people “set out into the deep” as Jesus asked the disciples to do in Luke 5:4-11 and pray, that the environment will be right for fostering vocations. When that happens, Jesus will do the rest.

And it’s working, Father Hepner said. Last year there were 17 seminarians studying for the priesthood at Immaculate Heart of Mary Seminary in Winona, Minnesota, and Mount St. Mary’s Seminary in Emmitsburg, Maryland. This year there are 22.

Austin Bosse and Nicolas Wilson, two of the seminarians at Mount St. Mary’s, are preparing to be ordained to the transitional diaconate. That ordination, which had been planned for May 17 and is being rescheduled, will set them on the path to priestly ordination in 2021.

For more information, follow the Facebook page for the Office of Priestly Vocations. Masses and other devotions are being livestreamed there, as well.