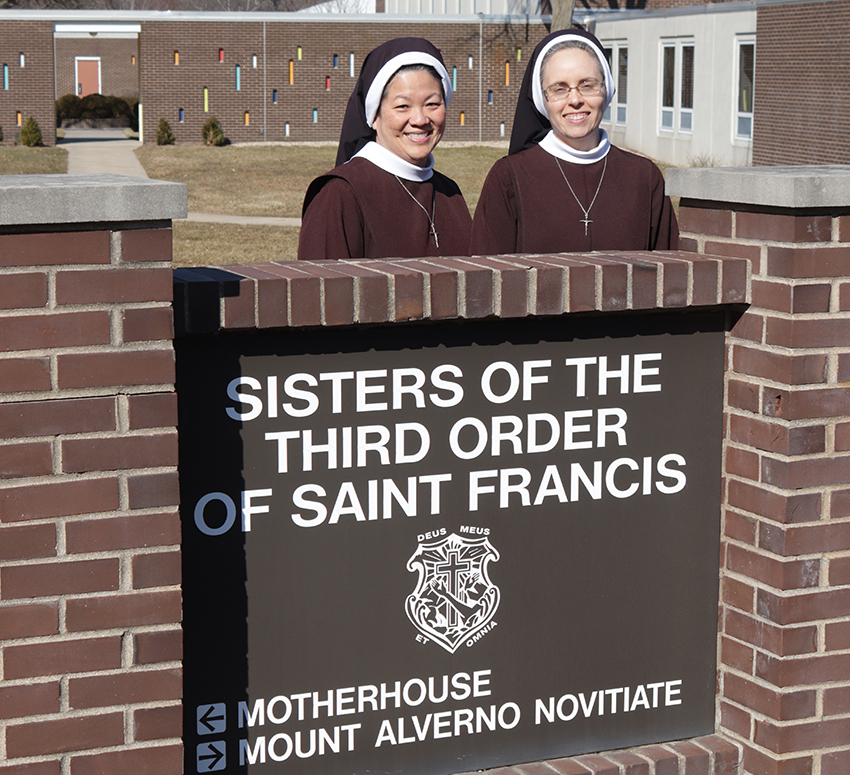 The new vocations team of Sister Teresa Paul Selamat, OSF, and Sister Rose Therese Mann, OSF, stand at the entrance to the East Peoria motherhouse of The Sisters of the Third Order of St. Francis and the new sign for Mount Alverno Novitiate. (The Catholic Post/Jennifer Willems)

EAST PEORIA — In religious formation, there is a delicate balance between giving people enough space to pray and discern what God is calling them to and offering enough community to provide example and support.

To provide that balance, The Sisters of the Third Order of St. Francis have moved their formation program from Peoria back to their East Peoria motherhouse. The Mount Alverno Novitiate was blessed and rededicated during a prayer service led by Msgr. Rick Oberch, chaplain, at the end of February.

“I said, ‘OK, that’s your house. That is the novitiate. Transform it back into a place to form and work with young women,'” Sister Judith Ann Duvall, OSF, major superior, said during a recent open house. “So they were here, rolling up their sleeves. We were helping them find furniture pieces and moving this here and that there.”

In the early days, The Sisters of the Third Order of St. Francis worked with those discerning religious life near the hospital in Peoria. It was noisy and busy there, however, so the formation program moved to West Peoria until Mount Alverno Novitiate was blessed and opened on the motherhouse grounds in East Peoria in 1963.

In 2007, the Franciscan community established its House of Formation on the grounds of OSF Healthcare Saint Francis Medical Center in Peoria. That is now known as St. Francis Convent and is home to three Sisters who work in hospital or corporate ministry services.

Mount Alverno Novitiate occupies two floors in a wing of the East Peoria motherhouse that includes a gymnasium, pool, library and computer room, an extra kitchen, dining room and meeting space. One floor will likely be dedicated to postulants and those who are visiting the community, while the other will be for novices and temporary professed Sisters.

The main chapel sits at the heart of the motherhouse and is available for both those who are already members of the Franciscan community and those who are prayerfully considering religious life.

“Especially for someone in formation, trying to ground themselves in their religious consecration, building that relationship with Christ and separating themselves from the world, they kind of need to be in an environment where they can ‘go off in the desert,'” said Sister Rose Therese, who entered the community in 2003, making her first profession in 2005 and her final profession in 2010. She had been director of vocations since November 2011.

“Even for those who are professed and out there working, this house is like a haven,” said Sister Teresa Paul.

She entered The Sister of the Third Order of St. Francis in 2012 and made her first profession in 2014. She made her final profession last August.

Sister Teresa Paul said they have a lot of room — and rooms — to grow.

“It is exciting to see what God’s going to send us,” she said.