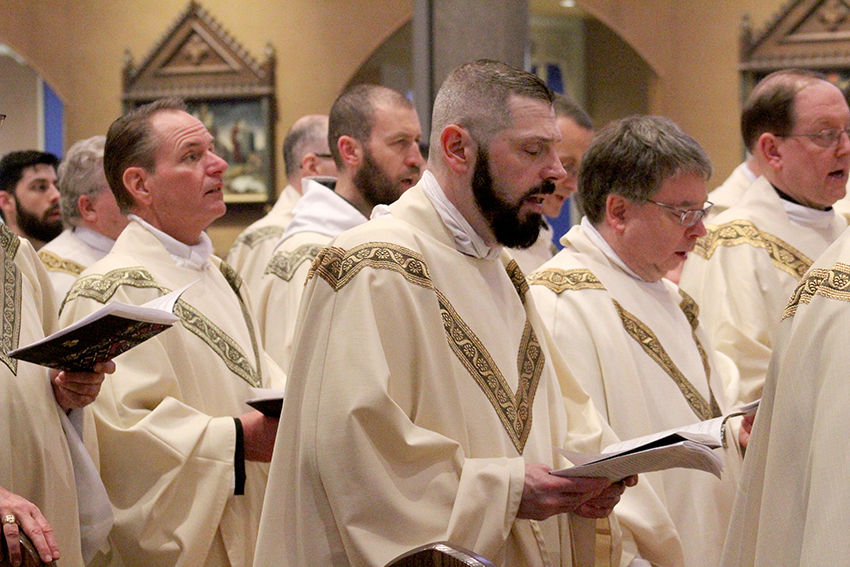 The priests of the Diocese of Peoria renew the promises they made at ordination during the 2019 Chrism Mass at St. Mary's Cathedral in Peoria. The diocese's priests are offering words of hope and encouragement to their flocks as we approach Easter. (The Catholic Post/Jennifer Willems)

While it’s true that the Body of Christ will not be able to come together to celebrate Easter, the members of that body are still united. That’s a cause for joy, according to priests around the Diocese of Peoria, who encouraged people to have hope as they ride out the COVID-19 pandemic.

“We’ve got to realize we’re one in Christ Jesus in baptism. That’s a fundamental unity and reality whether we see each other or not,” said Msgr. Eric Powell, pastor of Epiphany Catholic Church in Normal, after blessing hundreds of his parishioners on Palm Sunday. (See the related story on this page.)

Msgr. Powell added that there are countless believers that have gone before us, but are still one with us in Jesus, through baptism.

“So it’s nice to see each other, but that’s just the tip of the iceberg of the Christian faithful,” he said.

Msgr. Stanley Deptula, pastor of St. Matthew Parish in Champaign and St. Boniface Parish in Seymour, said priests are suffering because they are unable to celebrate the Easter sacraments with their parishioners. He sees these days as a time of great spiritual creativity, however.

“They call us to really consider what is most essential of Catholic life, Catholic worship, and especially Holy Week,” he told The Catholic Post. “So on the spiritual side, this is a wonderful invitation to go deeper into the true meaning of Holy Week.”

At the heart of that message, Msgr. Deptula said, is that Jesus is in charge.

“In these days when we may feel helpless, we remember Jesus is in charge. Jesus wins. Jesus is victorious.” — Msgr. Stanley Deptula

“He is not a pawn in a larger game. Jesus is in charge of the events that are unfolding,” Msgr. Deptula said. “He takes up his cross, he accepts the chalice of suffering, he chooses the Father’s will and by that gains salvation for the whole world.

“In these days when we may feel helpless, we remember Jesus is in charge. Jesus wins. Jesus is victorious,” he said.

“The call of Holy Week remains the same and that is the call to conversion,” said Father Jeremy Freehill, parochial vicar at St. Pius X Parish in Rock Island.

Using the fruits of a priests’ retreat and Marian pilgrimage in France and his desire to teach, he has been posting “Sermons in Solitude” to the parish’s Facebook page (Saint Pius X Church, Rock Island) during the pandemic. He is one of many priests making use of social media to connect with his parishioners.

“I would encourage people to take advantage of the stillness that the world is experiencing right now, the extra time, to hear the Lord saying even more so to ‘Turn to me,’ and commit our life to him.” — Father Jeremy Freehill

“There is suffering in not being able to enter our churches to pray, suffering in not being able to be a part of those sacred liturgies, but the call to conversion remains the same,” Father Freehill told The Post. “I would encourage people to take advantage of the stillness that the world is experiencing right now, the extra time, to hear the Lord saying even more so to ‘Turn to me,’ and commit our life to him.”

Father Joe Baker, parochial vicar at Epiphany Catholic Church in Normal and chaplain at Central Catholic High School in Bloomington, also talked about the longing people are feeling for the Mass, the Eucharist, and each other, and how that’s leading them to reassess their priorities.

“It’s time to see what positives we can gain from this,” he said. “Any suffering, any evil, any trial that we have to go through, there’s always something that we can grow from. If we try to do that, if we take the bull by the horns and acknowledge that this isn’t perfect but there’s something I can gain from this, then I think we can make it a good Holy Week.”