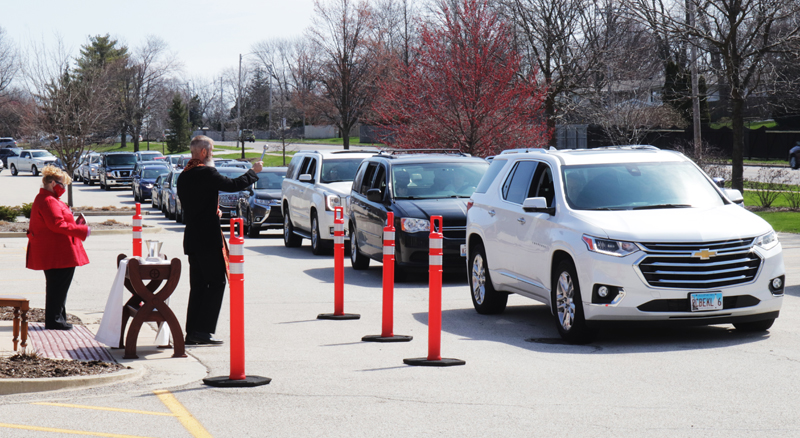 Msgr. Eric Powell sprinkles holy water on one of the hundreds of cars filled with parishioners from Epiphany Parish in Normal that drove by to receive a blessing and Holy Week Survival Kit on Palm Sunday. They lined College Avenue to wait for an opportunity to turn into the entrance to the church parking lot. (The Catholic Post/Jennifer Willems)

NORMAL — For four precious hours on Palm Sunday, priests and parishioners at Epiphany Catholic Church were able to share smiles and greetings as between 800 and 900 cars drove through the parking lot to pick up Holy Week Survival Kits.

Due to the cancellation of public Masses, it was the first time they had seen each other in a month. Even though each car could only linger long enough for a blessing from either Msgr. Eric Powell, pastor, or Father Joe Baker, parochial vicar, it proved to be a moving experience for everyone.

“It was touching because I haven’t seen any of the kids — I haven’t seen anyone. I’m used to being in the classroom, so seeing the kids is very life giving because they’re so vivacious, humorous and simple,” Msgr. Powell told The Catholic Post after the last of the cars and the people inside had been sprinkled with holy water.

Seeing school families and the other parishioners also provided a welcome connection for the priest, who admitted to feeling like “a fish out of water” with only videos and other technology to offer words of comfort and hope to his people.

A PROMISE OF NEW LIFE

The blessing Msgr. Powell and Father Baker used was the “Prayer over the People” taken from the new votive Mass in Time of Pandemic that was released by the Vatican on March 30. 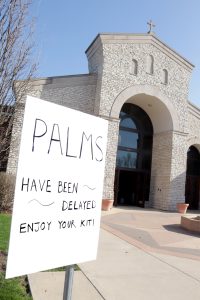 A sign in front of Epiphany Church in Normal notes why palms were not included in the Holy Week Survival Kits on Palm Sunday. (The Catholic Post/Jennifer Willems)

The Holy Week Survival Kits, which were put together under sterile conditions and left to sit for a few days before being distributed on April 5, were the parish staff’s way of “thinking outside the box.” It’s something Msgr. Powell encouraged families to keep doing during Holy Week and beyond.

He said the kits contained holy water, an image of Mary, and flower seeds as a sign of hope and new life.

“Once we emerge from this the families are encouraged to plant the seeds in the garden so as the flowers spring up and remain into the fall they will be a reminder of a new promise, a new beginning,” Msgr. Powell explained.

The kits also had a small cross with the words “Good Friday 2020” written on it as a memento of these days, he said. It will allow families to gather around the cross and venerate it as they would if they were in church on Good Friday.

Candles were included so families could use them for the Easter Vigil. He is encouraging them to light the tapers after dusk on Holy Saturday.

“So all they have to do is spend a few minutes each day to be plugged into Holy Week,” Msgr. Powell said.

As another aid, he created a prayer sheet that has something for every day of Holy Week. At the end of each day’s rituals there’s a blessing that parents can impose on each other and then their children, since they are the first evangelizers of their families.

An important part of the Holy Week Survival Kits was a missalette, so people could follow along in prayer throughout the week. The 250 packets that were prepared were gone in an hour, but each car that followed still received a missalette along with a blessing.

Cindy Myers and Staycee Hynes, pastoral assistants, ended up taking them out of the pews to make that possible.

“Fortunately we didn’t run out of missalettes,” Msgr. Powell said. “That was our last gift.”

Originally they hoped to provide blessed palms, but had to revise their plans after the Diocese of Peoria issued a directive that this should not happen until after public Masses resumed.

Fernando Cornejo, who drove through with his wife Jennifer and daughters Kate, Carmen and Lauren, said he appreciated the effort. 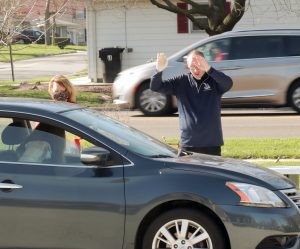 “It’s just really important for us to keep our faith,” he told The Post. “It’s hard times and you feel you have nowhere else to turn. You turn to God. That’s pretty important to us.”

Once she had received her Holy Week Survival Kit, Deb Kane sat in her car at the end of the parking lot and watched what was happening for three hours.

“It’s beautiful, isn’t it?” she said. “How many times do this many people come together as one? That unity comes from the love of God. There’s a lot of division nowadays and here it feels like people have a common purpose.”

“I had to put my sunglasses on because I was crying and I didn’t want them to see me crying,” Hynes said after blowing kisses and waving to people all morning as she assisted Father Baker. “To connect over this was so powerful and so moving. It has helped to start to refill my bucket to see all these folks.”

“It was so beautiful to see all of these pilgrims come up and all they wanted, really, is to get a blessing. That’s why they came,” said Myers, who assisted Msgr. Powell. “They didn’t come for a bag of things, even though that was nice. They came for the blessing of their spiritual father for the kickoff of their Holy Week.”

Several other parishes around the Diocese of Peoria, including Holy Trinity in Bloomington, St. Matthew in Champaign, St. Mary of Lourdes in Germantown Hills, Immaculate Conception in Monmouth, and St. Vincent de Paul in Peoria, also set up a Catholic Survival Station with various resources, or provided a Holy Week Survival Kit or Holy Week Devotional Bag for parishioners.