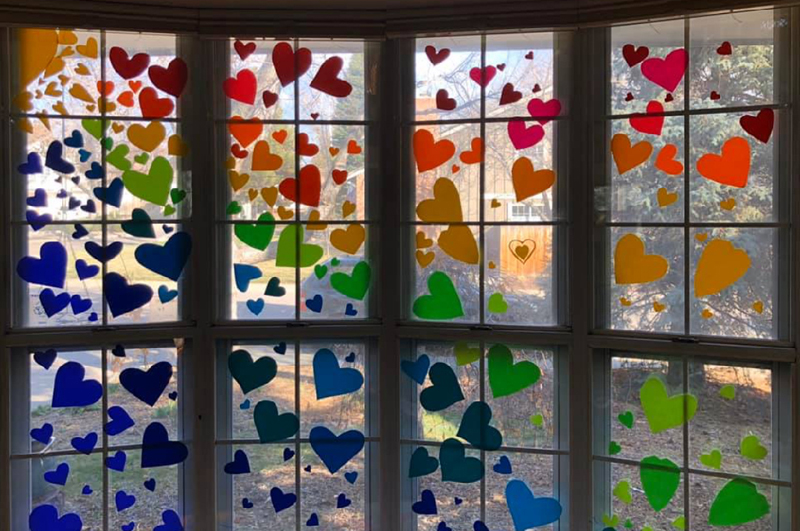 Designed as a "social distance scavenger hunt," Heart Hunters has turned into a way for people to come together by sharing love and kindness, according to founder Krista Wynes of Galesburg. This is one of the photos shared by the group's 600,000 Facebook followers. (Provided photo)

GALESBURG — As precautionary measures to prevent the spread of COVID-19 caused people to shelter in place, Krista Wynes offered them a way to connect by sharing their hearts. They responded to her call for a “social distance scavenger hunt” by placing hearts on windows and doors, making her new Heart Hunters Facebook group a community that is 650,000 strong and growing.

“I have come to realize, as the Facebook group has grown, that hearts really are a symbol of love and kindness and, I think, unity because every human being has a heart inside of them, so it brings us all together,” said Wynes, a member of Immaculate Heart of Mary Parish and active in the Galesburg Knights of Columbus with her husband Dave, deputy grand knight. 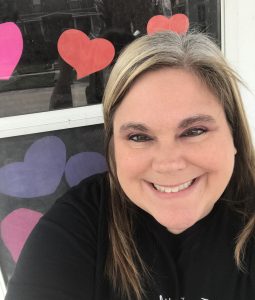 Krista Wynes of Galesburg is framed by some of the hearts she has encouraged people to display through her new Facebook group, Heart Hunters.(Provided photo)

The idea came from a Facebook post that showed a white house with a big red heart in the window.

“It spoke to me,” Wynes told The Catholic Post. “I thought this is something I can do with my kids to get them out of the house as we’re trying to establish some new schedules and get them moving since we don’t have a lot of options for going to the park and playing on the playground equipment or being with friends.”

Catholic schools in the Diocese of Peoria have been closed since March 13 and were not scheduled to reopen until after Easter. E-learning or online learning was to begin by March 31 at the latest and started sooner in many places.

Wynes’ sons, Lincoln, sixth grade, and Harrison, second grade, attend Costa Catholic Academy in Galesburg and are engaged in e-learning at home until the pandemic passes. A certified ophthalmic technician at Illinois Eye Center in Peoria, she accepted a voluntary layoff to stay home with them.

She first posted the idea to Galesburg Rocks, a group that at one time had invited people to paint and hide rocks for children to find. A woman who saw what Wynes was proposing encouraged her to start a Facebook group of her own.

Her “social distance scavenger hunt,” which launched on March 21, soon became so much more, however. Not only have people who are out walking and driving been “collecting” hearts, but it has touched those who are ill or quarantined, and the elderly who can’t get out, she said.

“I get these beautiful private messages from people I don’t know telling me how it’s awesome to be able to open up Facebook and scroll through and look at everyone else’s hearts and how it makes them forget for a while what’s going on,” Wynes shared.

One senior told her that even though she doesn’t usually spend much time on Facebook, she spent an entire day recently on the Heart Hunters page, because it provided a needed respite.

“I’ve been moved to tears many times from the posts I’ve received from people,” Wynes said.

It has also moved her to prayer.

“I’ve private messaged several people who have messaged me and promised to pray for them. I’ve said rosaries for people,” Wynes told The Post.

“I get these beautiful private messages from people I don’t know telling me how it’s awesome to be able to open up Facebook and scroll through and look at everyone else’s hearts and how it makes them forget for a while what’s going on.” — Krista Wynes

One of them was a man who told her that his father had COVID-19 and was on a ventilator. It looked like he was improving, but he had a setback.

“He was one where I sent back a message saying, ‘I will say some prayers for your dad and I want you to know I will say a rosary for him, as well’ not knowing if he was Catholic or not, but it was what I was going to do,” she said. “He messaged me back and said, ‘You have no idea how much that means to me. My family and I have said a lot of rosaries and a lot of prayers.’”

When she asked if would be OK to have a Mass said for his father, the man agreed. It was offered by Father Jacob Rose, parochial vicar of the Galesburg Catholic community.

“So there’s been a lot of really, really heartwarming, touching things,” Wynes said. “It’s been incredible to know this group has touched so many lives.”

On March 28, the one week anniversary of Heart Hunters, the group already had 500,000 members. Just four days later, it went over 650,000. All 50 states are represented, as are 46 countries, and each one is colored in on a map that is being maintained by one of the moderators.

Wynes said this has provided a nice geography lesson for her sons, as they scroll through the posts and see where people are from each day. 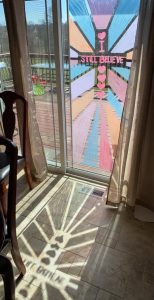 “I think there are a lot of people in the world who are searching for something good and something else to focus on besides all of the bad and all of the information,” she said. “We get overwhelmed with all of the media coverage of COVID-19 and I understand it needs to be there, but there’s a point when I think everybody should, if they don’t already, walk away and find something positive and something good to focus on. And I think this was an easy way to do that.”

Heart Hunters is a public group on Facebook and its 15 administrators and moderators are monitoring posts to make certain people abide by a few simple rules. For example, visitors and followers are asked to be kind and courteous, and not to engage in hate speech, bullying or promotions. Politics are not permitted.

Others are doing similar things to lift people’s spirits, with children searching for hearts and teddy bears.

Seeing the creative and colorful posts of how people are sharing their hearts in these troubling times isn’t the only thing that is heartening for Wynes. She said her Catholic faith gives her hope and strength for the future.

“I guess what I hope to see come out of this (crisis) is people returning to church,” she said. “I hope they start coming back to Mass. I hope that we see the Catholic faith start to grow again. . . . I’m quite hopeful that that’s going to happen.”