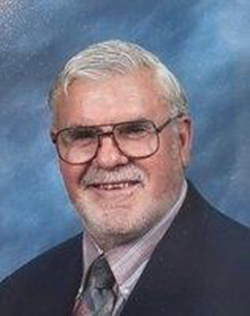 WASHINGTON — Deacon Charles L. Robbins, a permanent deacon who served St. Monica Parish in East Peoria since his ordination in 2002, died at home on Friday, March 27, 2020. He was 72.

Services will be private, with burial at Hillcrest Memorial Gardens in Morton. A public memorial Mass will take place at a later date.

He worked at Caterpillar Tractor Co. for 30 years, and later was a custodian for Washington District #50 schools.

He was ordained to the permanent diaconate for the Diocese of Peoria in 2002 and assigned to St. Monica Parish. In addition to service to the parish, Deacon Robbins brought Communion to patients at OSF Saint Francis Medical Center in Peoria and presided at Communion services at Riverview in East Peoria and Lutheran Hillside Village in Peoria. Deacon Robbins also served as the spiritual adviser for the Knights of Columbus, Msgr. Grzybowski Council No. 7580 in East Peoria, and assisted at the Peoria Rescue Mission.

In addition to his wife, Deacon Robbins is survived by two sons, Tony Robbins of Yorkville and Jeremy (Samantha) Robbins of Metamora; a brother, Ben (Patsy) Moye of Peoria; two grandchildren, Josh and Carey; and several cousins.

He was preceded in death by his foster parents, Paul and Elizabeth Pirck; a brother, George Moye; and an infant daughter.

Memorials may be made to St. Jude Midwest Affiliate or to Father Larry or Father Julius Missions at St. Monica Church. Condolences to the family may be shared at deitersfuneralhome.com.