COVID-19 is not God’s judgment, but a call to live differently, Pope Francis says 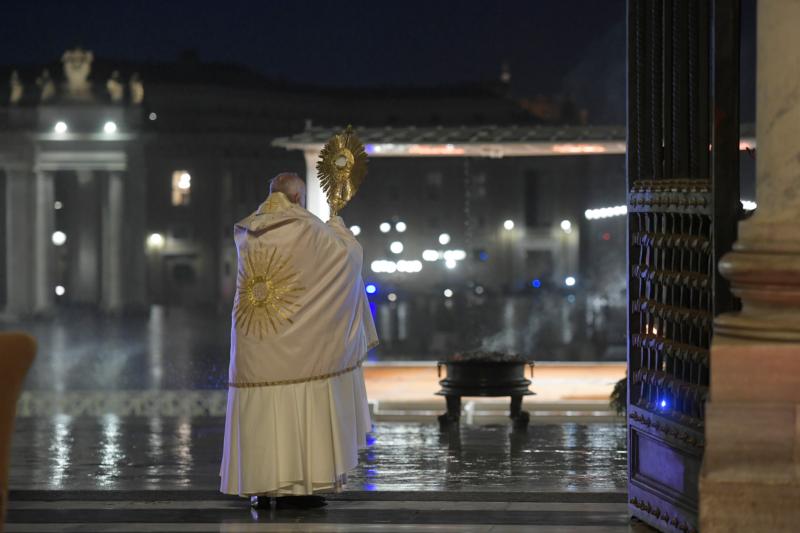 Pope Francis holds the monstrance as he delivers his extraordinary blessing "urbi et orbi" (to the city and the world) during a prayer service in the portico of St. Peter's Basilica at the Vatican on March 27. The service was livestreamed in the midst of the coronavirus pandemic. (CNS/Vatican Media)

VATICAN CITY (CNS) — The worldwide coronavirus pandemic is not God’s judgment on humanity, but God’s call on people to judge what is most important to them and resolve to act accordingly from now on, Pope Francis said.

Addressing God, the pope said that “it is not the time of your judgment, but of our judgment: a time to choose what matters and what passes away, a time to separate what is necessary from what is not. It is a time to get our lives back on track with regard to you, Lord, and to others.” 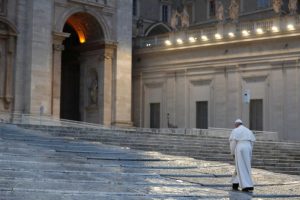 Pope Francis arrives for a prayer service in an empty St. Peter’s Square at the Vatican March 27. (CNS/Yara Nardi, pool via Reuters)

Pope Francis offered his meditation on the meaning of the COVID-19 pandemic and its implications for humanity March 27 before raising a monstrance with the Blessed Sacrament and giving an extraordinary blessing “urbi et orbi” (to the city and the world).

Popes usually give their blessing “urbi et orbi” only immediately after their election and on Christmas and Easter.

To watch a replay of the service in its entirety, click here.

“INVITE JESUS INTO THE BOATS OF OUR LIVES”

Pope Francis opened the service — in a rain-drenched, empty St. Peter’s Square — praying that the “almighty and merciful God” would see how people are suffering and give them comfort. He asked to care for the sick and dying, for medical workers exhausted by caring for the sick and for political leaders who bear the burden of making decisions to protect their people.

The service included the reading of the Gospel of Mark’s account of Jesus calming the stormy sea.

“Let us invite Jesus into the boats of our lives,” the pope said. “Let us hand over our fears to him so that he can conquer them.”

Like the disciples on the stormy Sea of Galilee, he said, “we will experience that, with him on board, there will be no shipwreck, because this is God’s strength: turning to the good everything that happens to us, even the bad things.”

The Gospel passage began, “When evening had come,” and the pope said that with the pandemic and its sickness and death, and with the lockdowns and closures of schools and workplaces, it has felt like “for weeks now it has been evening.”

“Thick darkness has gathered over our squares, our streets and our cities; it has taken over our lives, filling everything with a deafening silence and a distressing void that stops everything as it passes by,” the pope said. “We feel it in the air, we notice it in people’s gestures; their glances give them away.

“We find ourselves afraid and lost,” he said. “Like the disciples in the Gospel we were caught off guard by an unexpected, turbulent storm.”

However, the pandemic storm has made most people realize that “we are on the same boat, all of us fragile and disoriented,” the pope said. And it has shown how each person has a contribution to make, at least in comforting each other.

PANDEMIC EXPOSES OUR VULNERABILITY, THE SERVANTS AMONG US

The pandemic, the pope said, has exposed “our vulnerability and uncovers those false and superfluous certainties around which we have constructed our daily schedules, our projects, our habits and priorities.” 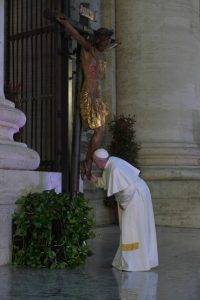 Pope Francis kisses the feet of a crucifix from the Church of St. Marcellus in Rome during a prayer service in an empty St. Peter’s Square at the Vatican March 27. The crucifix was carried in Rome in 1522 during the “Great Plague.” (CNS/Vatican Media)

In the midst of the storm, Pope Francis said, God is calling people to faith, which is not just believing God exists, but turning to him and trusting him.

As Lent and the pandemic go on, he said, God continues to call people to “convert” and “return to me with all your heart.”

It is a time to decide to live differently, live better, love more and care for others, he said, and every community is filled with people who can be role models — individuals, “who, even though fearful, have reacted by giving their lives.”

Pope Francis said the Holy Spirit can use the pandemic to “redeem, value and demonstrate how our lives are woven together and sustained by ordinary people — often forgotten people — who do not appear in newspaper and magazine headlines,” but are serving others and making life possible during the pandemic.

The pope listed “doctors, nurses, supermarket employees, cleaners, caregivers, providers of transport, law and order forces, volunteers, priests, religious men and women and so very many others who have understood that no one reaches salvation by themselves.”

“How many people every day are exercising patience and offering hope, taking care to sow not panic but a shared responsibility,” he said. And “how many fathers, mothers, grandparents and teachers are showing our children, in small everyday gestures, how to face up to and navigate a crisis by adjusting their routines, lifting their gaze and fostering prayer.”

“How many are praying, offering and interceding for the good of all,” he said. “Prayer and quiet service: These are our victorious weapons.”

“WE HAVE AN ANCHOR, A RUDDER, HOPE”

In the boat, when the disciples plead with Jesus to do something, Jesus responds, “Why are you afraid? Have you no faith?”

“Lord, your word this evening strikes us and regards us, all of us,” the pope said. “In this world that you love more than we do, we have gone ahead at breakneck speed, feeling powerful and able to do anything.

“Greedy for profit, we let ourselves get caught up in things and be lured away by haste. We did not stop at your reproach to us, we were not shaken awake by wars or injustice across the world, nor did we listen to the cry of the poor or of our ailing planet,” Pope Francis said. 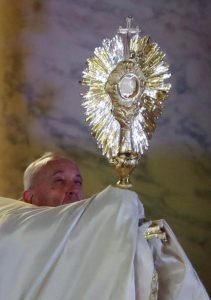 Pope Francis holds the monstrance as he gives his extraordinary blessing “urbi et orbi” (to the city and the world) from the atrium of St. Peter’s Basilica at the Vatican March 27. (CNS/Yara Nardi, pool via Reuters)

“We carried on regardless, thinking we would stay healthy in a world that was sick,” he said. “Now that we are in a stormy sea, we implore you: ‘Wake up, Lord!'”

The Lord is calling on people to “put into practice that solidarity and hope capable of giving strength, support and meaning to these hours when everything seems to be foundering,” the pope said.

Pope Francis told people watching around the world that he would “entrust all of you to the Lord, through the intercession of Mary, health of the people, and star of the stormy sea.”

“May God’s blessing come down upon you as a consoling embrace,” he said. “Lord, may you bless the world, give health to our bodies and comfort our hearts. You ask us not to be afraid. Yet our faith is weak, and we are fearful. But you, Lord, will not leave us at the mercy of the storm.”

Introducing the formal blessing, Cardinal Angelo Comastri, archpriest of St. Peter’s Basilica, announced that it would include a plenary indulgence “in the form established by the church” to everyone watching on television or internet or listening by radio.

An indulgence is a remission of the temporal punishment a person is due for sins that have been forgiven. Catholics following the pope’s blessing could receive the indulgence if they had “a spirit detached from sin,” promised to go to confession and receive the Eucharist as soon as possible and said a prayer for the pope’s intentions.