Eucharistic adoration ‘cut me to the heart,’ says RCIA candidate from Morton 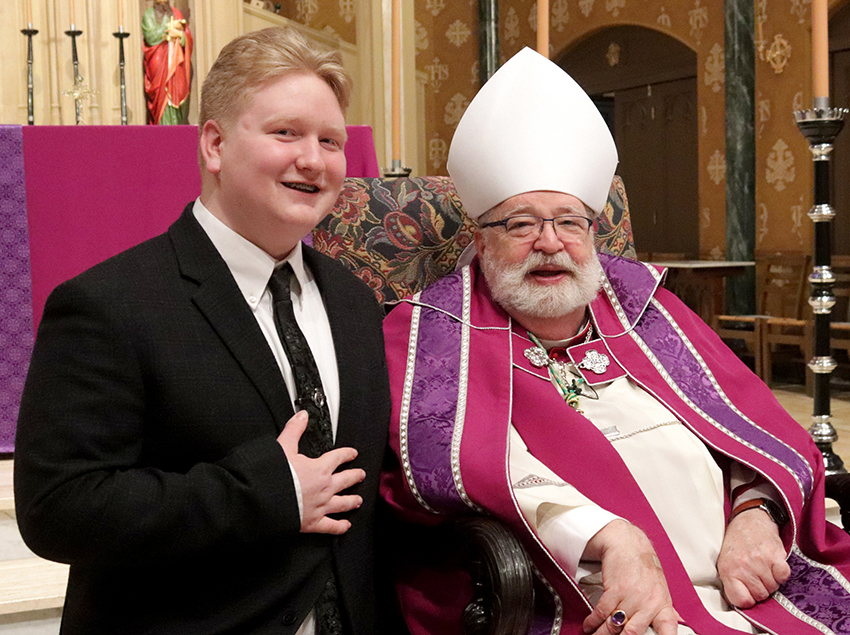 Henry Wefer, who is preparing to be received into the church at St. Monica in East Peoria at the Easter Vigil, enjoys a moment with Bishop Daniel R. Jenky, CSC. “He was very quick to a joke, which I think suits him well,” he said of the bishop. (The Catholic Post/Jennifer Willems)

While many people who attended the Rite of Election and Call to Continuing Conversion were at St. Mary’s Cathedral for the first time, it has become something of a spiritual home for Henry Wefer from Morton. In fact, it was encountering Jesus in the Eucharist during adoration that brought him to where he is now.

Baptized in the Anglican Church, he said his family started attending a Methodist church when he was in the second grade. During his freshman year at Morton High School a bout of chronic headaches left him in “searing pain” — and doubt.

“There were times I went three or four days without being able to sleep,” Wefer told The Catholic Post. “If you’re sitting in the dark trying to avoid all sound and light, pretty much the only thing you can do is cry out to God. Nothing happened.”

It was when his father talked him into going on a mission trip to Bayou Le Batre, Louisiana, that things began to change. Doing community outreach, working in a daycare, and spending time in prayer helped him to kneel down eventually and say, “This is it. I’m done fighting God.”

His faith journey took him to the Greek Orthodox Church in Peoria, where he found the service to be beautiful and spiritually uplifting. But something wasn’t quite right yet, Wefer said.

Last summer, he took a tour of St. Mary’s Cathedral. It was a Friday, so eucharistic adoration was taking place in the St. Thomas More Chapel.

“When we walked in, it cut me to the heart. I can’t describe it any other way,” Wefer said. “I was frozen at the door — I could not move.”

It was like standing in the presence of Jesus — body, blood, soul and divinity, he explained.

CENTER OF HIS LIFE

With his penchant for research, Wefer, a student at Illinois Central College in East Peoria, started looking online for information about the Catholic Church.

“When it comes to faith, I take it very seriously,” he said. “Every podcast I listen to has some sort of faith basis. Every time I’m reading, it’s some sort of book that has to do with faith. My whole life is centered around this.”

His viewing has including many episodes of “Life is Worth Living,” featuring one of his heroes of the faith, Venerable Archbishop Fulton J. Sheen. Wefer said he hopes to read all of his books someday.

Most weeks include two trips to St. Mary’s Cathedral for prayer — three if he can manage it.

His research led him to nearby St. Patrick Church in Washington and St. Monica Church in East Peoria, which are linked parishes. He went to Mass for a time, looking up what he didn’t know. He also learned about the RCIA process and then approached Father Johnathan Steffen, pastor.

Wefer has been attending the Wednesday night sessions since last fall.

There are many reasons he wants to enter the Catholic Church, he said, but chief among them is that it is “the true church of Christ.”

“This is the barque of Peter. I want to be on the boat,” he said.

And the more he learns, the more everything makes sense, according to Wefer, who would also like to take on the “Summa Theologica” by St. Thomas Aquinas

“I just want to live in the church — a life of prayer, devotion. Being with God,” he told The Post.