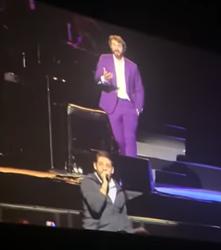 Singer Josh Groban and Father Patrick Setto, assistant pastor of Mother of God Chaldean Catholic Church in Southfield, Mich., are pictured in a Youtube screenshot during a Feb. 9, 2020, concert in Windsor, Ontario. Groban, a world-famous tenor, passed the microphone to the priest, who began singing "To Where You Are" and was met with immediate cheers and applause. (CNS photo/Youtube)

WINDSOR, Ontario (CNS) — Everything about that Sunday night was a surprise for Father Patrick Setto, starting with his cousins surprising him with tickets to a Josh Groban concert in Windsor, across the border from Detroit, and ending with the world-famous tenor passing off his microphone to the priest.

As several videos from the Feb. 9 concert making the rounds online show, Groban bantered with the audience and asked them for song requests. At the urging of his cousin, Father Setto then shouted out to Groban, telling him he would sing with him. 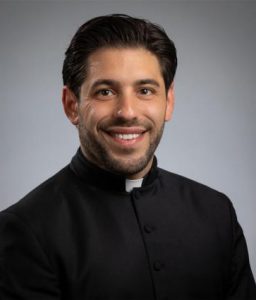 After Groban handed the priest the microphone, Father Setto began to sing “To Where You Are” and was met with immediate cheers and applause.

“He was taking a complete chance because I could have been a really bad singer,” said Father Setto, assistant pastor of Mother of God Chaldean Catholic Church in Southfield, Michigan, in the Detroit Archdiocese.

“I have no idea how or why he allowed that, but it was very generous of him,” the priest told Detroit Catholic, the digital news service of the Archdiocese of Detroit.

As Father Setto sang with his back turned to Groban, the singer began to jokingly mime singing and pretended to reach out in desperation for the mic.

“I think I sang a little longer than I should (have); maybe I got carried away with it, but I wasn’t sure because there was clapping,” Father Setto laughed. “It really was playful and a lot of fun. He was a good sport.”

“I’ve been singing all my life, and he has really always been my musical inspiration,” the priest said. “It has always been a dream of mine to be able to sing with him or sing for him or just meet him because he has really helped to train and develop my own musical skills.”

Father Setto doesn’t think the interaction was an accident and attributes it to Marian intercession and divine providence.

During the drive to the concert, Father Setto said nine “Memorares,” praying that he would be able to meet Groban; the prayers seek Mary’s intercession. His cousin laughed and made a video of him praying to meet the singer.

But then, from the ninth row at The Colosseum at Caesars Windsor, Father Setto’s prayer was answered.

While Groban comes from a Jewish and Episcopalian background, Father Setto said he doesn’t know whether the singer still practices his faith. However, many of Groban’s songs have an indirect spiritual message or Christian themes, he said. 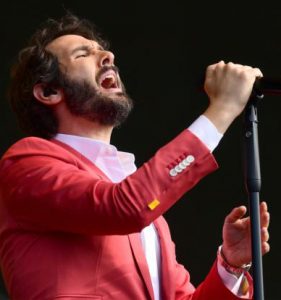 Upon returning to his seat after singing, Father Setto got Groban’s attention again by telling him he was a Catholic priest. The floored and slightly flustered Groban (who had just cursed moments before) quipped, “I am surprised that you didn’t do ‘My Confession'” — one of Groban’s songs that Father Setto believes has a deeper, spiritual meaning.

Father Setto said he’s surprised by how much attention the moment received — one video already has nearly 100,000 views — but he hopes his 15 minutes of fame can inspire good.

“I really want the world to know that, as priests, we are human and we can relate. We have gifts and we want to share those gifts with the world, and that’s really a way of evangelization,” Father Setto said.

He said that with the current negative perceptions of priests, perhaps the video can help people understand the humanity of the priesthood and that it’s OK to love God and that following Christ is a joy.

Further, he hopes Catholics who already understand the faith will gain a deeper understanding of the power of prayer.

“I prayed those nine ‘Memorares’ specifically to meet him, and while I didn’t get to meet him how I imagined, God answers your prayers in other ways,” Father Setto said. “He exceeds your expectations; He takes it to another level, which is so beautiful because our God is so good.”

Patti is a reporter at Detroit Catholic, the digital news service of the Archdiocese of Detroit. Below is a rough YouTube video from the concert provided by the St. Thomas Chaldean Catholic Diocese U.S.A.