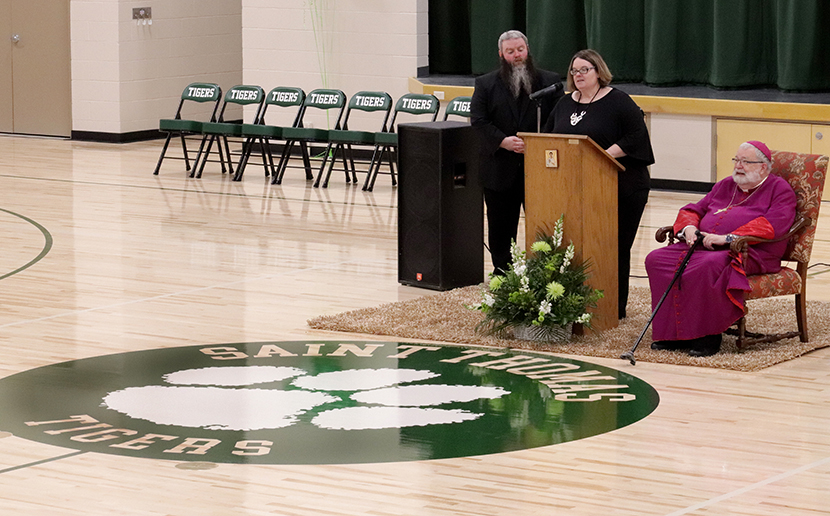 St. Thomas principal Lisa Doughan thanks the many people who had a hand in the planning and construction of the new Trost Learning Center and Gymnasium, including the late Robert H. Trost, a major benefactor. Looking on is Father Keith Walder, pastor, and Bishop Daniel R. Jenky, CSC, who said he was proud of the work the parish had done to accomplish "the magnificent renewal of your school." The Catholic Post/Jennifer Willems)

PHILO — After coming from the new Trost Learning Center and Gymnasium at St. Thomas School, Bishop Daniel R. Jenky, CSC, had just one word as he started Mass Jan. 25: “Wow.”

“I’m so proud of what God has done through you with that magnificent addition to the school,” he said as he greeted the St. Thomas parishioners and school families.

Following Mass he would take center court in the gymnasium to offer a prayer and sprinkle holy water — with the permission of Father Keith Walder, pastor — on the shiny new hardwood floor that bears a giant paw print and the name of the St. Thomas Tigers.

The festivities included an open house and dance for school families and parishioners to get their celebration of Catholic Schools Week off to an energetic start. 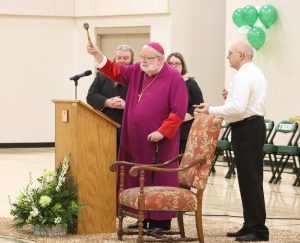 After leading a prayer that the addition at St. Thomas School in Philo would become a place where students and teachers would learn to know God as the source of all truth, Bishop Jenky sprinkles holy water in blessing on Jan. 25. (The Catholic Post/Jennifer Willems)

The addition was made possible by $5 million in gifts from Robert H. Trost and the Trost Living Trust. When the former St. Thomas student and longtime supporter of the school made his initial gift of $1 million in 2015, he challenged the parish to match it so they would take true ownership of the project.

Not only have they done that, but they are closing in on $2 million, according to Father Walder, who said the fundraising continues.

The project originally called for a new school entrance, four classrooms, administrative offices and a workroom for the teachers. With additional gifts from the Trost Living Trust, the plans were expanded to include the gym.

The new addition was ready to use when classes started in August and now houses two classrooms for preschool and kindergarten-first grade, and a band and music room, as well as the teacher workroom, said Lisa Doughan, principal. The preschool has a dedicated playground that is fenced in.

Doughan has an office and there is a large reception area to greet parents and guests. Secretary Jana Boyer is able to monitor who is coming and going through the double security doors at the new school entrance.

The gym area includes a stage, locker rooms and a coach’s office. That area was designed to be the school’s tornado shelter.

Some work is still being done on the gym and Father Walder said they anticipate being able to use it sometime this month.

“It’s been wonderful. It’s definitely been a huge blessing for our students and our staff,” Doughan told The Catholic Post. “Adding the gym now will be wonderful, too. I know everyone is excited to get in there and start using it every day.”

Explaining that every “nook and cranny” of St. Thomas School had been used before, Doughan said some spaces were doing double duty. The foyer, for example, was also used for aftercare and the music room. 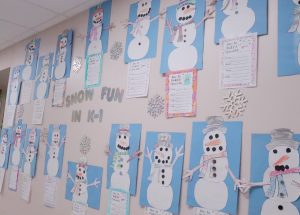 St. Thomas School in Philo has multi-age classrooms and kindergarten-first grade occupies part of the new Trost Learning Center. Student artwork provided a joyful welcome during the open house that followed the blessing and dedication on Jan. 25. (The Catholic Post/Jennifer Willems)

“It’s amazing how we were able to better use both the existing space plus the new addition,” she said. “I don’t know how we ever survived without it.”

“This is the nicest room I’ve ever taught in,” said Jenny Eisenmenger, who is one of the new preschool teachers. “It’s a wonderful environment anyway because of the staff and everything, but when you add such nice surroundings it makes it a place you want to come in the morning.”

During the dedication and blessing ceremony, Doughan thanked Father Walder and the former pastors who had a hand in the project, including Father Bowan Schmitt and Father Robert Lampitt, who concelebrated the Mass on Saturday night. She also credited her predecessor, Melissa Reder, for her work.

She offered words of gratitude to capital campaign and building committee members, education commission and finance committee members, and the many donors and benefactors “who believed in our school and wanted to ensure quality Catholic education for generations to come.”

The architect for the project was Bob Kapolnek of KAP Architecture LLC of Champaign. General contractors were Petry Kuhne Company, also of Champaign.

Representing Dr. Sharon Weiss, superintendent of Catholic schools for the Diocese of Peoria, were associate superintendents Jerry Sanderson and Dr. Susan Stolt. Sanderson said he became familiar with St. Thomas School when he was a student at the University of Illinois.

“To see where it’s come today is just amazing,” he told The Post. “It’s very, very impressive and it’s all due to the wonderful Catholic community here and, of course, the benefactor they had, as well. It’s tremendous to see what the Holy Spirit can do.”

Sanderson noted that the school has doubled its enrollment over the last decade and said, “This is just the beginning of more great things to come.”