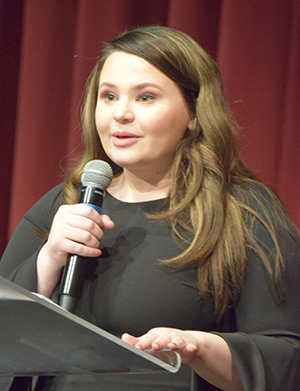 Like a driver whose car begins to slide uncontrollably on a freeway that has turned foggy and icy, Rebekah Hagan — then a frightened, pregnant, single, teenaged mother of one — looked for and took the closest “exit ramp.”

It led to an abortion clinic. 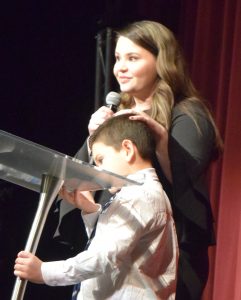 “This is who you are standing up for, who you are fighting for,” said Rebekah Hagan after bringing her son, Zachariah, to the stage. “And he’s worth it.” (The Catholic Post/Tom Dermody)

“In a moment of panic and not thinking clearly, I decided abortion was the most compassionate and almost ‘sacrificial’ choice I could make,” Hagan, a California native now 25, told those attending the Sanctity of Human Life Rally in Peoria on Jan. 21.

“Obviously, that’s not rational thinking,” she continued, “but when you’re in a fight-or-flight, fear-based mentality it’s easy to think up is down and right is wrong.” Encouraging her audience to consider how even a Christian, pro-life young woman such as herself could make a string of bad choices, Hagan described how the fog of confusion lifted moments after she had taken the first pill to end her seven-week pregnancy via a two-step medication abortion.

Quick research led Hagan to a doctor who prescribed progesterone injections to counter the pill. The treatment saved her unborn child, and Hagan ended her intensely personal talk by welcoming her now 6-year-old son, Zachariah, to the stage at Riverside Community Church.

“This is who you are standing up for, who you are fighting for,” Hagan told the group. “And he’s worth it.”

“AN ARMY COMING TOGETHER”

The rally, sponsored annually by Central Illinois Right to Life, takes place on or near the Jan. 22 anniversary of the U.S. Supreme Court decisions legalizing abortion. The evening began with about 100 participants — many of them holding signs with messages such as “Abortion takes a human life” and “Jesus forgives and heals” — prayerfully walking around the Peoria County Courthouse block located across the street from the church in downtown Peoria. 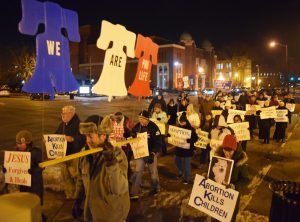 Bill Shipton, a member of Blessed Sacrament Parish in Morton, carries a pro-life sign near the front of the Prayer Walk for Life on Jan. 21 in Peoria. The sign was one of several created and brought to the event by Lawrence Meyer of Immaculate Conception Parish in Manito. (The Catholic Post/Tom Dermody)

“Lord Jesus, you know that right here in central Illinois there is an army coming together that is ready to stand for the rights of the unborn,” said John King, retired pastor of Riverside Community Church, in an opening prayer.

Ken Goins of Central Illinois Right to Life urged prayers for state and national lawmakers and invited the crowd to support local pro-life outreaches, many of which had information tables set up in the church basement where refreshments were served following the program.

Hagan, who spoke earlier that day at two area high schools including Peoria Notre Dame, said that “so much of what we think as young people is dependent upon what the world tells us is OK.” She described how abortion providers failed to give adequate information or counseling in her time of need.

“I was in no way physically, mentally, or spiritually ready for this decision,” said Hagan. She noted the second step of the medication abortion would have had her, at age 18, deliver her tiny baby alone on the toilet in the bathroom of her parents’ home.

“Please don’t be silenced,” urged Hagan, who is now married and expecting her fourth child. “Don’t be afraid to tell women ‘I think you deserve better than abortion,’ and that ‘Your baby has value and is made in the image of God.’”

“I encourage you to say ‘yes’ to whatever God is calling you to,” she concluded.

Among those attending the rally was Lawrence Meyer of Immaculate Conception Parish in Manito. In the march, he carried one of several, large handcrafted signs that he has created and brings to pro-life events and parades throughout the region. Each features three Liberty Bell images in red, white and blue cut from corrugated plastic with pro-life phrases stenciled on the bells.

“I’m not criticizing anyone who has had an abortion,” emphasized Meyer. “I’m hoping that those who might be thinking about abortion come to know it is murder, and change a few minds that way.”

EDITOR’S NOTE: Rebekah Hagan learned she was not alone in regretting her decision after taking the first dose in a medication abortion. She encourages those in similar circumstances to call an Abortion Pill Reversal hotline at (877) 558-0333 or visit AbortionPillReversal.com.